Cyprus has been more successful than most countries in tackling the pandemic coming fifth in a global COVID Performance Index of 98 nations.

It is the highest-ranked European country and was only outperformed by top-place New Zealand, Vietnam, Taiwan, and Thailand based on six criteria, including confirmed cases, deaths and testing metrics.

Sydney-based Lowy Institute index placed Britain and America near the bottom end with Brazil propping up the pile.

Data published on Thursday excludes China, where the first cases were identified in December 2019, due to lack of publicly available data.

Other countries in the top 10 include Rwanda, Iceland, Australia, Latvia, and Sri Lanka – countries with fewer reported cases and deaths both in aggregate and per capita terms.

In total, 98 countries were evaluated in the 36 weeks that followed their hundredth confirmed case of COVID-19, using data available to January 9, 2021.

Cyprus surpassed 100 cases on March 23 on the eve of its first national lockdown. 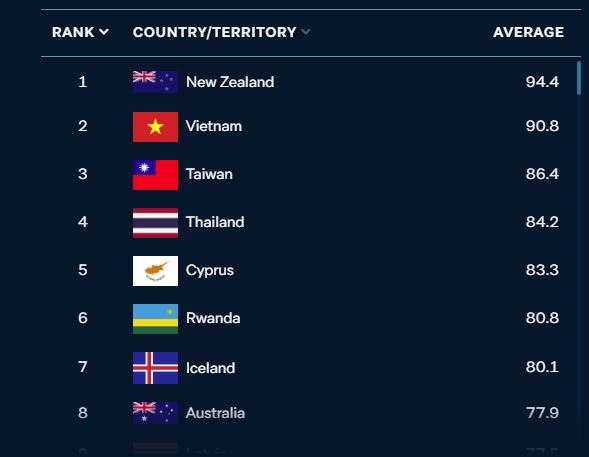 The United States, with over 25 million confirmed cases, ranked 94 while India, with more than 11 million cases, was 86th.

Britain, with the highest number of deaths in Europe, stood at the 66th spot.

The index showed countries in Asia-Pacific proved the most successful in containing the pandemic as Europe and the United States were “quickly overwhelmed” by the rapid spread of COVID-19.

“Levels of economic development or differences in political systems between countries had less of an impact on outcomes than often assumed or publicised,” the Lowy Institute said in its analysis.

“In general, countries with smaller populations, cohesive societies, and capable institutions have a comparative advantage in dealing with a global crisis such as a pandemic.”

In bottom place at number 98 was Brazil, closely followed by Mexico, Colombia, Iran, and the United States.

Brazil has recorded more than 218,000 coronavirus deaths — a toll second only to that of the United States.

For much of the last year, the two most populous nations in the Americas have been led by nationalist leaders who have actively downplayed the threat of Covid-19, ridiculed mask-wearing, opposed lockdowns and contracted the virus themselves.

The Lowy Institute said that there was no clear winner when it came to which political system best handled the pandemic.

Instead, almost across the board, the response has been lacklustre.

“Some countries have managed the pandemic better than others — but most countries outcompeted each other only by degrees of underperformance,” the report said.

Smaller nations — with populations of fewer than 10 million people — did appear to have some advantages.

“In general, countries with smaller populations, cohesive societies, and capable institutions have a comparative advantage in dealing with a global crisis such as a pandemic.”

Overall, levels of economic development and differences in political systems between countries had less of an impact on outcomes than these other indicators.

The study seems to back the argument that regime type was not the determining factor in how effectively states responded, “but whether citizens trust their leaders, and whether those leaders preside over a competent and effective state”.

The Institute’s Herve Lemahieu said the research disproved the claim authoritarian regimes had an advantage in handling the global pandemic.

He said smaller countries were able to “ring-fence” their populations, while their larger counterparts had issues in being able to close external and internal borders.

“Also, countries with smaller populations may well have stronger social contracts between governments and citizenry and greater levels of trust in governments.” (source Agencies)

Maronites hope Pope can save them

The first trilateral meeting between Cyprus, Jordan and Greece is

Cyprus will experience cold weather as Wednesday night is expected

Bank of Cyprus is on track to return to steady

Maronites hope Pope can save them