In April, the number of registered unemployed increased by around 3,000 from the previous month, with the biggest impact from the COVID-19 fallout felt in the retail sector, construction, technical services, and manufacturing.

According to the monthly data issued by CyStat, the figure for registered unemployed rose from 28,591 in April 2020 to 32,933 in March this year and dropped slightly to 32,186 in April.

The newcomers in the labour market who were out of a job increased by 1,076.

CyStat warned the figures, based on Labour Department data from March 2020 and onwards, “is not considered safe” due to the three lockdowns, closure of many businesses and the furlough programme for employees working from home.

“This is due to the implementation by the Public Employment Service of the extraordinary measures announced by the Ministry of Labour for automatic renewals of registered unemployed and new registrations of unemployed people without their physical presence to avoid coronavirus spreading.”

The ‘seasonally adjusted’ figure is a statistical method that removes the effects of recurring seasonal influences, such as the hotel sector, where employment typically increases during holidays, while the industrial production index develops more weakly during the summer. 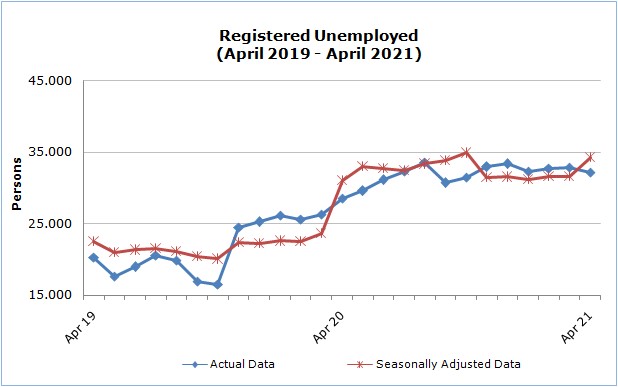 We’ll cross that bridge when we come to it

Cyprus reported another death attributed to COVID-19 on Saturday, with

Tourism Minister Savvas Perdios is optimistic Cyprus can prevent another

By Demetris Georgiades It is in the nature of Fiscal