Cyprus tops EU charts for COVID-19 testing while ranking fifth in the 27-member bloc for its vaccination rollout, the Health Ministry said on Monday.

The Health Ministry said Cyprus would continue to rely on free mass rapid testing to keep coronavirus in check, as one-fifth of the population took a COVID-19 test last week.

That translates to more than 20% of the population over 12 being tested in a week.

The EU Medicines Agency (ECDC) has advised countries to carry out mass tests to monitor the epidemiological situation due to new variants of the virus.

“Monitoring epidemiological indicators via mass testing schemes is one of the three pillars on which authorities are basing their strategy to confine the spread of the virus.

“Early detection of positive cases allows immediate intervention in areas where outbreaks occur, to limit the spread of the virus,” said a ministry statement.

Regular testing is also in place for employees back at work, while teachers and students over 12 must get tested weekly.

Enterprises with three people working in the same place must be tested weekly, while businesses with four to 10 people must ensure at least four are tested each week.

Workplaces with more than 10 staff need to test at least four people or 20% of employees each week, whichever is greater in number.

At least 50% of employees and athletes of team sports need to repeat the tests weekly. 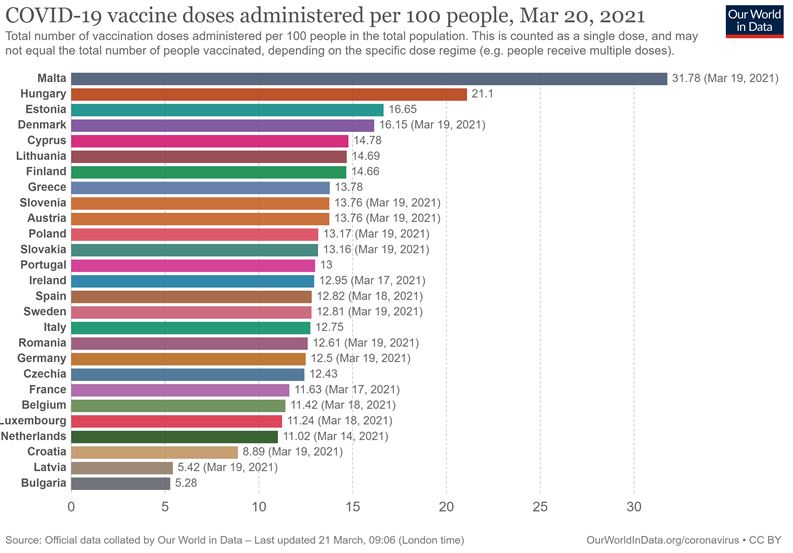 Malta, with half Cyprus’ population, tops the league with 31.78 doses for every 100,000 inhabitants.

Health Ministry spokesperson, Margarita Kyriacou, said a total of 131,623 coronavirus vaccinations had been administered in Cyprus by Sunday, of which 37,109 were individuals who received both their jabs.

The Ministry is currently focusing on carrying out vaccinations of vulnerable groups, hoping to cover them by the end of the month.

“So far, 1,714 people belonging to vulnerable groups have been vaccinated so far with the first dose.

“Actions are underway to increase the rate of vaccination of the vulnerable, to reduce the risk of serious illness in these individuals.

“Furthermore, some 225 bedridden patients have been vaccinated by mobile units,” said Kyriacou.