The signing on Thursday in Cairo of an agreement between the Egyptian and the Greek governments for the delineation of a segment of their sea boundaries, paves the way for a broader understanding which will enable the two countries to reach a comprehensive agreement to define their respective Exclusive Economic Zones (EEZ).

Diplomatic sources in Athens told the Financial Mirror that the agreement reached between Cairo and Athens is only the beginning of a much longer process which will see the two countries submit their case to international arbitration and seek judgment from either the International Maritime Tribunal in Hamburg or the International Court in the Hague.

Egypt and Greece signed the agreement designating an exclusive economic zone in the eastern Mediterranean between the two countries, an area containing promising oil and gas reserves, Egyptian Foreign Minister Sameh Shoukry said at a joint press conference with his Greek counterpart Nikos Dendias in Cairo.

“This agreement allows both countries to move forward in maximising the utilisation of the resources available in the exclusive economic zone, especially of the promising oil and gas reserves,” Shoukry said.

In Greece, diplomats said the deal effectively nullified last year’s accord between Turkey and the internationally recognised government of Libya that had agreed to maritime boundaries in a deal Egypt and Greece decried as illegal and a violation of international law.

Greece maintains that deal infringed on its continental shelf and specifically off the island of Crete.

“The agreement with Egypt is within the framework of international law,” Dendias said.

“It is the absolute opposite of the illegal, void and legally unfounded memorandum of understanding that was signed between Turkey and Tripoli. Following the signing of this agreement, the non-existent Turkish-Libyan memorandum has ended up where it belonged from the beginning, in the trash can.”

His statement came hours after Greece said it was ready to start exploratory talks on the demarcation of maritime zones with Turkey as early as this month.

Tensions were already high between Greece and Turkey over the exploration of energy resources in the eastern Mediterranean. The  two NATO members are also at odds over a range of issues from overflights in the Aegean Sea to maritime zones in the eastern Mediterranean and ethnically divided Cyprus following Turkey’s invasion in 1974 and occupation of the northern part of the island.

On June 9, Greece and Italy signed a similar agreement on maritime boundaries, establishing an exclusive economic zone between the two countries in the Ionian and Adriatic seas. 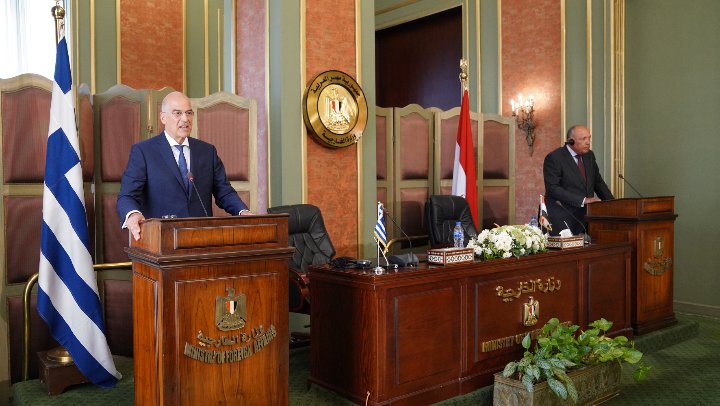 “Now, this new agreement reached between Greece and Egypt shows the resolve and determination of the Greek government and particularly of prime minister Kyriakos Mitsotakis to move on and resolve age long uncertainty and confusion over Greece’s legitimate sea boundaries”, a highly placed foreign diplomat  in Athens told the Financial Mirror.

“Although the agreement reached is partial, as can be clearly seen on the map, since it covers only 50% of the areas opposite the two countries, it is nevertheless a first step towards a more comprehensive agreement, which because of its complexity,  can only be reached by recourse to international jurisdiction.”, according to a senior legal expert with first hand knowledge of the UN Convention of the Law of the Sea (UNCLOS)

Highly placed sources at the Greek ministry of Foreign Affairs told the Financial Mirror that the government is fully aware of the limitations of the agreement signed, but it was felt necessary at this stage to openly engage Egypt, as the other major country in the region which has suffered as a result of Turkey’s provocation through the illegitimate Libyan-Turkish agreement of November 2019.

The same sources said that another major issue resolved through this agreement is confirmation that islands, such as Crete, Karpathos and Rhodes are eligible in assigning their own EEZ as foreseen in UNCLOS.

A major drawback of the present agreement, though, is the fact that half of Rhodes and the the entire island group of Kastelorizo are completely left out of the delineation boundaries.

Also, by leaving Kastelorizo completely out even at this early stage, Greece will have minimal chances in a forthcoming negotiation of establishing common sea boundaries with Cyprus.

This is an issue together with the western boundaries that will need to be resolved through the arbitration procedure.

According to diplomatic sources, recourse to international arbitration jointly by Greece and Egypt is regarded as a clever move since a decision reached through this process cannot be easily challenged by Turkey.

Switching to the ‘energy bible’

Cyprus reported one coronavirus death on Saturday, a drop in

We have studied the announcement by the Small Business Owners

COVID19: No end in sight, but will become endemic

After more than a year and a half of living

President Nicos Anastasiades appeared disappointed on Friday that the lack

Switching to the ‘energy bible’