Economists in the north fear that Turkish Cypriots will face the full brunt of the Turkish Lira’s collapse, as their overdependence on imports and funding from Ankara leaves no room to set their own fiscal policies.

The lira continues to lose ground reaching an all-time low on Friday with the Euro traded at 8.21 TRY.

The two leaders had gone head to head, with the U.S. leader demanding the release of an American Christian pastor and Ankara demanding the arrest and extradition from the U.S. of Fethullah Gulen, a Turkish religious leader of a Islamic civic society movement, alleged to have been the mastermind of the failed coup in Turkey on 15 July 2016.

Economist Mertkan Hamit told the Financial Mirror that the Turkish Cypriot community is in for a rough ride. Despite sharing the same currency as Turkey, Turkish Cypriots will have a harder time as they find themselves struggling with an ever-growing inflation due to their inability to adopt fiscal measures.

In an effort to explain why the Turkish Lira has taken such a beating in 2020, Hamit said that the world in January 2020 was not the same as the world in March 2020, as the coronavirus epidemic has changed all economic relations.

“In this new world, it would be unrealistic to expect Turkey’s fragile economy to weather out the pressures without sustaining blows. The crash of the Turkish Lira is the reflection of these blows,” said the economist.

Hamit said that Turkey’s authorities had not provided for unforeseen risks like the COVID-19 pandemic to their fiscal plans and were unable to respond to it.

He added that the Turkish Lira took another blow as the Euro gained value in international markets, linking this to the European Union’s 750 billion euro recovery fund.

“The Euro appeared to be a safe-haven, which had its effect on the Turkish Lira. International capital was moving towards safer investments, leaving Turkey,” argued Hamit.

Turning to how the crash of the Turkish Lira is affecting the lives of Turkish Cypriots, Hamit said that the community is feeling the blow harder than the Turkish economy, as trade, “in our case only imports, are made using a foreign currency, namely the US Dollar.”

“That being the case and since the trade is in dollars and the economy of the community is dependent on imports, the prices of daily goods are constantly rising. This triggers inflation,” he explained.

He also said that borrowing in the Turkish Cypriot community is mostly conducted in a foreign currency.

“Because investments such as buying a home or a car are of high value, banking institutions do not trust the Turkish lira, so lending agreements are carried out in British Pounds, Dollars or Euros”.

Borrowing is not done in the currency of the market and a rapid rise in the value of the Euro or the Dollar would mean that debtors are having difficulty in paying their loans, as their earnings are denominated in the local currency, the TRY.

He argued that as the investment opportunities in the Turkish Cypriot economy are narrow, the multiplier effect of the economy decreases.

“Not using a stable currency like the euro naturally enhances the effect of poverty,” he added.

The purchasing power of Turkish Cypriots is decreasing and the speed with which the economy’s wheels are turning is slowing down.

The economist said that traditionally strong sectors such as tourism, higher education and construction normally had the power to balance the market with foreign money.

“However, as the COVID-19 pandemic reached the island, goods sales to foreigners also decreased. It is not clear what the future of tourism is, while higher education in the north is also on shaky ground”.

“Under these conditions, one cannot but say that the future of the Turkish Cypriot economy is dark,” said Hamit.

He argued that the crisis has not yet spread to the banking sector, which still appears to be more reliable than the other sectors of the economy.

If that happens, then we will be talking about the collapse of the whole market, not just a crisis that affects households, which creates a difficult situation,” he explained.

Adding to the community’s ill fortune, the Turkish Cypriots have yet to receive any financial aid deriving from the Financial Protocol agreement with Turkey for 2020-21.

“This means there will be no public investments, making it even harder for the economy to revive,” added Hamit.

According to the agreement, Turkish Cypriots should be receiving 280.5 mln in support, of which 122 mln in grants and the rest in loans.

He further argued that the income distribution is changing in favour of the richest part of society, noting that, “while the Turkish Lira is tumbling, there has not been any development regarding the minimum wage,” in the north.

Wages in the north are adjusted to inflation levels every six months, with the latest adjustment scheduled for June 2020, but Turkish Cypriot authorities have been keeping quiet on the subject.

Asked whether the lack of control over their currency means that the community is unable to some extent to take fiscal measures to fend for itself, Hamit, acknowledging the limitations said, “there is room for us to draw some financial policies, however, the big problem is the relationship between the capital and politics in the community”.

He explained that he was referring to scandals like tax evasion and other similar cases in the past.

“There is a structural problem regarding the political administration in the north,” concluded Hamit.

Talking to Turkish Cypriot daily YeniDuzen earlier in the week, Dr. Erdal Guryay, professor at the Cyprus Science University (Kibris Ilim Universitesi), noted that that the Turkish Lira is continuously losing value in international markets due to the political and financial stalemate in Turkey, fuelled by the coronavirus outbreak. 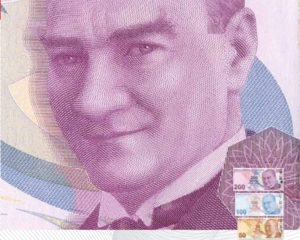 “Turkey had tried to keep the gap from widening, with swap agreements, essentially borrowing from other countries. Unfortunately, the tourism sector took a huge blow from the coronavirus outbreak, with Turkey not able to draw income from abroad,” said Guryay.

He argued that the situation will only get worse as the Turkish economic model is based on the flow of income from abroad, which has been frozen as tourism is not expected to pick up this year.

“However, as long as we continue to use TRY, we will remain under this risk. We cannot intervene, we can’t print money, we have no production, all our needs are met from abroad,” said Guryay.

He said that money from Turkey has also stopped flowing in.

“While governments around the world are providing financial aid to the people, we couldn’t do anything … ,” he concluded

Ercan Ayfer, the General Manager of a Turkish Cypriot bank, Capital Bank, was quoted as saying that as they are heavily depended on imports, this takes a toll on Turkish Cypriots.

“From food to real estate, our entire economy is indexed to a foreign currency. Even our daily consumer shopping at the market reflects the fluctuations of the currency exchange rates,” said Ayfer.

Echoing Ayfer’s arguments, another Turkish Cypriot economist, Mahmut Sezer, noted that political and economic developments in Turkey, combined with the community’s inability to take measures to fend for itself has led to its impoverishment.

“Our dependence on developments in Turkey combined with the (international) status of the community, has led to disorder. As a result, we have an unclear financial model,” said Sezer.

He further argued that the income distribution is changing in favour of the richest part of the society, noting that, “as you know, while the Turkish Lira is tumbling, there has not been any development regarding the minimum wage,” in the north.