Turkish Cypriots are being crushed under the weight of a collapsing Turkish Lira, as it continues to lose ground falling to an all-time low on Wednesday, with the Euro being traded at some point of the day at 8.18 TRY.

The last time the Turkish Lira was in trouble was back in 2018, when it had lost almost 40% of its value due to, according economists, a stand-off with US President Donald Trump.

The two leaders had gone head to head, with the U.S. leader demanding the release of an American Christian pastor and Ankara demanding the arrest and extradition from the U.S. of Fethullah Gulen, a Turkish religious leader of a Islamic civic society movement, alleged to have been the mastermind of the failed coup in Turkey on 15 July 2016.

Talking to Turkish Cypriot daily YeniDuzen, economists in the north see darker days ahead for their community. Despite having the same currency as Turkey, Turkish Cypriots will have a harder time as they find themselves struggling with an ever-growing inflation.

Dr. Erdal Guryay, professor at the Cyprus Science University (Kibris Ilim Universitesi) in the north, noted that that the Turkish Lira is continuously losing value in international markets due to the political and financial stalemate in Turkey, fuelled by the coronavirus outbreak. 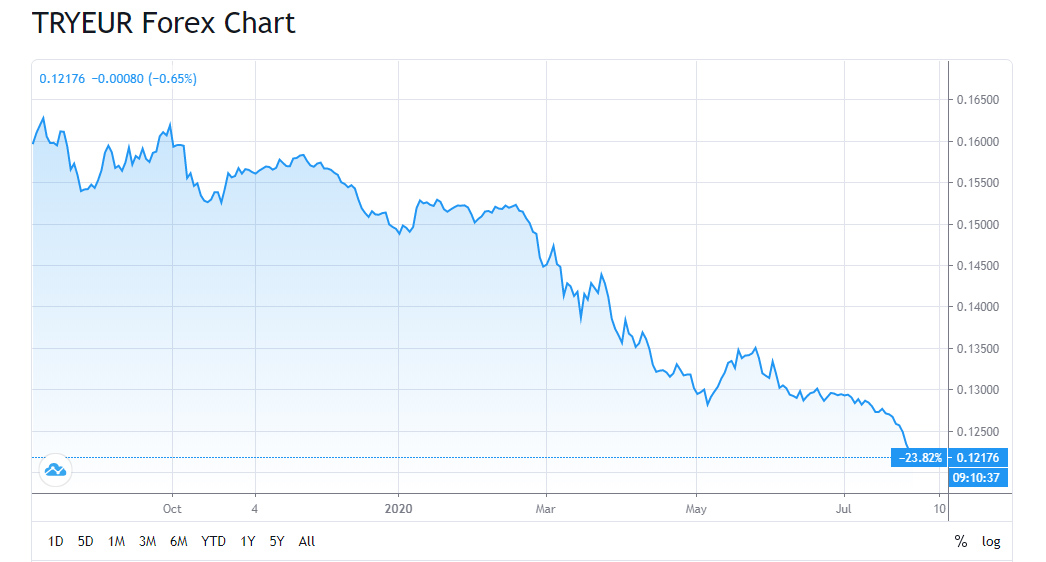 “Turkey had tried to keep the gap from widening, with swap agreements, essentially borrowing from other countries. Unfortunately, the tourism sector took a huge blow from the coronavirus outbreak, with Turkey not able to draw income from abroad,” said Guryay.

He noted that despite having the same currency as Turkey, the north has taken a bigger blow, as the Turkish Cypriot community relies on imports denominated in foreign currency as there is essentially no manufacturing output.

He argued that the situation will only get worse as the Turkish economic model is based on the flow of income from abroad, which has been frozen as tourism is not expected to pick up this year.

He added that at the same time, the European Union’s €750 bln coronavirus recovery fund has helped the Euro to gain value compared to the dollar.

“However, as long as we continue to use TRY, we will remain under this risk. We cannot intervene, we can’t print money, we have no production, all our needs are met from abroad,” said Guryay.

He said that money from Turkey has also stopped flowing in.

“While governments around the world are providing financial aid to the people, we couldn’t do anything … ,” he concluded

Ercan Ayfer, the General Manager of a Turkish Cypriot bank, Capital Bank, was quoted as saying that matters are made worse as almost every transaction Turkish Cypriots make is indexed to a foreign currency, namely the Euro, the Dollar and the Pound Sterling. As they are heavily depended on imports, this takes a toll on Turkish Cypriots.

“From food to real estate, our entire economy is indexed to a foreign currency. Even our daily consumer shopping at the market reflects the fluctuations of the currency exchange rates,” said Ayfer.

Echoing Ayfer’s arguments, another Turkish Cypriot economist, Mahmut Sezer, noted that political and economic developments in Turkey, combined with the community’s inability to take measures to fend for itself has led to its impoverishment.

“Our dependence on developments in Turkey combined with the (international) status of the community, has led to disorder. As a result, we have an unclear financial model,” said Sezer.

He further argued that the income distribution is changing in favour of the richest part of the society, noting that, “as you know, while the Turkish Lira is tumbling, there has not been any development regarding the minimum wage,” in the north.