Cyprus is experiencing a déjà vu as the daily coronavirus cases announced during the past two days resemble the announcements at the early stages of the COVID-19 outbreak when the country went into lockdown in mid-March.

Cyprus is seemingly losing control with the pandemic as it is once again reporting double digit cases after a period of three months, pushing the transmission rate R(t) to above 1, according to the latest epidemiological updated as of July 28.

For three months, the island’s health authorities had been reporting a low transmission rate, as calculation models reported an R(t) of under 1.

However, this is now in the past with three out of four models included in the ministry’s latest epidemiological report indicating that the rate is now close 1.2 to 1.3. That is, each person tested positive for COVID-19 transmits the virus to more than one person.

The high end of one of the four models has the Cyprus transmission rate at 1.92.

It does not include cases reported during the last two days, having experts worried that the actual Rt indicator is now well above 1. The number of local infections in recent weeks has grown to surpass those of imported infections which was the case in the previous two reports.

On Thursday, ten new coronavirus cases were recorded, of which six resulted from 280 samples taken through random testing in Limassol. The previous day saw Cyprus recording 13 cases, with seven in Limassol.

In total, 22.7% (n =209) of laboratory-confirmed COVID-19-cases had a history of travel or residence abroad during the 14 days prior to symptom onset (imported). 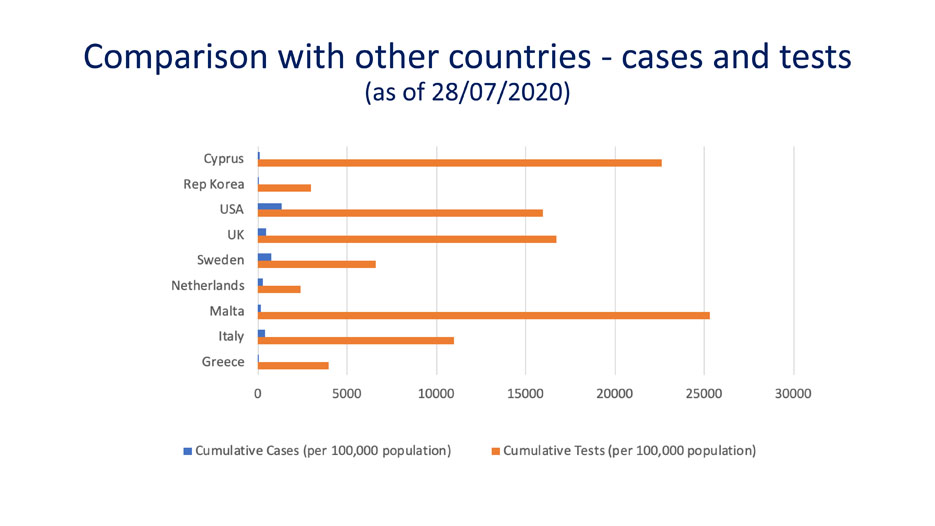 Nine deaths were reported among residents in Larnaca, eight in Paphos, four in Nicosia, three in Famagusta, and two in Limassol.

The median age of hospitalised patients was 62 years (IQR: 48-73years). 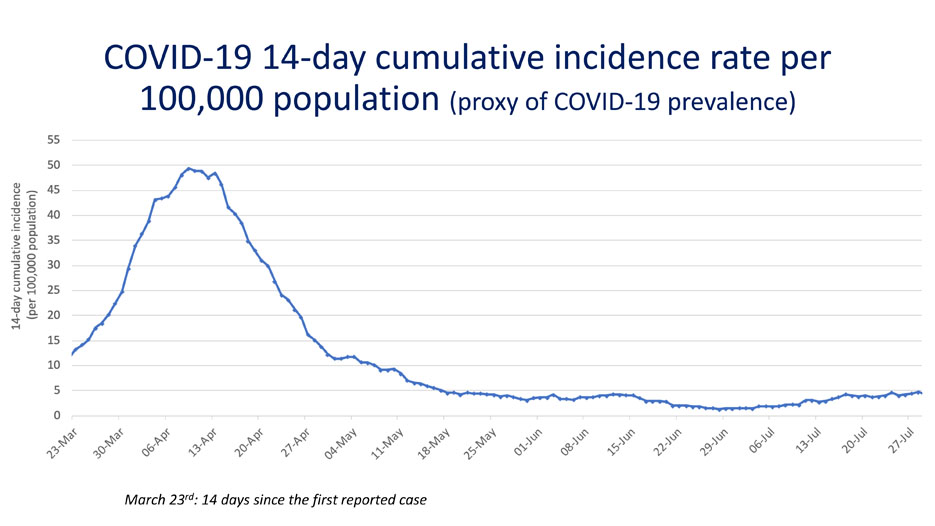 Overall, 32 cases (17.5% of all hospitalised patients) have been admitted to ICU, while currently there are no cases in ICU (as of July 28).

A total of 27 ICU patients (84.4% of all ICU patients) have been intubated, and currently there no patients intubated. The overall median length of stay in ICU (for all 32 ICU cases) was 11 days.

Among ‘live’ cases, 856 (82.3%) have recovered (without symptoms and with two negative  tests  following  their  diagnosis or  released  21  days  after diagnosis).

The median time between the second negative result and the first date of sampling was 25 days (IQR: 19-37days).

Most cases in Nicosia

Other reported symptoms were diarrhoea, runny nose and headache.