Nike is the world’s most valuable apparel firm, according to data presented by FinancePR.com, showing that the American outfit achieved a $30.44 bln valuation in 2021, placing it at the helm of leading garment firms worldwide.

Gucci closed the year with a valuation of about $16 bln. Louis Vuitton and Adidas, on the other hand, posted valuations of about $15 bln and $14 bln.

“That’s because it has a highly differentiated product offering, and consumer switching costs have remained low,” she said commenting on the data. 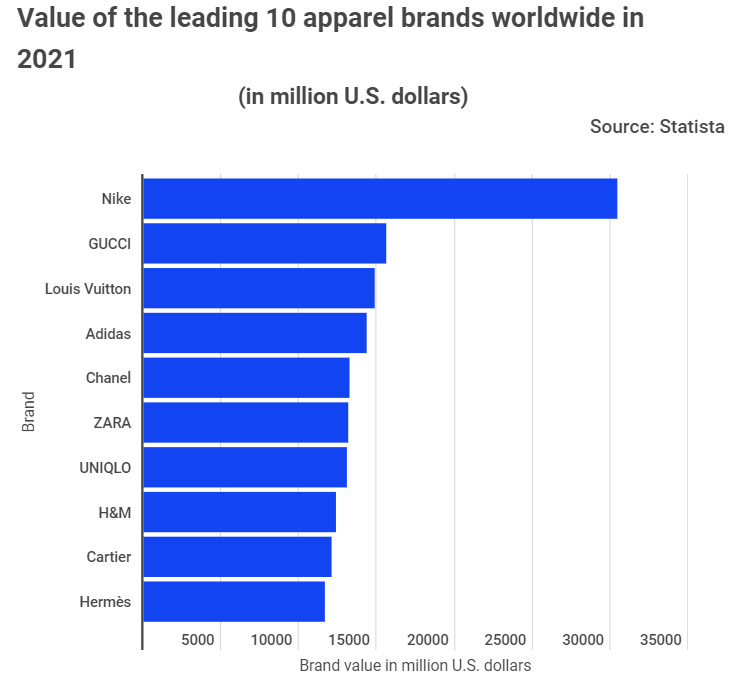 Again, statistics show that its North American business was its most lucrative one. The region added over $17 bln of its 2021 revenues.

Furthermore, the U.S market is its most significant, accounting for about 40% of global earnings.

Nike generates income from three major segments; apparel, footwear, and equipment. Of the three, the footwear segment is its largest and most profitable. It earned the company some $28 bln from sales in 2021.

The Oregon headquartered outfit has a worldwide presence. Its most popular products include Air Jordan, Nike, and Converse.

But it also markets a broad selection of other sports items. Besides its ‘Swoosh’ logo, the brand is visible by the catchy tagline, “Just do it.”

The firm has the endorsement of prominent names in the sporting arena, including LeBron James, Cristiano Ronaldo, and Rafael Nadal. It also sponsors football teams such as FC Barcelona.