Long queues have been forming outside COVID-19 vaccination centres across the island all week, as the pressure on the unvaccinated and people who are in line for a booster shot pays off, with the number of jabs reaching a six-month high.

Health authorities said the highest number of COVID-19 vaccinations was on Thursday, as 12,589 vaccinations were carried out, of which 1,049 involved people who went in for their first shot.

In the past ten days a total of 94,651 vaccinations have been carried out, of which 8,457 were administrated to first timers and another 8,990 for second doses.

The remaining 76,245 involved people turning up for a booster shot.

Health ministry press officer Konstantinos Athanasiou told the Financial Mirror that the authorities were pleased with the turnout.

“It is encouraging that people are turning up for their booster shots, while a number of previously unvaccinated people have come forward. The uptick in vaccinations is important, especially with the arrival of a more transmissible variant (Omicron),” said Athanasiou. 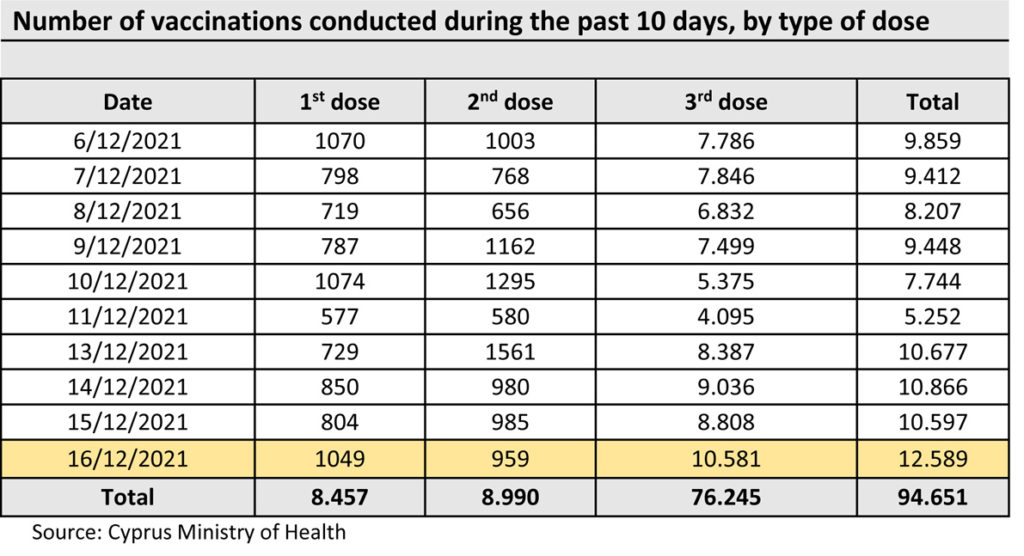 According to the ministry’s latest statistics, 78.6% of the island’s population over the age of 12 has been fully vaccinated, which corresponds to the 68.4% of the overall population.

The overall population rate is expected to be further boosted by vaccinations amongst children aged five to eleven, which got underway on Friday.

Currently, the entire population of over 70s has had at least on dose of a COVID-19 vaccine.

The rate is higher amongst people in their 40s as 95.5% have had at least one shot.

Environmentalists are not ‘buying’ official promises that a local development

The new discussion about what happened in Crans Montana brings

The publication of the proposed new law on common charges