The Met Office has issued another orange alert for extreme weather as Cyprus boils under a blistering heatwave affecting the region as maximum temperatures peak at a year-high of 44 degrees Celsius.

Cyprus is baking under a prolonged heatwave that has scorched the Mediterranean, sparking huge fires in Greece and Turkey while making routine tasks unbearable.

According to Wednesday’s heat warning, maximum temperatures will peak at 44°C inland, 37-39°C on the coast and around 35°C over the Troodos mountains.

Overnight, stifling minimum temperatures will fall to around 26°C inland, 25C° on the coasts and 21°C on higher ground.

The Forestry Department extended a red alert warning for Wednesday, noting the risk for forest fires is high, urging the public to be particularly vigilant. 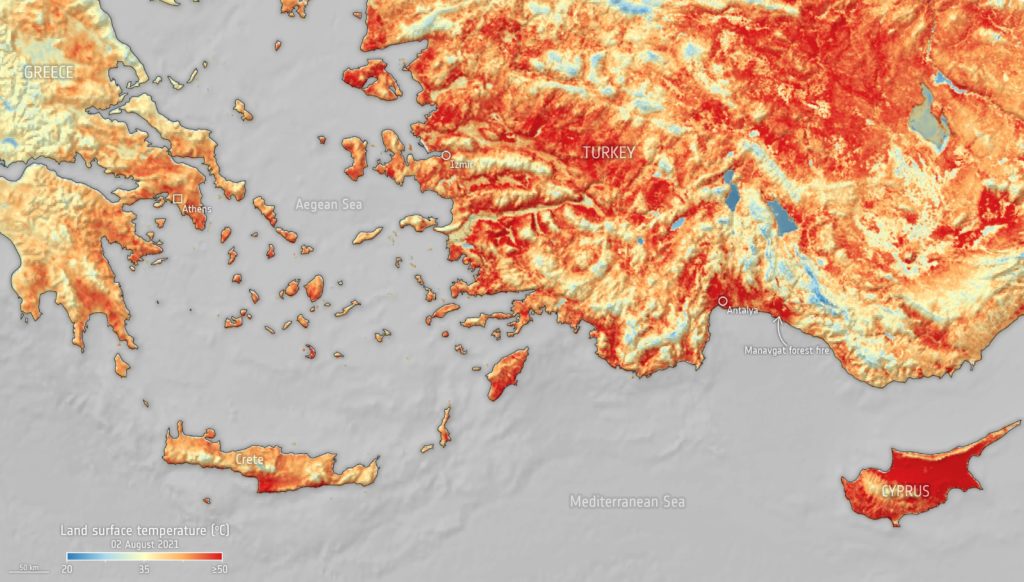 Blistering heat waves in Turkey and Cyprus have seen land surface temperatures exceed 50 degrees Celsius for the second time in a month, the European Space Agency said on Tuesday.

The worst wildfires in decades have scorched swaths of Turkey’s Mediterranean and Aegean coasts for a week, while neighbouring Greece has said a record heatwave there is linked to climate change.

The ESA published a map of the region, including Cyprus, which shows large areas baked a deep red.

“It is clear to see that surface temperatures in Turkey and Cyprus have reached over 50C, again,” the agency said in a statement.

A previous map, generated with data from its Copernicus Sentinel-3 satellite, showed a similar image on July 2. “While weather forecasts use predicted air temperatures, this satellite instrument measures the real amount of energy radiating from Earth — and depicts the real temperature of the land surface,” it said.

Nasa describes them as “how hot the ‘surface’ of the Earth would feel to the touch in a particular location”.

In Turkey, air temperatures above 40°C across the south have set off a record surge in electricity use that caused power outages in Ankara and Istanbul.

Heatwaves have become more likely across the world due to climate change, according to scientists who predict they will become more frequent and intense as global temperatures rise.