Nearly 200,000 Cypriots aged over 18 have yet to get a COVID-19 jab, as health authorities push for a vaccination target of 80% for herd immunity by the end of the summer.

According to data from the Cyprus statistical Services, 199,312 from a total of 735,854 eligible people for a COVID-19 vaccine have yet to come forward.

On 26 July, people vaccinated with at least one dose of vaccine were 72.2% of the eligible population, while 63.5% have completed their vaccination.

Extending coverage among the general population to build the immunity wall, authorities approved vaccinations for underaged children aged 16 and 17 earlier in July.

So far, one in four teenagers has received one jab (25.7%) upon the consent of their parents.

And 63.1% in their 30s have taken a vaccine, with coverage rising rapidly in the older age groups.

Those aged 80 plus has the highest coverage with 95%.

According to Health Ministry data, Larnaca had the lowest take-up rate, with only 66.4% receiving the jab.

The country’s national vaccination plan was further boosted this month with the operation of walk-in vaccination centres.

Between July 15-26, a total of 6,894 people got vaccinated at walk-in centres across the island. 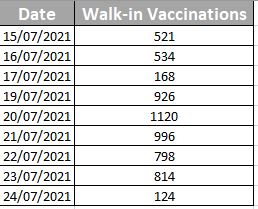 Further announcements are expected regarding the pandemic after the Cabinet meets on Friday.

In comments to CyBC radio on Tuesday, Health Minister Michalis Hadjipantelas, who met with the epidemiological team the previous day, said most experts appeared to agree that authorities should proceed with vaccinating children aged 15 and under who belong in vulnerable groups.

He said opinions varied on the vaccination of all children aged 12 to 15.

Health authorities and experts are concerned over the rising cases amongst the elderly and nursing home residents.

Experts are looking into whether older people who completed their vaccination scheme earlier in the year will need a booster shot.

Hadjipantelas said that Cyprus would be expecting guidelines from the European Union on the matter.

Authorities have offered incentives to get younger people vaccinated, and it will abolish free testing on 1 August.

Only vaccinated people, children under 16, and certain vulnerable groups will be entitled to a free rapid antigen test for COVID-19.

Unvaccinated people will have to acquire a negative COVID-19 test every 72 hours to be eligible for a Safe Pass.

A Safe Pass is needed to gain entry at crowded indoor and outdoor venues, including restaurants, bars, gyms, cafes, and hotels.

It is also required from employees in the private and public sectors.

A Safe Pass is proof of vaccination, a negative test within 72 hours, or recovery from the virus in the past six months.

From next month a rapid test will cost a maximum of €10.

COVID19: Booster rollout for 60 plus

Cyprus reported no coronavirus deaths on Sunday, a rise in

State owned telco Cyta has added another distinction to its

Cyprus is banking on the EU to throw it a

COVID19: Booster rollout for 60 plus

COVID19: Another death as cases dip