Cyprus’ Health Ministry responded to criticism over the government’s coronavirus handling, referring to the high number of rapid tests and its vaccination rollout to those in their 50s.

The ministry said the government had been “unjustly” criticised to “nullify the great effort society has made with sacrifices in the last 13 months”.

It argued that handling the pandemic “is not a matter for the satisfaction of political expediencies”.

The ministry argued that monitoring coronavirus’ spread through mass testing is part of its strategy to exit lockdown measures.

“The increased number of cases seen recently is largely due to people interacting more while the number of tests performed aims at timely detection of cases and immediately tracking their contacts,” the ministry said.

In defending its record, it said Cyprus has one of the lowest COVID-19 mortality rates in the EU, with 0.3 deaths per 100,000 population.

It said the low death rate was down to the hard work of frontline workers and the successful response of the national health system. 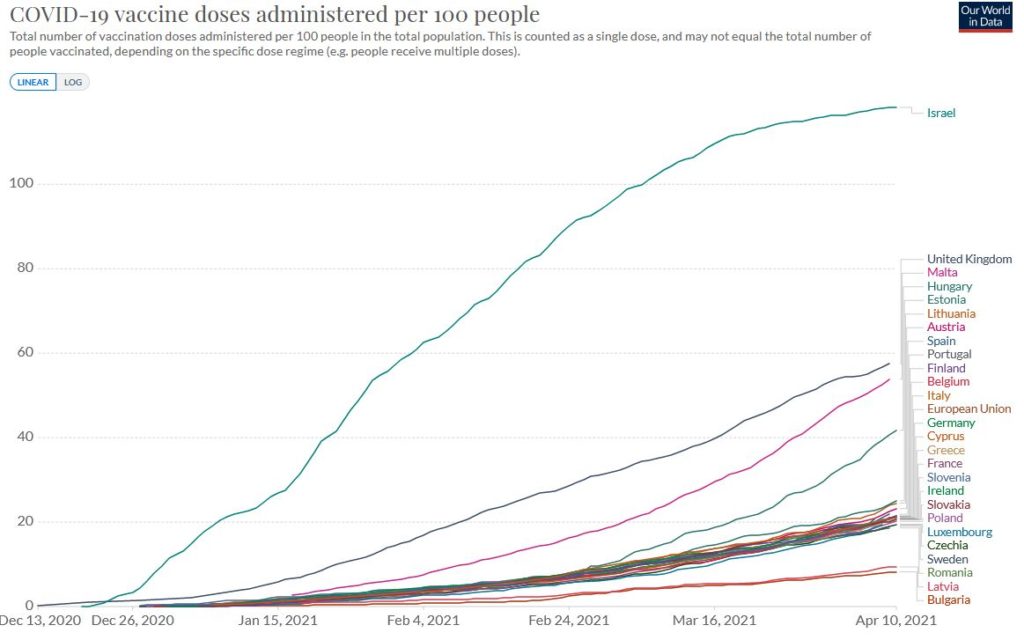 There has been criticism of the government’s slow vaccination rollout and its heavy reliance on the EU’s cumbersome vaccine distribution management.

According to ourworldindata.com, Cyprus has dropped to 13th when it comes to vaccines doses administrated for every 100 people, with 20.92.

Two weeks ago, Cyprus was fourth.

Cyprus is pushing ahead with its vaccination program in a race against time, aiming to cover more than 60% of the population by the end of June, the ministry said.

“Cyprus has met the target set by the EU to vaccinate the elderly with 82% of people aged 80 and above already given at least the first dose.

“A basic aim of the National Vaccination Plan was also to give jabs to members of vulnerable groups, 10,320 of whom have already received their first dose.”

“Cyprus will continue the implementation plan using AstraZeneca, Moderna and Pfizer jabs, while some Janssen vaccines are expected to arrive this week,” the ministry said.

It is also in advanced negotiations to receive the Sputnik V vaccine once the European Medicines Agency approves it.

“The government’s main aim is the protection of public health and ensuring the health of its citizens with the exit from the crisis and a return to normality.”

The Health Ministry also urged people to abide by COVID protocols and regulations.

Reaching for the sky is dangerous in politics

Get to know hidden Cyprus

Cyprus shakes off backlash to be Eurovision contender

Cyprus rarely causes a splash at the Eurovision Song Contest,

The coronavirus-stricken tourism sector has suffered collateral damage from the

Markets gripped by US inflation worries

Cyprus has reviewed its safe travel list, adding Iceland into

Cyprus shakes off backlash to be Eurovision contender

Cyprus has reviewed its safe travel list, adding Iceland into

Scientists advising the government on coronavirus are cautiously optimistic Cyprus