It took a veteran politician with 40 years of public service, nearing the end of his second administration, to realise there’s a problem with corruption in Cyprus.

Perhaps, the President took a page out of the White House manual that the first term is about getting the administration re-elected and the second term looks to leave behind a favourable legacy.

He chose to go head-to-head with corruption, at a time when not just Nicos Anastasiades and his appointees, but the entire political establishment has lost the public trust due to slow reforms.

There is a lack of transparency and public integrity, continuous scandals, and an evident absence of respecting for civil rights.

The island’s most popular satirical cartoonist summed it up best in just a sentence, with what appears to be Anastasiades speaking from a podium: “The measures to combat corruption are the following – I am innocent!” 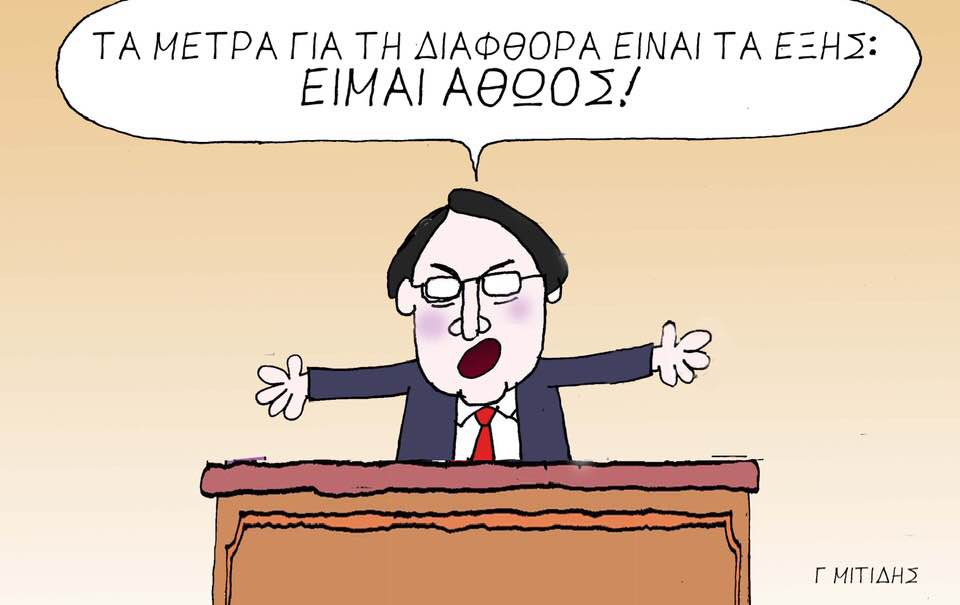 The President’s 23-minute defence on Thursday night was longer than it deserved.

That is justified as he wants the ruling Democratic Rally party to be strong in the upcoming parliamentary election in May.

In what appeared to be an effort to engage in a genuine dialogue with the public, the president’s speech seemed to be addressed to members of the probe into the “golden passports” scandal that has disgraced an entire nation.

He is expected to testify in the middle of next week.

Anastasiades also took the opportunity to take a swipe at his critics, mainly the Opposition and the media, even declaring that nobody had come forward to condemn the ills of the citizenship-for-investment programme.

As expected, Green MP and community activist George Perdikis said these were “lies”.

He said he had been calling for better checks and balances for years while the president’s statement unleashed a barrage of comments on social media, an indication that politicians do not take public opinion too seriously.

President Anastasiades also said he would announce a new framework to combat corruption.

Earlier in the day, Cyprus had just received another blow to its tarnished reputation as it dropped one notch to 42nd in Transparency International 2020 Corruption Perception Index (CPI).

According to the CPI on business leaders perceptions of corruption, Cyprus dropped nine places since 2012, one year before the Anastasiades administration came to power.

However, Friday’s ‘new measures’ were far from convincing, appearing more like a progress report with many issues are either being drafted or still being discussed in parliament.

Issues such as phone tapping and the defence of whistleblowers and witnesses, probing party finances and the fortunes of state officials, free access to public information, as well as the introduction of good corporate governance within the government machine, will all fall under the oversight of an ‘independent authority against corruption’.

The new measures also call for citizens to take responsibility while the e-Justice programme and the establishment of a Judicial College to train judges, should have been near completion.

Civil service reform is of greater concern to the general public while creating a new ‘fraud squad’ within the police when we already have the MOKAS task force, questions the credibility of such declarations.

If MOKAS has been unable to fulfil the state’s need to investigate and prosecute graft and conflict of interest, improving the framework and giving them better tools would be a better idea.

The Justice Minister also said that Cyprus needs to tap into the scientific know-how and the excellent human resource available on the island – a great idea if police reform had come before.

We are still to see the police outsourcing services to experts who would assist with investigations and secure a higher success rate of solving cases.

The grandiose way the ‘new measures’ were announced was unnecessary.

Putting words into action would have been more convincing.

Thinking of changing your GP? Do it now