Cyprus is gearing for mass vaccinations against COVID-19 with the first batch of vaccines expected in early January, officials said Tuesday.

Health Minister Constantinos Ioannou said although Cyprus has not been given an exact date for the first batch, the country “will be receiving its fair share of the vaccines at the same time with the rest of the European Union”.

He called it “a milestone in humanity’s titanic campaign to overcome this unprecedented health crisis”, but stressed the vaccine is by no way the end of the road.

“It is the beginning of the end, rather than the end itself,” said Ioannou.

“The vaccine will give us the opportunity to gradually proceed to the careful lifting of many restrictions, care will still be needed before we can be certain the situation has returned to normal,” said Ioannou.

The Minister argued that the government had acted promptly in taking measures to prevent a second total lockdown.

“We are in a better position and managed to avoid the harsh measures in place since the beginning of November in other European countries.”

Deputy head of the state medical services Olga Kalakouta said the first vaccines will arrive in early January from Pfizer/BioNTech.

An online logistic system will be introduced to monitor the vaccination process.

In total 38 vaccination centres will operate for the administration of the vaccines against COVID-19.

The vaccination centres will operate between 8 am to 6 pm with authorities planning to vaccinate some 350 people a day.

Kalakouta said that vaccinations will take place only by appointments through an online portal, people will receive an SMS with the date and the place they are to be vaccinated. The portal will also remind people when the second dose is needed.

Priority will be given to staff and residents of care homes, people with chronic diseases and healthcare professionals.

Then, authorities will move on to elderly people, vaccinating those aged above 80 and then those over 75. Each group is made up of approximately 33,000 people.

Asked about how elderly people, who may not have computer skills, could book an appointment, Kalakouta said that their appointment could be booked by a relative or a friend.

People over 16, that belong to a vulnerable group are the next in line to get vaccinated. 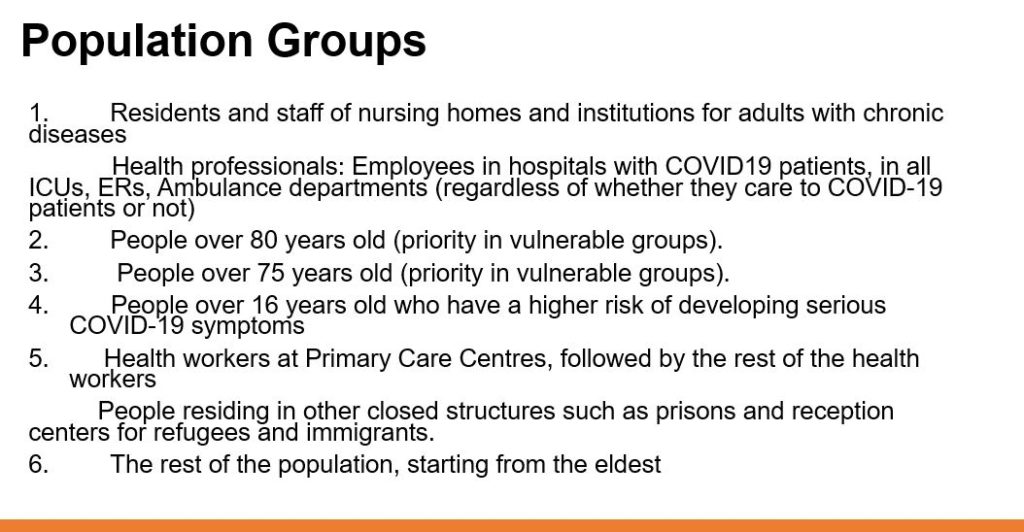 In the coming weeks, Cyprus expects delivery of 168,000 doses, the first 48,000 in early January from Pfizer-BioNTech, then regular deliveries of vaccines every three months.

Health services will be receiving two special refrigerating units on 19 December for storing the vaccines.

Pfizer vaccines need to be stored at minus 75 degrees Celsius, while those of Moderna can be stored at higher temperatures (-25 ֯C) but will still require special storage.

In total, Cyprus has ordered around three million doses from AstraZeneca, Pfizer/BioNTech, Sanofi & Glaxo, Curevac, Moderna, Novavax and Janssen, with each vaccine requiring two shots for immunity (apart from Janssen).

Delivery of vaccine doses is expected until the second quarter of 2022 for AstraZeneca.

Cyprus has struggled under the second wave of coronavirus with the majority of the 82 deaths occurring in November and December.

The virus-hit island has registered 15,450 covid-19 cases since the outbreak in March, it had under 2,000 at the end of September.