Turkish Cypriot authorities have decided to immediately close all crossing points to the occupied north as they step up measures to stem the further spread of the coronavirus.

According to a decision taken by the new ruling coalition in the north, as of Tuesday and until December 25, crossings will be banned, affecting people who live in the north and work in the south.

It will also affect those who do trade under the Green Line Regulation, who will also be prevented from crossing between the two sides for a period of ten days.

The only people exempt from the ban are students and Turkish Cypriots needing to cross to the Republic for medical treatment.

According to the Cyprus News Agency, the new measures also do not affect residents from the Tylliria region who use the Limnitis checkpoint for access to Nicosia.

The Turkish Cypriot authorities have also tightened restrictions within the community in the north as the virus saw a resurgence in December.

They decided to raise the quarantine period for those entering the north from seven to 10 days. People who want to enter the north, along with presenting a negative PCR test certificate of up to 72 hours, must also quarantine for 10 days.

Earlier, the Turkish Cypriots had allowed for visitors to the north for a stay of up to three days, to enter without requiring to quarantine.

Further measures include the closure of all entertainment venues, such as bars and nightclubs from December 15 to 25, while cafes and restaurants can remain open provided they comply with all protocols, including a maximum six people per table.

Turkish Cypriot authorities have also banned New Year’s celebrations at restaurants and hotels between December 15 and January 1 (both dates included). It was also decided that all street celebrations on New Year’s Eve or other occasions will be banned until January 1, 2021.

The measures are to be reviewed on December 24.

Meanwhile, Turkish Cypriots working in the Republic staged a protest at the Ayios Dhometios crossing point on Tuesday morning against the new COVID restrictions. 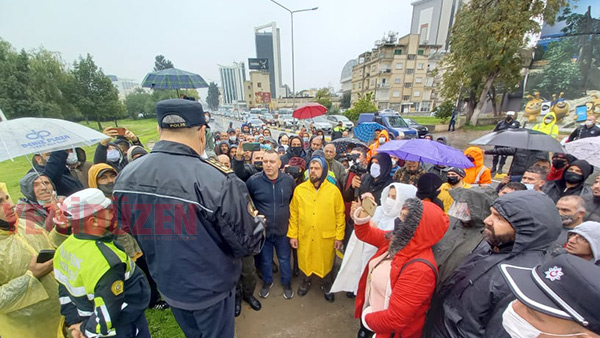 Demanding to know why they were included in a ban on crossings, a group of workers marched in protest to the offices of the ‘prime minister’ and the ‘health minister’.

On the other side of the divide, some 4,885 cases were reported in December by the Republic’s health authorities.

Another 349 cases and four deaths were announced on Monday evening, taking the overall tally since the beginning of the pandemic in March to 15,450 and 82 deaths.