The exercise falls under the Bilateral Defence Cooperation Program between the Republic of Cyprus and Israel.

Manoeuvres involved Israeli combat aircraft F-35s flying over Cyprus for the first time during the exercise with the Republic’s armed forces between 17 -19 November.

The exercise which began Tuesday was coordinated by the Republic’s Military Airforce Command and the Israeli Air Force (IAF).

The purpose of the exercise was to bring personnel up to speed with tactics and developments in the air defence sector, to increase their combat capability, as well as to gain experience from cooperation with the IAF. 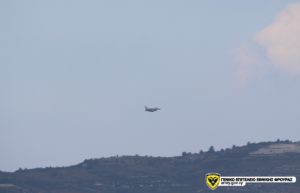 The exercise was conducted within Nicosia FIR with scenarios including fighter jets, air combat exercises, as well as attacks on specific targets at low and high altitudes protected by air defence systems.

It gave the National Guard a “first-class opportunity” to test its anti-aircraft system against the F-35 — one of the best combat aircrafts available.

“Through this cooperation, the participants are given the opportunity to exchange knowledge and experiences to upgrade their professional training and consequently the operational readiness of their units,” the Defence Ministry said.

Israel deployed its F-15, F-16, and F-35 fighter jets to conduct virtual sorties on targets from medium and high altitudes.

Experts advising the government on coronavirus warned that if new