Cyprus’ parliament is expected to pass a unanimous resolution this week in support of the people of Nagorno Karabagh, also known as Artsakh, bombarded daily by Azerbaijan since late September.

The death toll of Armenian servicemen defending Artsakh rose to 223 on Monday with another 18 civilian casualties, as Azerbaijan seeks to retake the enclave, accounting for more than 30,000 deaths on both sides since the movement for autonomy started in 1988.

Although Baku has kept a tight lid on the number of its casualties, independent monitors in the volatile Caucuses region estimate the Azeri death toll to be at least three times higher with heavy losses in military equipment, including Israeli-made drones that is straining diplomatic relations between Armenia and Israel.

Solidarity MP Michalis Georgallas said on Friday the plenary session of Parliament will unanimously vote on a resolution of solidarity and for hostilities to end immediately.

He recalled how difficult it was when he travelled to Artsakh last year accompanied by former MEP Dr Eleni Theocharous and Greens MP George Perdikis, and how the long 9-hour journey and their isolation from the rest of the world was a sign of the determination of the people of Artsakh to continue their struggle.

Theocharous, who heads the Artsakh Friendship Group that includes representatives of all political parties in Cyprus, said, “this is a struggle for freedom, won with rivers of blood.”

Speaking at a press briefing in Nicosia, Dr Theocharous, who as a paediatric surgeon has been on several medical missions to the Armenian enclave during the 1990s, said: “The people of Artsakh continue to defend their freedom and democracy.”

“This is a battle for survival. We are collecting aid and will look into the possibility of treating the wounded, either there or bringing some to Cyprus.”

The veteran field surgeon said she was awoken at 6 am on Monday with news of the city of Stepanakert being bombarded by cluster bombs.

“This is a peaceful city with peaceful people. They are constantly building and developing their economy, which is why they do not have military defences.”

Socialist Edek MP Costis Efstathiou said: “By a gross error of history, a large part of Armenia was gifted in 1923 by the sick Stalinist regime of the former Soviet Union to Azerbaijan.”

“The people there are struggling for freedom and social justice…any proxy war by Turkey will fail.”

Efstathiou was referring to Turkey’s involvement in the fighting, preceded in early August by an attack by Azeri forces on territory within the northern part of Armenia, while the government in Yerevan insists Ankara had also used mercenaries from the Syrian National Army rebels controlling the borderland between Syria and Turkey. 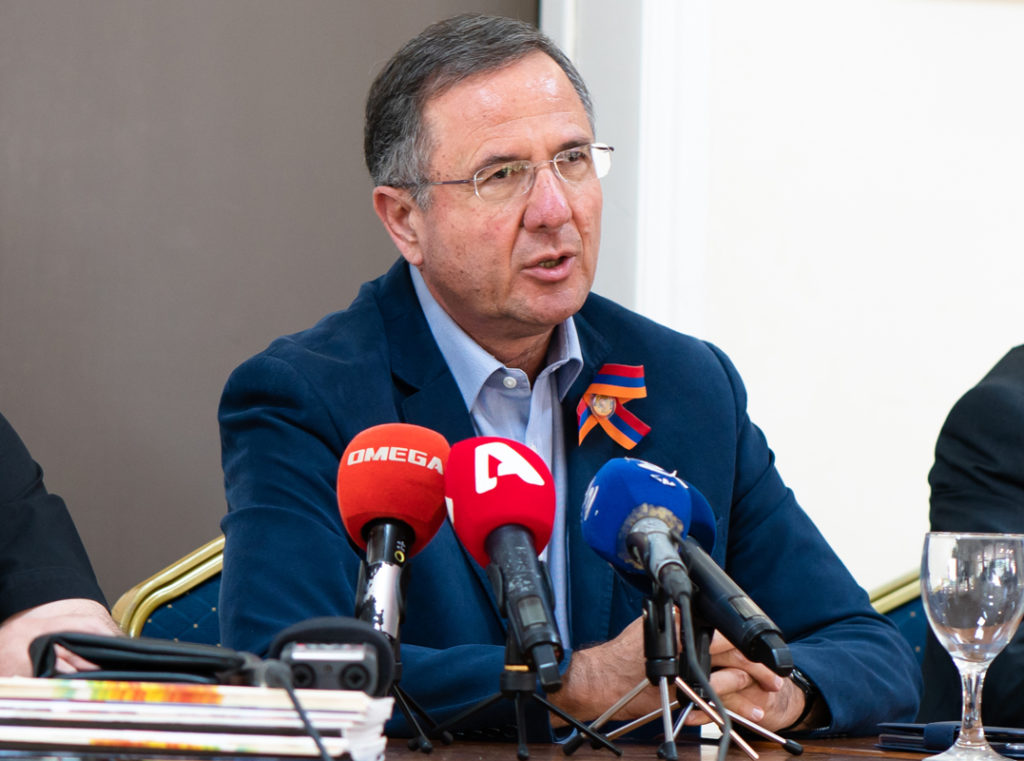 Green MP George Perdikis (photo) said, “We condemn the unprovoked attack by Azerbaijan with the help and planning from Turkey.”

“The people of Artsakh themselves should determine their own future…our dignity as Europe is being jeopardised. This is a great battle for dignity, independence, and freedom.

“I appeal to the Republic of Cyprus to exert greater pressure on France, a member of the Minsk peace initiative in the Caucuses, to move more effectively to end the hostilities.

The Republic of Cyprus has an obligation to act, as the historic Armenian community is a significant part of the Cypriot nation.”

Theocharous, recalling her years in Brussels, where, she said, “It was unfortunate when it was revealed that several MEPs had received backhanders from Azerbaijan to promote Baku’s policies.”

She said that the EU has a commissioner dealing with the Eastern Neighbourhood Policy, a foreign relations instrument of the EU that deals with 16 partner nations that includes Armenia and Azerbaijan.

“The funds allocated to these two countries to promote democratic principles and progress on social issues, so that they can reach EU candidate status, are on the wrong footing.

On the one hand, you have a democracy in Armenia, based on western European fundamentals that underwent regime change with a peaceful velvet revolution in 2018.

On the other hand, you have the bloodthirsty Aliev dictatorship that is inherited from one generation to another and some 95% of the people of Azerbaijan continue to suffer. These people will never see that aid from the EU.”

In a television interview, Cyprus Armenian MP Vartkes Mahdessian said as soon as the aggression by Azerbaijan started, he called Cypriot Foreign Minister Nikos Christodoulides, who issued a statement expressing the government’s full support and solidarity to the people of Artsakh.

They also had a teleconference with the Foreign Minister of Armenia, as well as coordinating initiatives to raise awareness by Cyprus MEP Loucas Fourlas, who heads the EU-Armenian Friendship Group in Brussels.

Several hundred members of the Armenian community of Cyprus staged a peaceful march in Nicosia, handing petitions to the embassies of Russia and the US in Nicosia.

Blame it on Brexit

COVID19: January headed to be deadliest month as cases drop

A wave of feeling across Europe, more infectious than coronavirus,

When economies are struggling to recover from the coronavirus pandemic,

Blame it on Brexit

UK imports to the island halved within the first year

COVID19: January headed to be deadliest month as cases drop