Cyprus is failing its green credentials by staying at the bottom end of Europe for electricity generated from renewable sources, consumption of alternative energy and using RES in transport.

The share of total gross electricity consumption in the EU which is generated from renewable sources is increasing steadily year-by-year but Cyprus is lagging, the latest Eurostat figures indicate.

In 2018, EU electricity from renewable sources provided just under one third (32%) of the electricity consumed, slightly up from 31% in 2017.

Cyprus had one of the worst performance figures with only 9% of electricity generated from RES.

In contrast, less than 10 % of the electricity came from renewable sources in Hungary and Malta (both 8%) and in Cyprus and Luxembourg (both 9%).

Wind and hydropower each contributed around one-third of the total electricity from renewable sources in 2018, with wind power (36%) edging hydropower (33%) as the most important sources.

The remaining third was generated from solar power (12%), solid biofuels (10%) and other renewable sources (9%).

Wind power is the most important

The growth in electricity generated from RES during the period 2008 to 2018 largely reflects an expansion in three renewable energy sources across the EU, principally wind power, but also solar power and solid biofuels (including renewable wastes). 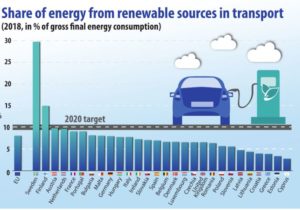 The EU agreed to set a common target of 10 % for the share of renewable energy (including liquid biofuels, hydrogen, biomethane, ‘green’ electricity) used in transport by 2020.

Among the EU Member States, the relative share of renewable energy in transport fuel consumption ranged from highs of 29.7 % in Sweden, 14.9 % in Finland and 9.8 % in Austria down to less than 4.0 % in Cyprus, Croatia, Greece and Estonia. Cyprus was bottom of the pile with a 2.7% share.

In some EU countries, there was a rapid take-up in the use of renewable energy as a transport fuel.

This was particularly true in Ireland, Luxembourg, Malta, the Netherlands, Finland and Sweden.