Three Cypriot teams have reached the European football group stages, with Omonia in a money-making tie with Manchester United in the Europa League.

Manchester United, one of the best-supported clubs in the world, will be coming to Cyprus to face a Cypriot side for the first time.

“What can I say? Facing Manchester United is awesome.

“To play in that stadium (Old Trafford) with players like Ronaldo, De Gea and Rashford.

“Even for me, going up against Ten Haag is something amazing.

“We can gain so much from such teams. And Real Sociedad is a very big team, while for Sheriff Tiraspol, we will try to get information from Bruno who played there,” Omonia manager Neil Lennon said after the draw.

AEK Larnaca also made it to the Europa League group stage, where they face Dinamo Kyiv, Stade Rennes FC and Turkish side Fenerbahce.

The Turkish side was in Cyprus ten years ago when they faced AEL Limassol in the group stage of the same tournament back in 2012.

Omonia Nicosia pulled off a second victory over Belgian side KAA Gent, beating them 2-0. The Nicosia Greens beat the Belgians with the same score last week.

AEK Larnaca won 3-0 at home over Ukrainian Dnipro 1, going through the group stages with a 5-1 aggregate score.

Omonia and AEK were placed in the fourth pot based on their coefficient in European tournaments. 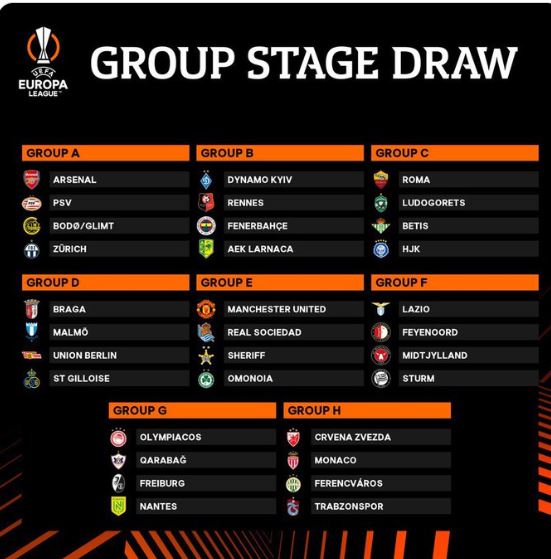 A third team, Apollon Limassol, could not make it past Greek champions Olympiakos Piraeus, despite putting up a strong fight, but continued in the group stage of the Conference League, European football’s third tournament.

They drew 1-1 in Athens after extra time. Cyprus’ champions then lost a penalty shootout 3-1. The game in Nicosia also finished 1-1.

Apollon face Dnipro 1, Dutch side AZ Alkmaar, and Vaduz from Lichtenstein. Vaduz is the first team from the country to make it to the group stages of a European tournament.

Plus, more income flows from TV rights and sponsorship deals.

AEK and Omonia are expected to generate €5 mln each from their campaign in the group stage.

Apollon Limassol will also see serious cash flowing from its participation in the group stage of the Conference League, earning them a minimum of €2.94 mln.

A team winning a group stage fixture in the Conference League gets €500,000, while a draw means contesting teams earn €166,000 each.

Temporary residency made harder for expats

Finance Minister Constantinos Petrides made a bold declaration this week,

UK and other non-EU pensioners eyeing a retirement home in

Despite its small size, Cyprus’s ambition of becoming a fintech

Christmas has come early in the unseasonal surroundings of the