Since Russia moved troops into Ukraine, the letter “Z” — emblazoned on Moscow’s advancing armoured vehicles — has gripped the country’s public consciousness on social media, in manicures and on an athlete’s uniform.

There’s no consensus on what the letter actually signifies, but almost two weeks into Russia’s military incursion into Ukraine, it has become synonymous with the Russian army.

And increasingly, it’s being used as a rallying cry either in support of the operation in Ukraine — or against it.

“Z”, a letter that features in the Latin alphabet but not in Cyrillic, first appeared several weeks ago on military vehicles rolling towards Ukraine, possibly to distinguish them from Ukrainian forces and avoid friendly fire.

But the sign has since become ubiquitous on cars on the streets of Moscow, clothing, and across social media profiles on the Russian internet — a trend the authorities are eager to encourage.

The official Instagram and Telegram pages of Russia’s defence ministry prominently show messages starting with the letter, such as “Za Pobedu” (For Victory), “Za Mir” (For Peace), “Za Pravdu” (For Truth) and “Za Rossiyu” (For Russia).

The government-aligned Kommersant business daily this week published aerial photos of some 60 children and their families forming the shape of the letter in the snowy courtyard of a hospice in Kazan, central Russia.

Several days later, 20-year-old gymnast Ivan Kuliak stepped onto the third-place podium step at the World Cup in Doha, Qatar, wearing a “Z” affixed to his chest — a Ukrainian athlete stood to his right, having snagged gold.

The International Gymnastics Federation responded by calling for an investigation into Kuliak for his “shocking behaviour”.

He, however, told Russian media that, if he could, “I would do it again”.

“I saw our military was wearing it, and I looked at what the symbol represents. As an athlete, I will always fight for victory and I will play for peace,” he said. 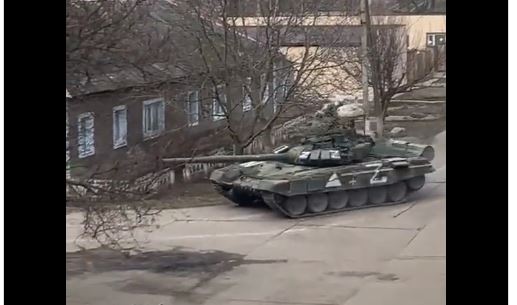 Among theories swirling, one is that “Z” stands for the first letter of the Russian word “Zapad”, which means West, a reference to forces of the Western military district.

Some observers noted it was the first letter in the surname of Ukraine’s leader Volodymyr Zelensky.

Regardless, an array of politicians, celebrities and influencers want to show off their patriotic zeal by splashing the symbol that is emblematic of allegiance to the Kremlin.

Roskomnadzor, Russia’s media regulator, which has recently been working to block media critical of the military operation, accordingly edited its profile on the Telegram messenger to capitalise the “Z” in the agency’s name.

Beyond Moscow and Saint Petersburg, flash mobs and demonstrations of support have sprung up in far-flung regions under the slogan “We do not abandon our own”.

Women have been singing with choir members wearing a “Z” on their chests, taxis have displayed a “Z” on their windows, and cars have parked in the shape of a “Z”.

In the region of Barnaul in southern Siberia, a huge “Z” was on the snow, in the orange and brown colours of the Saint George ribbon, a historical symbol of Russian and Soviet military successes.

Business-savvy minds have seen that T-shirts with the “Z” logo are now being sold online.