Tuesday’s earthquake measuring 6.1 in magnitude was one of the strongest quakes ever recorded in Cyprus, with the Geological Survey Department warning of possible powerful aftershocks.

The powerful earthquake tremor that struck Cyprus at 3.08 am was the second strongest quake in the island’s history.

It is the biggest earthquake to shake the island since a 6.5 on the Richter scale quake struck Paphos in October 1996, when two people died – the strongest in the previous 100 years.

Although Tuesday’s quake rattled the island, no injuries or serious structural damage was reported as the epicentre was in the sea off Cyprus, some 50 km northwest of Polis Chrysochous at a depth of 25 km.

However, experts say a series of aftershocks will carry on for several months.

In comments to the Cyprus News Agency (CNA), the Director of the Cyprus Geological Survey Department, Christodoulos Hadjigeorgiou, said that seismologists can’t exclude the possibility of a powerful aftershock.

Cyprus has not felt such a strong earthquake in over 25 years, but Hadjigeorgiou said that Cyprus is on a secondary Faultline, meaning quakes can happen at any time.

“No earthquake is expected.

“You cannot be sure that there will be an earthquake every 20 years.

“Two of the strongest earthquakes to hit Cyprus took place in 1996 and 1995, on 23 February, which was then the most catastrophic quake recorded.

“But that earthquake was much closer to the shoreline,” added Hadjigeorgiou.

The distance from the coast and the depth of the epicentre of Tuesday’s quake was the reasons why no damage was recorded. 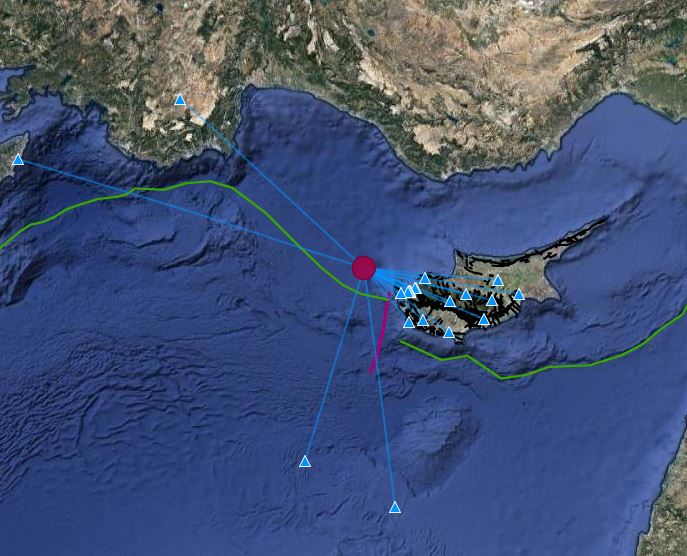 He warned the public should remain vigilant as the earthquake has triggered a series of aftershocks, with the strongest one so far being 3.1 on the Richter scale.

“In 1995, a 5.9 magnitude quake was followed by several aftershocks which measured 5.0 on the Richter scale”.

On 23 February 1995, a devastating earthquake measuring 5.9 shook the district of Paphos, leaving two dead. In addition, some houses collapsed in the villages of Pano Arodes and Miliou.

On 9 October 1996, a very strong earthquake measuring 6.8 occurred in the southwestern part of Cyprus. It caused panic among the residents of Paphos and Limassol and tenants of apartment buildings in Nicosia, Larnaca and Paralimni.

On 11 August 1999, a 5.9 magnitude earthquake with the epicentre close to Gerasa caused damage to buildings in Limassol and the villages north of the town.

Forty people were slightly injured, mainly because of panic. Many aftershocks followed.

Many along the Mediterranean coast of neighbouring Turkey also felt the quake.

In some districts of Turkey’s southern Antalya province, people rushed out of their beds into the streets after they felt the shaking.

Cyprus lies in an active seismic zone where it’s estimated that 15% of the world’s earthquakes occur.

MPs have dived into the thorny issue of euthanasia, launching

A Nicosia district court rejected a petition by 64 people

The government is trying to find ways to absorb a