Over the last weeks natural gas prices in continental Europe and in the UK have soared to unprecedented levels because of tight supplies ahead of the winter season, as many underground storage facilities across Europe were not replenished during summer.

This has raised fears of supply shortages over the coming months and dire economic consequences for industry.

Surging gas prices have also resulted in much higher electricity prices, forcing many European governments to discuss billions of euros in aid for households and suppliers in order to meet the present market anomaly.

The huge rise in fuel and power prices means additional costs to be incurred by consumers are likely to reach 100 billion euros ($117 billion) in the 2021-22 winter period in EU member states, according to EU sources.

Swept by the latest wave of European energy price rises and a growing reliance on imported natural gas, Greek consumers are facing much higher electricity bills even before the start of the winter season.

As the country is trying to shed lignite-powered plants (an indigenous form of thermal coal) which until recently was the mainstay power generation, in an effort to decarbonise the energy system and introduce large scale renewables, it has come to rely more and more on natural gas and electricity imports from neighbouring countries which are needed to meet base load requirements. 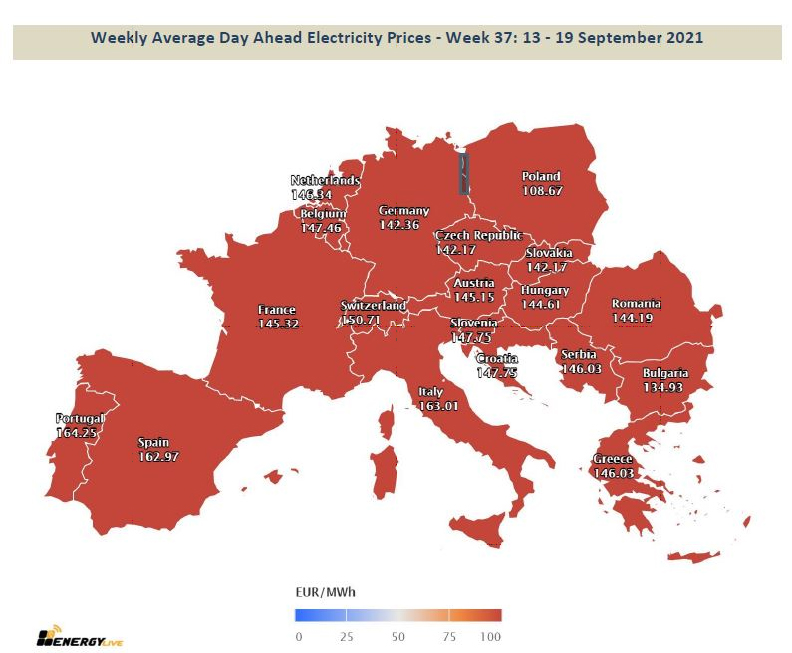 “Base load is absolutely necessary as the electricity produced by renewables is intermittent and one cannot rely on it to produce let alone maintain steady and reliable 24 hour electricity supplies to the network”, observed a senior official from one of the country’s major independent power suppliers.

Although some of the daily electricity deficit can be met by hydroelectric dams (with Greece having some 3.0 GW of hydro capacity) which act as giant electricity storage mechanisms, these are not enough to handle the bulk of the power generation load. In this sense, as the amount of electricity produced by renewables is gradually growing there is a need for more gas and electricity imports to maintain the system in full operation.

At mercy of European prices

As seen in the map below, there appears to be a large degree of uniformity and interconnectivity. In this context, the countries which can produce electricity with local energy resources such as renewables, gas or cheap coal have an advantage and this is usually reflected in local price formation.

To that, one has to add the penalties paid by European power producers through the high carbon costs they have to face through the EMS mechanism with CO2 prices hitting the roof over the last weeks.

Prices reached record highs just above €70 per ton, compared to €20-€25 per ton which were just two years ago. Such high carbon emission costs make production from local lignite just unsustainable. 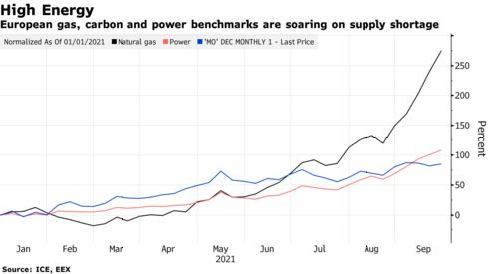 As the incumbent Public Power Corporation has no choice and on certain occasions has to resort to power generation from lignite in order to maintain adequate supplies, prices increase further and so Greece ends up having some of the highest wholesale prices in Europe.

Facing a perfect storm in electricity prices with certain suppliers already passing on wholesale price increases to the consumer, the Greek government has intervened in order to provide subsidies in a desperate effort to minimise price hikes which will appear in the October electricity bills.

Since the start of September, the minister responsible for energy, Costas Skrekas, has made a series of announcements promising hefty subsidies to household consumers in an effort to appease consumer anger and anxiety among the independent power suppliers, which together with PPC, are asked to saddle the burden of price increases by eroding or even zeroing their profit margins.

This has caused deep consternation among the country’s 15 or so electricity retail suppliers who are levelling criticism at the Mitsotakis government for unfair treatment.

Initially, the plan was to subsidise PPC to the tune of €150 mln to maintain prices low and hence force the independents to follow suit but at their own expense. Now, this figure has increased to €200 mln to be proportionally disbursed to all suppliers, and is likely to rise further since according to analysts, inflated electricity prices are likely to persist until next spring.

Proposed subsidies in the Greek market are planned to curtail electricity tariff increases by €2-3 per month for low voltage consumers in the €30 / MWh category.

However, independent supplier sources told the Financial Mirror that the government should be prepared to budget at least €5 – 6 bln over the next six months in order to maintain consumer prices low.

“This is clearly a financially unsustainable situation and more over it distorts for good market competition”, a senior executive from a major electricity supplier told us.

“Instead, the government should strive to find a solution through the EU to lower unacceptably high emission charges and thus enable conventional energy sources to operate and fuel power generation. The fantasy of aspiring for renewables to completely substitute coal and gas should end right now if we are to guarantee uninterruptible and affordable power generation,” he added. 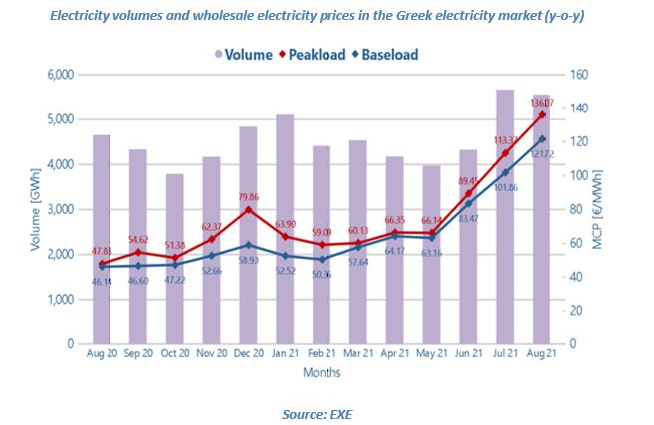 Earlier in the week, during an EU ministerial meeting, the Greek government suggested creating a European Union-funded mechanism that could use revenue from extra sales of carbon permits to limit the impact of soaring energy costs on consumers and companies.

To help nations shoulder soaring energy costs, the Transitional Hedging Fund would raise money from sales of carbon emission permits in the EU Emissions Trading System, possibly through additional auctions or “an advance payment of expected future EU ETS revenues,” according to Greece’s proposal. The EU could then auction allowances that would normally be sold in the coming years.

“This way, companies will be able to buy up enough carbon credits to fully hedge their exposure to the carbon price,” while “a rough estimate of the amount needed for winter 2021-2022 is around 5-8 billion euros”, according to Greek government sources.

Carbon prices more than doubled over the past two years, surging to a record earlier this month as the EU tightens its climate policy, a contributing factor in the surge in natural gas and power prices.

The new mechanism would require amendments to the EU regulation on carbon auctions, a procedure that needs support from national governments and a nod from the European Parliament.

The revision would need to ensure that the fund could be used only in times of exceptional price volatility, Greece said.

It should also include claw-back provisions ensuring recovery of the fund based on a longer-term, smoothly-applied consumer levy.