The last two months have been pretty dynamic for the crypto market. First, Elon Musk’s Bitcoin tweets and a new round of regulations by the Chinese government caused the unexpected pullback in Bitcoin and other cryptocurrencies in May.

A month later, cryptocurrencies plummeted again after the US Department of Justice seized $2.3 mln in crypto coins paid to the ransomware extortionists Darkside.

Despite that, some of the world’s largest crypto coins have significantly increased their value since the beginning of the year.

According to data presented by BlockArabia.com, Dogecoin witnessed a four-digit price growth between January and July, the biggest increase among the top ten cryptocurrencies.

Dogecoin’s popularity has exploded since the beginning of 2021.

In January, the price of the original meme coin amounted to $0.009. A month later, after Tesla CEO Musk and rapper Snoop Dogg sent out a flurry of tweets about the coin, its price jumped to $0.08 and continued rising.

In May, it hit an all-time high of $0.70. Although this figure slipped to $0.20 last week, it still represents a massive 2,100% increase since the beginning of the year.

Due to its recent surge in price, the original meme coin ranked as the eighth-largest crypto coin by market cap and the fifth most-traded cryptocurrency in June.

Compared to the leading cryptocurrencies, Binance Coin has a significantly lower price.

However, the world’s fourth-largest digital coin with a market cap of $50.7 bln follows Dogecoin when it comes to price growth. Statistics show Binance Coin’s price jumped by 727% over the last seven months, reaching $317.6 last week.

After an outstanding performance throughout the last year, the price of the world’s second-largest cryptocurrency, Ethereum, exploded in 2021. Between January and March, it soared by nearly 150% to over $1,800 and continued rising. 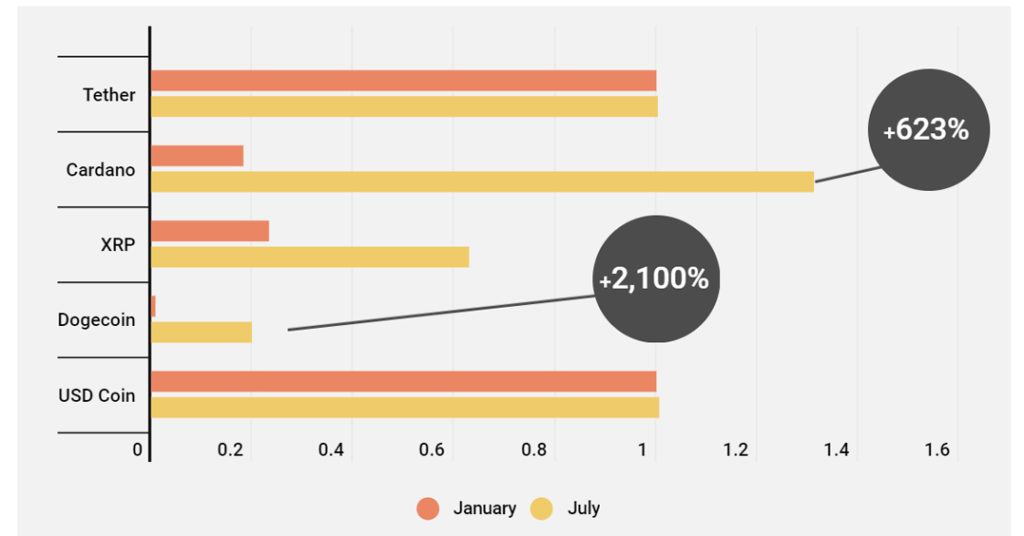 Statistics show the world’s biggest digital currency, Bitcoin, witnessed the smallest price increase since the beginning of the year. Bitcoin’s price rallied over 100% in five months, helping its market cap hit $1.1 trln at the beginning of May.

However, by the end of the month, the flagship cryptocurrency fell to more than three-month lows, dropping to about $30,000 at one point.

The unexpected pullback in Bitcoin and other cryptocurrencies came as a flurry of negative headlines and catalysts, from Tesla’s Elon Musk to a new round of regulations by the Chinese government. Statistics show that Bitcoin’s price stood at around $33,231 last week, a 14% increase YTD.

A series of mistakes led to the freak accident that

Turkish Cypriots are seeing their earnings vanish due to inflation

COVID19: Wider face mask use back on the table

Scientists advising the government on handling the coronavirus pandemic are