Among the election victors, marked by a record-low turnout, were far-right ELAM and a centrist splinter group Democratic Front (DIPA), as voters searched for alternatives to the three traditional parties, DISY, AKEL and DIKO.

Despite a series of scandals ranging from ‘golden passports’ handed out to dubious investors to party members forging their academic qualifications for a commissioner’s seat, DISY held its ground as it emerged top with 27.77% of the vote.

AKEL had one of its worst showings in recent history, with 22.3% of the vote.

“The result isn’t what we expected,” AKEL General-Secretary Andros Kyprianou told a party rally. “We respect it, and we’ll examine it carefully to draw conclusions, but we can say we failed to convince (our supporters).”

Kyprianou said, “everything was on the table” when asked by journalists if a change in leadership was on the cards.

ELAM, an anti-migrant nationalist party that boasted links to Greece’s Golden Dawn, outlawed by a Greek court last year, almost doubled its showing compared to the 2016 poll to about 6.8% of the vote, making it the fourth-biggest party.

ELAM edged out the socialists EDEK party by the razor-thin margin of 200 votes.

The centrist Democratic Front, created by centre-right DIKO defectors, gained 6.1% of the vote to enter parliament.

Talking to CyBC, political analyst Christoforos Christoforou said the results indicate a “very big failure” on both DISY and AKEL to rally more supporters by convincing them of the benefits of their policies.

A last-ditch appeal by the DISY leadership limited a projected 5% voter loss to 3%.

Christoforou argued that the government campaign promoting its achievements and recent €4.4 bln funding violated the Organization for Security and Co-operation in Europe (OSCE) regulations on impartiality.

He said the real winners were ELAM with its hardline nationalist policies and DIPA, whose top echelons still have connections to the centres of political power as former ministers and lawmakers.

He said the high electoral threshold of 3.6% means that 15,000 voters who cast ballots for smaller parties are left without a voice in parliament.

Meanwhile, the number of women MPs dropped from eleven to eight, or from 19.6% to just 14% compared to the previous elections.

Seven parties were elected, compared to eight in the 2016 elections, with Citizens Alliance and the Solidarity Movement being replaced by the Democratic Front. 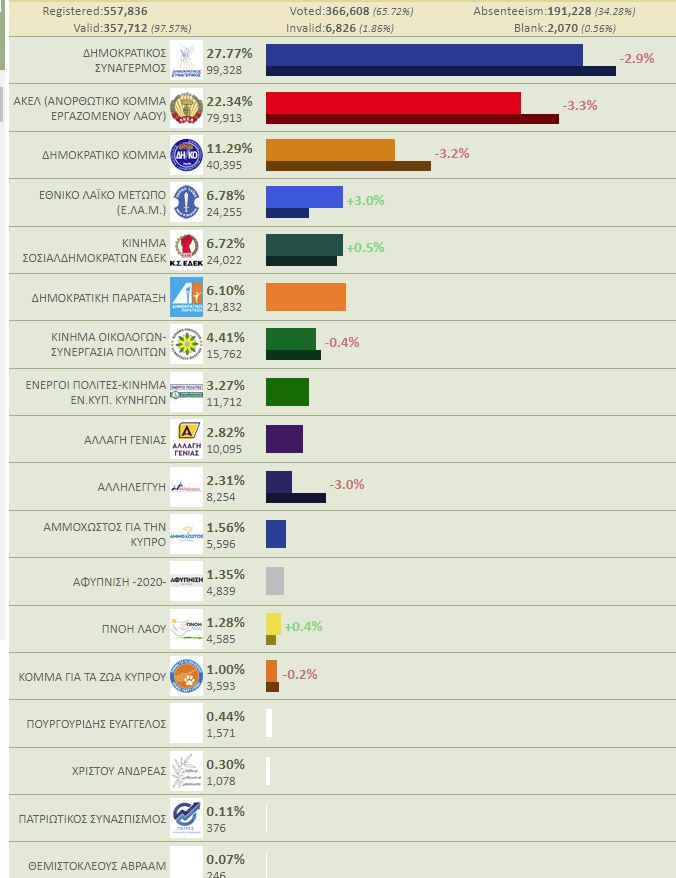