A decision by the Cyprus Church to demolish four listed buildings surrounding the site of a new cathedral under construction in Nicosia caused a public outcry with demands for Archbishop Chrysostomos II to face charges.

Nicosia Mayor Constantinos Yiorkadjis told state radio CyBC on Tuesday the church-sanctioned demolition of four listed buildings in old Nicosia was illegal and the municipality is demanding they be restored.

Some of the buildings, according to available data, were built in 1927, some of their structure is still standing after the bulldozers went in.

The buildings on Isokratous Street were located on land owned by the Archbishopric, near where the construction of a cathedral is currently underway.

Yiorkadjis said Monday’s demolition took place without any prior permit issued by the municipality.

“We are especially saddened whenever a part of our cultural heritage is lost.

He added the chief engineer of the municipality has sent a letter to the Archbishopric stating that the demolition of the listed buildings was done arbitrarily and illegally and as the owners should restore any damage caused.

“The letter also points out that this action violates the conditions under which the permits for the construction of the Cathedral were issued,” said the Mayor.

The Technical Chamber of Cyprus (ETEK), in an announcement on the matter, said the not only did the Church not have the appropriate licenses, but it had also violated terms of planning permission for the cathedral.

According to the contract, the Archbishopric has an obligation to maintain and restore the surrounding buildings.

Both ETEK and Nicosia’s mayor argued the building permit for the Saint Barnabas Cathedral can be revoked. 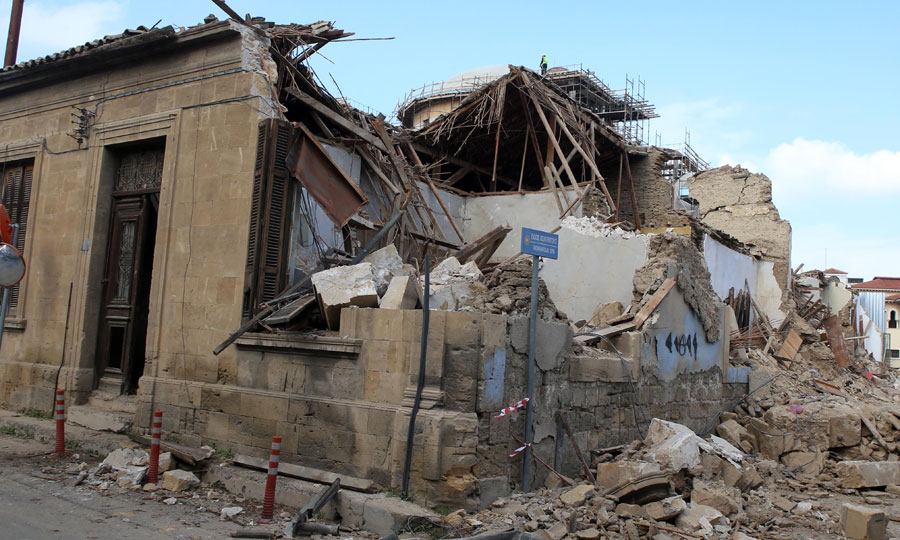 The demolition has enraged political parties, with ruling DISY on Tuesday issuing a response calling for the competent authorities to step in and “do everything that the laws of our state provide”.

Main opposition AKEL in a critical statement on Tuesday said: “Our cultural heritage is not the property of the Archbishop”.

It further called the Church’s actions “yet another crime bearing the seal of the Archbishop”.

“The demolition of listed buildings is the latest cultural crime committed by the Archbishop. Previously we had the declassification of an ancient monument in Yeroskipou by the Cabinet to facilitate the Archbishopric to build a luxury hotel.”

AKEL argued that “the arbitrariness of the Archbishop is fueled by Anastasiadis-DISY government, which covered for any illegalities by willingly fulfilling all his demands”.

The Interior Ministry said the demolition violated laws to protect cultural heritage, it urged Nicosia Municipality to demand that the Church restores the damaged buildings.

In a joint announcement with the Town-planning Department, the ministry said that following an investigation of the site, it is “deeply troubled and concerned over the arbitrary and illegal demolition of the Preserved Buildings, owned by the Archbishopric”.

“The protection of architectural, but also historical heritage, is a priority for the state, which is expressed through the relevant legislation and government policy for the preservation of cultural heritage,” said the Ministry.

It further noted that some 7,000 buildings have been listed across the island in an attempt to preserve Cyprus’ cultural legacy for generations to come.

Losing our faith under the rubble

It didn’t take long for another COVID variant to mutate

The tumbling Turkish Lira is taking the Turkish Cypriot economy

Justice Minister Stephie Drakou was in parliament this week, where