Cyprus is among the top 10 EU member states to vaccinate against COVID-19 with 0.69% of its 900,000-population inoculated since 27 December.

According to Our World in Data, an organisation formed by the collaborative efforts between researchers at the University of Oxford in the UK, Cyprus is currently ranked 8 among the 27 EU member states. 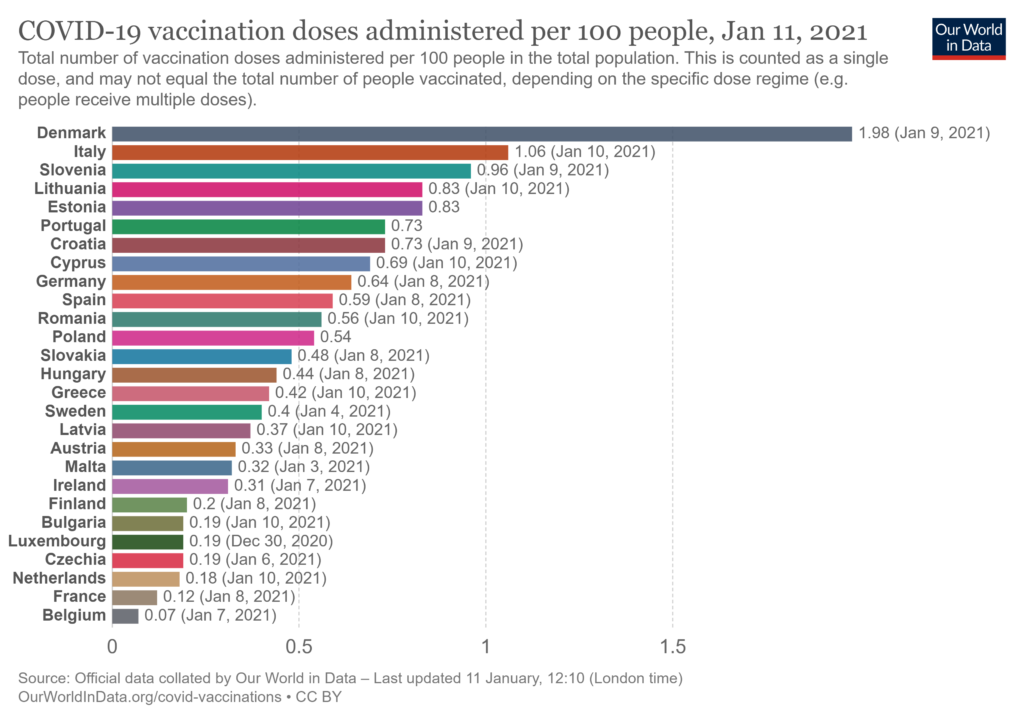 The news was delivered by the Ministry of Health on Tuesday, in which it also laid out its vaccination strategy.

“The Ministry has focused on the immediate distribution of doses received on a weekly basis for vaccination of its citizens, separated into groups according to their risk of developing serious symptoms of COVID-19,” a statement said.

Health authorities categorise people based on the recommendations of the European Centre for Disease Control and Prevention (ECDC).

“Contrary to the practice in other countries of the bloc, the method of administering the available vaccines immediately upon arrival allows for faster coverage of the population groups with increased risk, also helping to reduce the number of patients and decongest the Health System,” said the Health Ministry.

The first batch of 1,200 doses is to arrive on Tuesday night with Cyprus expecting to receive the same number of doses on a weekly basis.

The island’s inoculation program is to be further boosted once AstraZeneca’s vaccine gets approved by the EMA which is expected to deliver its recommendation to the EU on 29 January.

Cyprus is in stage two of its vaccination plan, inoculating the over 80s, after covering more than 80% of elderly people living in nursing homes and frontline health workers.

Nearly 4,000 vaccination appointments for next were quickly exhausted on Monday within hours of becoming available online, the Health Ministry said.

“The great interest exhibited by citizens in getting vaccinated, proves their determination to shield their own health while protecting Public Health, which will consequently bring an end to the health crisis,” said the Health Ministry.

Silver expected to gain in 2021

What the President said or did he ever say it

Cypriot workers are worse off than they were 10 years

Enhancing relations with Gulf states which have significant military capabilities

Coldest day in Cyprus this winter