The future of East Med gas markets will be decided in the next couple of months, based on the outcome of the EU-Turkey discussions and the ongoing integration of the EMGF countries.

Hit by the effects of the COVID-19 global economic crisis, a historical oil and gas demand destruction and unsettled 2021-2022 financial situation, East Med states should be assessing their options.

Internal market dynamics are pointing to possible increased demand for natural gas in the region, but political-military tension in the area is constraining these promising options.

Global gas and LNG prices are also not real support at present, as the costs of offshore gas projects in Cyprus, Greece and Israel are still high.

Chevron’s acquisition of several East Med concessions in Israel, should not be a future driver, as the parent company is still hit by global low oil and gas prices, decreased revenues and growing pressure on its CAPEX/OPEX.

Offshore gas, especially considering high costs, fledgeling local and global demand, and LNG glut worldwide is not a basis to build on.

At the same time, Turkish aggression to its perceived rights to drill in the Mediterranean is also not taken lightly by investors, operators or governments.

The call for a Green Deal in the EU, fully supported by the Brussels Administration and European financial institutions (EBRD, EIB), is a threat to East Med gas future.

Global LNG deals by EMGF members are also not going to be an easy path to walk.

A drastic change in LNG or natural gas future in the region is also needed, not only looking at options for gas as a fuel but additionally on the utilization of gas as feedstock for petrochemical products.

The need for additional revenue streams generated by natural gas is still largely underdeveloped in the region.

As Symeon Kassianides, chairman of DEFA, stated, the “import and usage of natural gas has an immense potential for Cyprus and can change the island’s economy”.

All agree that using LNG and offshore natural gas for power generation is a green deal, to be promoted without delays.

The whole region should set up a full-scale gas economy, not only for power generation, which will be substituting other more carbon-intensive fuels, but also gas-feedstock based petrochemicals and the ongoing global fuel transformation in shipping.

By setting up regional networks for bunker-fuels LNG and natural gas can be a major attraction for global shipping. 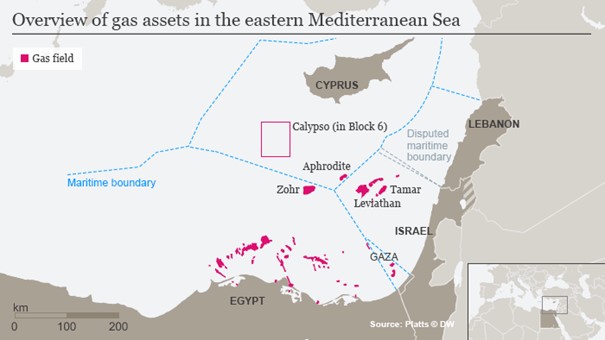 Cyprus is planning to set this up, while Egypt, supported by companies such as TAQA Arabia, is already putting in place bunker projects.

LNG bunker fuels in the East Med, the main crossroad of maritime traffic between NW-Europe-Black Sea and Asia/GCC, is a viable and financially attractive option, generating revenues and advantages to the East Med regional ports too.

Italian energy giant ENI has stepped up its efforts to support an increase in Egyptian LNG market share again.

The oil major has signed series of agreements with the Egyptian General Petroleum Corporation (EGPC), the Egyptian Natural Gas Holding Company (EGAS) and the Spanish company Naturgy, to restart the Damietta LNG liquefaction plant in Egypt by the first quarter of 2021.

It will increase not only the overall capacity of LNG liquefaction for the region but also be possible support for bunkering and energy transition projects on and offshore in the region.

Eni said the plant has a capacity of 7.56 billion cubic meters per year but has been idle since November 2012.

Increased LNG liquefaction capacity is already needed to support the Zohr and Nooros offshore gas fields in Egypt but will also be available for third party suppliers.

Even in the current rather dull and grey winter scenarios for natural gas, there are sparks of hope and potentially still untravelled paths to make East Med a success story.

As some analysts have already stated for months, East Med gas should be seen as a potential regional economic integration instrument, proposing regional growth models, and investing in diversification of the economy.

Current natural gas reserves in the East Med are not only a potential cause of conflict but should be a full-scale regional stability factor too.

Some green shoots are already on the regional olive trees, as Israel and Lebanon are in official bilateral discussions on the delineation of their maritime borders.

A major step forward, as both countries, are officially still at war, but showing the capability to push all aside to make the first move.

For the East Med Turkey is a key factor, not only as a destabilizing military power player but also if regional cooperation really could be successful, the largest and closest natural gas market.

Without doubt, an integration of Turkish gas markets in the list of proposed clients for EMGF gas exports would be a positive development.

Costs of transportation or the construction of offshore deepwater gas pipelines would be minimal or not even necessary.

Turkish President Erdogan is on a collision course but seems to be looking for some options to defuse part of the tension at present.

The threat of EU sanctions is hanging over the Turkish economy like the sword of Damocles.

This week Erdogan said that he is open for negotiations on gas exploration rights for Turkey in the eastern Mediterranean.

The statement was made under the dark cloud of EU leaders discussing harsh sanctions, mainly due to Ankara’s aggressive offshore manoeuvres lately.

If Erdogan is taken at his word, some room is there to decrease tensions in the region, currently hovering around military action from all sides.

In a video message to a university forum, Erdogan reiterated that “we can solve the problems of the eastern Mediterranean by not excluding each other but by bringing all the actors together around the same table”.

Ankara however also stated that Turkey would “not accept plans and maps that aim to confine us to the shores of Antalya”, referring to a growing list of maritime boundary claims.

EU leaders will need to show their commitment or power-political standpoints.

Another showdown with Turkey cannot end again with delays in decision-making or outright capitulation.

Any straightforward results will and can kickstart necessary offshore gas developments and EMGF integration efforts.

The main fear, however, is that European, Arab, and Turkish politicians are good at putting oil on the fire, but never quick to find potential and viable solutions to the advantage of the majority.

If the EU Summit this week, however, is a rehearsal of former meetings, Turkey and Erdogan will not be encouraged to change course.

Research has shown already that Erdogan’s 2021 strategies in the region will depend on the outcome of the EU Summit.

No result or vague statements are going to hit EMGF parties hard while Erdogan will be able to go ahead on his pro-active destabilizing course in the region.

Investments (EMGF and Turkey) will be hit as no investor puts billions in unknown fragile projects anymore.

The writer is Global Head of Strategy & Risk at Berry Commodities