Hundreds of Turkish Cypriots took to the streets to demonstrate against Turkey’s interference in the north, days before President Recep Tayyip Erdogan is to visit Varosha for a ‘picnic’.

Tuesday night revived memories of the large demonstrations in 2003 in support of a UN reunification plan for Cyprus.

Back in 2003 some 70,000 Turkish Cypriots – one-third of their number on the island – had demonstrated in northern Nicosia, packing Inonu square urging then Turkish Cypriot leader Rauf Denktash to resign or accept a UN peace plan.

Police said there were around 3,000 at Tuesday’s protest in Inonu square but organisers claim there was 10,000 present.

The demonstration was called by the newly formed party Democracy and Political Will, with former Turkish Cypriot leader Mustafa Akinci, the Turkish Cypriot north Nicosia Mayor Mehmet Harmanci at the forefront of the protest.

The son of the late Turkish Cypriot leader Rauf Denktash and former leader of the Democratic Party in the north, Serdar Denktash had also said on social media that he would be attending the rally.

Demonstrators chanted slogans such as “Ankara get your hands off our backs”, “No obedience, but freedom”, “Democracy for everyone”, and “Cyprus will remain secular”.

Although, not the numbers which took to the streets in 2003, this protest proved that Turkish Cypriot society is deeply divided following the victory of hardliner Ersin Tatar as the new Turkish Cypriot leader last month. 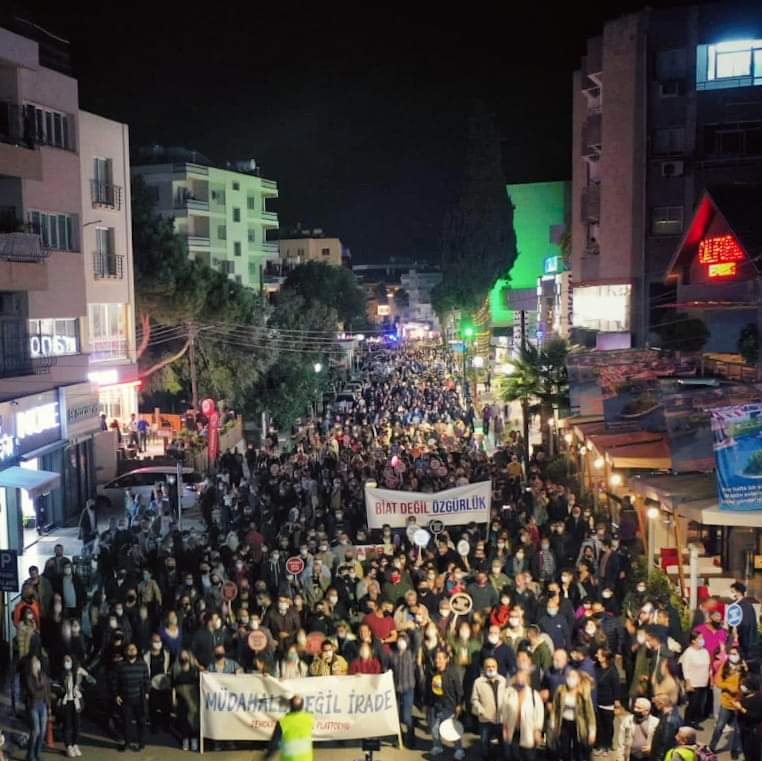 Tatar having won the election reaffirmed his stance that Cyprus negotiations should not aim for a bi-zonal bi-communal federal system – as provided in high-level agreements and UN resolutions, but look for other forms of a solution.

Openly a supporter of a two-state solution, Tatar has had Ankara’s backing from the outset of his election campaign, pulling off a couple of last-minute stunts to boost his candidacy, including the opening of fenced-off Varosha.

Demonstrators took on Tatar’s and Erdogan’s plans, as they carried banners against their move to open the fenced-off resort of Varosha, such as “Varosha belongs to all Cypriots”.

Erdogan is planning to visit Varosha where he is to have a picnic with Tatar on Sunday.

In earlier comments to the Financial Mirror following Tatar’s victory, Professor of Political Science Ahmet Sozen said analysts should not be quick to jump to conclusions that the idea of reunifying Cyprus under a federal-state has been rejected by the Turkish Cypriot community.

“Recent studies have shown that there is not a clear majority against a federal solution, but there is a lot of frustration in the community after the failure of the Anan Plan in 2004 and the crash at Crans-Montana (2017).

The two-state solution is the number one preference the same way the preference of Greek Cypriots is a unitary state.”

Sozen argued the Turkish Cypriot community is split between those who support a UN federal solution and those who do not.

The 48% obtained by Akinci and the pro-solution camp is a solid foundation.

The camp that had backed Akinci, was also the camp that wants to see an end to Turkey’s meddling in the north.

Mustafa Akinci was targeted by Erdogan as he was seen as a big obstacle to Ankara, but he also criticised Turkey’s interventions in the broader region, namely in Syria and Libya.

Tatar, Akinci in second round of northern Cyprus elections