Leading employers believe the controversial Cyprus passport for investment scheme should be maintained, improved and its resources redirected from property deals to funding industry as well.

George Petrou, chairman of the Employers’ and Industrialists Federation (OEB), said Thursday the ‘Citizenship by Investment Scheme’, has contributed up to €9.7 bln in direct and indirect contributions and created about 10,000 jobs since 2013.

The so-called ‘golden passport’ scheme has come under fire from international media and the EU after Cyprus granted passports to financial fugitives.

Qatar-based Al Jazeera recently ran a series of reports identifying people wanted in Russia, eastern Europe, the Middle East and Asia as having bought Cypriot passports through the CIS scheme, often providing misleading and false information about their home convictions.

Cyprus was not stringent enough in its vetting process and after heavy criticism at home and abroad, said it was revising the CIS programme.

It appointed a technocratic committee to probe the process for citizenship and earlier this week, the government said it was rescinding seven passports. 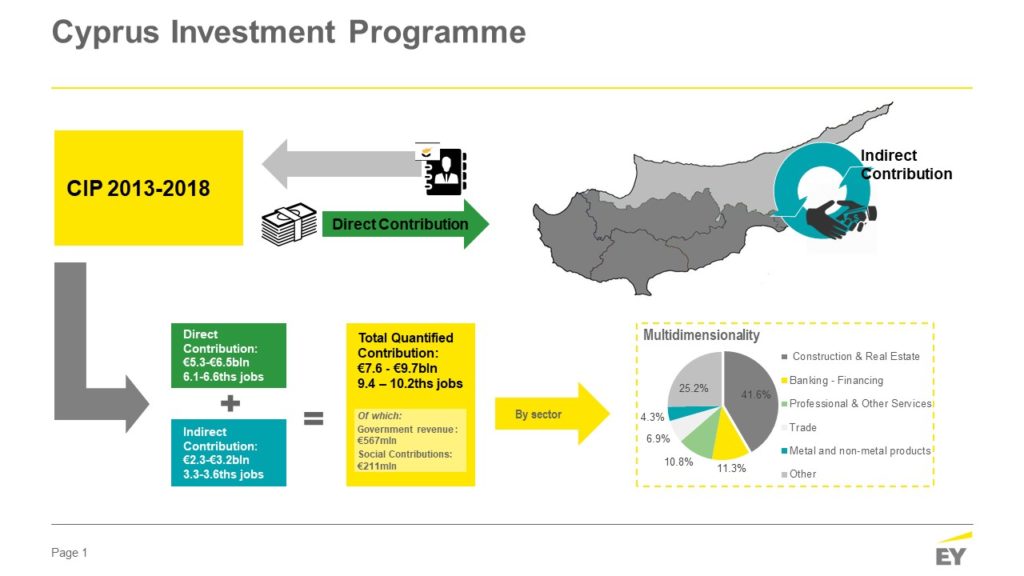 The CIS programme, the darling of accountants, lawyers and property developers on the island, requires an investment of at least €2 mln and purchase of a €500,000 residence plus tax.

Investors also have to pay a €150,000 application fee with the money earmarked for low-cost housing and innovation.

Petrou said that 20 other European countries also have similar investments-for-passports programmes, some of which date back to the 2007-08 global financial crisis.

He agreed that the CIS programme should be enhanced and made stricter.

“Any mistakes in the past are being identified by an independent commission and will be improved,” Petrou added, referring to the lax inspection of applications.

An ‘economic impact assessment’ of the CIS programme, conducted by advisory firm EY, showed that throughout the programme a mere 6% (about €567 mln) of foreign investments in Cyprus ended up in state coffers in fees and taxes, and a further 2% (€211 mln) in the national pension fund.

More than two-thirds of the investment funds lined the pockets of property developers, who were on the brink of bankruptcy.

The new money helped them reduce their non-performing loans to banks, which in turn were hit by the exposure to property-secured debt.

As a result, and due to investments in toxic Greek government bonds in 2011-12, Laiki Popular Bank collapsed and was burdened onto Bank of Cyprus which required two rounds of bail-ins by shareholders and new investors, including Wilbur Ross.

“These investments should also be placed in industry that is the productive part of the Cyprus economy,” said Petrou.

He said investments in property was ‘good’, but a diversification of the investment pie was necessary.

EY’s Alexandros Pericleous, an associate partner who headed the study with data for 2018, said there was a steady decline in investments in financial instruments (fixed deposits and government bonds) and from 2014 onwards a steady increase in the sale of properties worth over €500,000.

Pericleous said improvements in the CIS programme and if the current rate of applications is maintained, the investments and state revenues will remain at the same levels.

OEB officials said some 250 investment-for-citizenship applications are pending and awaiting screening to get approval.

Officially, the Cyprus government has placed a cap at no more than 700 investment-for-citizenship applications a year.

Temporary residency made harder for expats

Finance Minister Constantinos Petrides made a bold declaration this week,

UK and other non-EU pensioners eyeing a retirement home in

Despite its small size, Cyprus’s ambition of becoming a fintech

Christmas has come early in the unseasonal surroundings of the

Over 80% of firms offer remote working

Eurobank to be Hellenic’s largest shareholder