The global downturn, caused by the effects of Coronavirus, combined with a continuous oil and gas glut for 2020, is putting a major damper on offshore gas projects worldwide.

The future of the East Mediterranean offshore projects, some of which were already in doubt, will for sure be hit, with major delays to be expected.

US oil and gas major ExxonMobil already has indicated that it has put on hold its crucial drilling plans to confirm a large gas deposit off Cyprus.

The oil major at present has only indicated that it has delayed to September 2021 it’s verification drilling that was scheduled to take place in Block 10 of Cyprus’ Exclusive Economic Zone.

Financial and operational difficulties have been stated by ExxonMobil as the main reasons behind the delay.

The US major’s approach is likely to be the first of a long list of operators looking at offshore East Med, as extreme low oil and gas prices, combined with demand destruction of more than 25% for oil and an LNG and natural gas glut before the Corona Black Swan appeared, are forcing global E&P spending budgets to be cut dramatically.

As Norwegian-based offshore oil and gas consultancy Rystad Energy indicated in its latest report more than half of 2020 licensing rounds are expected to be cancelled. 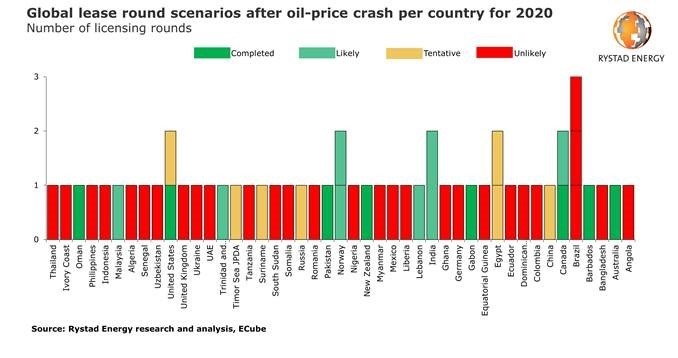 The picture is a very dramatic one, as Rystad assessments indicate that new licensed offshore acreage is likely to fall by about 60% and onshore acreage by 30% compared with 2019 levels.

East Med countries are also on the list, such as Lebanon and Egypt.

The Rystad picture is mainly for upcoming or to be announced licensing rounds, but the pressure on existing development projects or planned drilling exercises are for sure the same.

Offshore Egypt-Cyprus or Israel can be put on the same list, as costs of the planned operations are hefty, needing long-term commitments, while the global gas markets are not looking very bright.

Giant projects such as Egypt’s Zohr, Israel’s Leviathan and Cyprus’ Aphrodite still will continue, as contracts and gas prices have been set.

Others, especially the ones offshore Cyprus or Greece will be hit.

High E&P costs, grand scale offshore pipeline and a lack of demand for gas at present, are not supporting hefty investments of operators.

E&P operators and investors have also become very wary of the big unknown for 2020-2021, what will be the overall impact on global and regional economies when lockdowns are being removed and current government support measures for Corona impact are out.

A V-shaped economic recovery is not very likely, as the impact of Corona on economies is still unclear, EU and government subsidies have prevented a total implosion yet.

Oil and gas companies however already have been put in danger, as revenues are dropping, oil and gas prices are projected to stay low for an extended time and budgets have to be cut.

Even that some licensing rounds, such as in Egypt are still hanging in the balance, it can be expected more are going to be culled.

For Cyprus offshore, the situation was already difficult as not only financial and technical considerations are challenging, but geopolitical and regional tensions are playing a role too.

With still some doubt over the prospectivity of several prospects offshore, such as shown by the negative outcome of the Delphyne-1 drilling, operators will be hesitant to commit to these challenging options.

In 2020, three other exploration drills were scheduled, such as Kronos Block 6, due to France’s TOTAL and Italy’s ENI joining forces in seven blocks, with Korea’s KOGAS also taking part in some of them.

Nicosia needs to realize that all these partners are hit in their wallets right now, budgets for smaller (Cypriot) projects are the first to be culled.

These options are now being reconsidered by the respective operating companies, as the Cyprus concessions are at present not vital or pivotal for the survival of each of them.

When discussing E&P budget cuts for 2020-2021 Cyprus offshore will be on the shortlist to be delayed.

As shown in Lebanon, the interest for offshore blocks and concession rounds was already weak, but now due to the energy demand slump interest will be fading away.

While new projects are threatened or already delayed, more is expected to head their way.

The existing offshore projects (Egypt-Israel) will continue as financials are set and demand is still available.

For other upcoming developments, countries will need to start negotiations with the respective operators and investors.

For Cyprus and others, it is now necessary to keep the attention of the parties involved, without shunning them away.

By increased flexibility, it ensures the current crisis is not another nail in the coffin but offers space to breathe.

Some advantages also are there. The upstream crisis developing also results in lower overall contract costs and puts more pressure on oilfield services to lower their costs too.

By delaying right now, or even renegotiating contracts, fewer investments could be needed than ever was before.  Reality needs to sink in first.

The high levels of optimism about generating short-term revenues for governments from offshore gas should be put on ice.

At the same time, the still ongoing discussions about East Med offshore gas pipeline to Europe should be ended right now too.

Demand in Europe is hit, commercial attractive volumes are available by the dozens, so investing in a rigid transportation system for a South-East European market in crisis is not a real viable option.

COVID19: Over 500 cases reported at schools

On 25 September, Cyprus Pride will happen again, and we

Cancer patients who sued and won their initial case against

Due to the summer and the relaxed spirit that prevails,

COVID19: Over 500 cases reported at schools

A creaky start to the school year