A frequent French naval presence in the Eastern Mediterranean, especially Cyprus’ EEZ, sends a clear message to Turkey that creates instability and tensions in the region, said President Nicos Anastasiades.

He made the comments in his address Saturday onboard the French aircraft carrier Charles de Gaulle docked in Limassol port.

“The deployment of France’s major aircraft carrier group to the Eastern Mediterranean region, and in particular here in Cyprus, is another testament of the on-going, qualitative upgrading of the relationship between Cyprus and France, a country which we consider both as a friend and a partner”.

“This relationship is not only mutually beneficial but also of strategic importance that seeks to address the serious challenges that we face in our wider geographical area.”
Anastasiades said Paris and Nicosia share the “same values, interests and concerns but also the same vision for peace, stability and prosperity in our region”.

“ The presence of this powerful aircraft carrier in our region contributes to the goal of achieving a permanent naval French presence in the Eastern Mediterranean and proves the will of France to act as a stabilizing factor in our neighbourhood”. 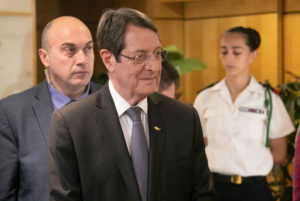 Cyprus and France have enhanced their relations on multiple levels, looking to deepen cooperation in security and defence.

“Not only is the French Republic is one of the primary armament suppliers of the National Guard, but I am also glad to attest that over the past months we have enhanced our cooperation in the maritime domain, with the execution of joint naval exercises.”

“A frequent French naval presence in the Eastern Mediterranean and in particular within the EEZ of the Republic of Cyprus sends a clear message to those that aim to sow instability and tensions in the region”.

Anastasiades said Turkey continues to act in an “aggressive manner” by resorting to military threats, illegal drilling activities within the EEZ of Cyprus, and signing an illegal Memorandum of Understanding on the delimitation of maritime jurisdictions in the Mediterranean with Libya.

“Actions which have been condemned in the strongest manner by the international community and the EU.”

He said that “these confrontational actions escalate tensions in our already very volatile neighbourhood, and have also extremely negative consequences on the prospect of resuming talks on the Cyprus Problem”.

Cyprus House President Demetris Syllouris said he will forego his