The Council of Europe hosted a conference “Act for Heritage 2019” in Cyprus recently to revisit the Nicosia Convention at its birthplace and collect signatures for criminalising the illicit trade of antiquities.

Representatives of various countries were invited to give their concerns and reservations for ratifying the convention, but key players in the art market were not present to hear what was said.

The main concern expressed during the conference was that the art market is not regulated and that illegally excavated antiquities are still finding their way into auction houses and galleries.

Speakers from UNIDROIT and UNESCO stressed the importance of regulating the market through existing tools and not introducing newer conventions, which would make their implementation harder.

They believe that the Nicosia Convention has the potential to update and replace earlier legal instruments which have proven to be ineffective.

A key point not addressed fully at the conference was that although it is agreed that some degree of regulation is required in matters of due diligence before any sale of an item, there was no acknowledgement that self-regulation does take place among the majority of the leading stakeholders.

The absence of the art market at the conference did not allow for a fair discussion on this matter.

The sole counter-argument to the criticism from UNESCO and UNIDROIT came from CINOA, the international body representing art and antique dealers.

In her presentation, “Fact, fiction and the role of the trade in protecting cultural heritage”, Erika Bochereau, Secretary General of CINOA agreed that there need to be laws, but these should be proportionate and workable.

“CINOA would like to see a clearer public acknowledgement of the many and varied laws that already govern the art market. It would also like the legislators to set out their justification for further regulation in the context of all the existing laws.”

Neil Brodie, a senior research fellow at University of Oxford and co-author the European Commission report “Illicit trade in cultural goods in Europe”, said that to raise awareness two things are required, better information sharing and a central unit of cooperating regulatory bodies.

Bochereau said there are some 150 pieces of legislation that makes the art market highly regulated nationally and internationally, with five new laws introduced in the last two years alone.

“Much of the existing legislation, already offers solutions for the issues identified by the Nicosia Convention. This begs the question as to why further laws are necessary as the current legislation is working.”

On the proposal to introduce regulation in the industry, Katya Hills, Business Development Manager at the Art Loss Register, said: “digitisation and globalisation have led to greater scrutiny of artworks for sale”.

She told the Financial Mirror there is growing public awareness of issues such as theft, money laundering, terrorist financing, fraud, fakes and forgeries.

“Though there remain many who are not undertaking appropriate levels of due diligence, the art market is self-regulated, and a growing proportion of the sector is carrying out research into the seller, the provenance, authenticity and condition of works.”

In his speech at the conference, Edouard Planche, UNESCO’s Regional Cultural Adviser and Head of Culture Unit said, “the international legal intervention is strong enough (including the Nicosia Convention), so now we must focus on implementing the existing conventions rather than creating new ones.”

He suggested eliminating dubious provenance and discouraging clandestine excavations by raising awareness for the protection of cultural heritage through audiovisual materials, referring to a UNESCO video production on “End trafficking, save culture” about Syria.

Planche insisted that those who are involved in cultural heritage must be reminded to abide by basic due diligence.

His comments showed that UNESCO does not acknowledge the level of due diligence which is, in fact, being carried out by those in the art market, a misconception shared by many at the conference.

These arguments could be the reason why there is hesitation by CoE member states to ratify the Nicosia convention.

Two of the four working groups showed the disparity among views between government bodies and the art trade and remained divided even in their concluding remarks. 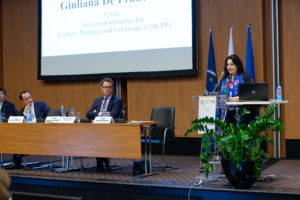 Moderator Athina Chanaki, Deputy Legal Counsellor at the Greek Foreign Ministry, announced the conclusions of the second working group, ‘Role of civil society, business and governments in preventing offences related to cultural property’, which raised a few eyebrows in the audience.

Chanaki listed three main points which were not fully accepted by all working group members.

She said the art market has taken measures to implement a degree of due diligence, but these are not enough and that government must decide on a group of professionals who will carry the responsibility of implementing “a necessary level of regulation”.

She claimed that it was “agreed by the delegates” that auction houses and art dealers should record every sale in a ledger, which would be accessible and available to law enforcement.

It is widely known that this is difficult to implement as it would unnecessarily slow down the trade and specifically auction houses and disrupt the current working relationship between law enforcement and the industry.

Dealers are often victims themselves

Chanaki argued that all dealers ought to be strictly licensed and those who are non-compliant would lose that license.

This opinion again is flawed, as it does not take into consideration that dealers who do conduct a level of due diligence are often themselves victims of wrongful information arising from illicit trade.

Speaking last week at the European Parliament, James Ratcliffe, General Counsel of the Art Loss Register, the world’s largest private international database of stolen art, said that to encourage those who are not playing by the rules to conduct the appropriate level of due diligence for an item, the process of due diligence needs to be simplified.

“A due diligence database is an essential tool for restitution, though due diligence should always be more than just a database check,” Ratcliffe told the EP Committee on Legal Affairs in Strasbourg.

“We believe that the best solution is for one such database to cover all types of issues that might affect an artwork, to be global in its scope, to be a closed, managed database, and to work with the market.”

The Nicosia Convention, which opened for signatures on 19 May 2017, still has a long way from passing as a uniform bill in national legislatures.

For this to happen, at least five countries need to sign and ratify the convention, three of which must be members of the EU.

To date, 12 countries have signed, but so far only Cyprus and Mexico have both signed and ratified the convention.

In the working groups of the “Act for Heritage 2019” conference, a spokesperson for Greece raised some reservations surrounding the severity of liability for any country or individual unknowingly accepting stolen goods.

Another question raised was what sort of customs regulations will there be once the convention is ratified and what will the penalty be for the destination country?

Though Greece is more likely to be a source country, where in the past antiquities have been illegally excavated from unmarked archaeological sites, it points out a key factor which may cause many countries to be hesitant to sign and ratify the convention.

Some countries disagree with the definition of “cultural property”, as this terminology may refer to items which may not ultimately be protected by the convention.

The phrase “cultural property” may need to be redefined to ensure the articles in the convention are relevant to the universal definitions of this phrase.

Poland pointed out that it is crucial to include the protection of items that may not be strictly considered to be cultural heritage, such as monuments. This is not mentioned in the convention.

Despite these objections, none of the delegates mentioned the reservations of the art trade in their own countries who are at the forefront and can fall victim to the illicit trade of cultural artefacts.

The concern of the art world is the severity of the penalty and the liability on art dealers should they unknowingly sell a stolen item.

The conference concluded with calls for more funding and better education to raise awareness of the illicit trade of cultural heritage.

It was suggested to engage with the art market representatives in the promotion and implementation of the convention in the future.

We will see if this will be implemented.

The author is an art advisor and collections consultant, specialising in museology, trafficking culture and forensic art.

While deposit rates are at rock bottom with some banks

A frequent French naval presence in the Eastern Mediterranean, especially