Delivery service Wolt denied reports that its platform could not provide services on Thursday, as drivers took to the streets protesting salary cuts.

Although the company denied a disruption to services, its website told a different story.

Around 150 Wolt drivers were in Nicosia protesting for the third day in a row, with drivers claiming their wages continue to be slashed amid increasing fuel costs, which they must cover, and higher cost of living.

A message on the Wolt website and app now reads: “Hello, Wolters! We have momentarily limited our delivery offering to venues close to you, and delivery times might be longer than usual.

“Big apologies – we’ll return to normal as soon as possible!”

However, Wolt’s communications officer, Akis Stamatoulis, told Kathimerini Cyprus edition that the platform had no issues with its delivery services.

Asked to comment on claims made by delivery drivers, Stamatoulis said their anger was directed at fleet managers contracted by Wolt and not the company itself.

He argued that 80% of drivers report to fleet managers whom Wolt pays to oversee deliveries.

Wolt said there is no reduction in pay-out while arguing the formation of earnings is a dynamic process factored by the time the order was sent, distance, accessibility, and availability of distributors.

“So, some orders are paid more and some less; however, these are regulated by the distributor companies and not by the platform.”

Stamatoulis responded to drivers’ claims that their Wolt accounts were deactivated in response to their industrial action, arguing that this only applied to drivers who had accepted delivery orders and did not turn up at the pickup point. 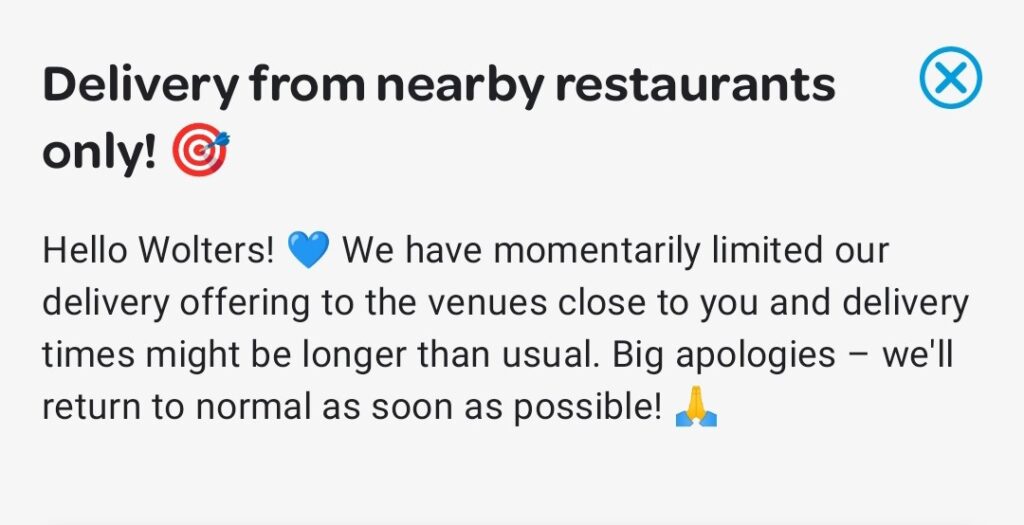 Drivers talking to the Cyprus News Agency said they are paid €2.40 for each delivery route, of which their employer keeps 41%, with Wolt intending to reduce it to €2.26.

As drivers said, the company’s intention to do this was the main reason for the strike.

They also reported working under adverse conditions, as they are asked to pay for their own fuel, protective equipment, and distribution bags and are obliged to cover any damages to products.

Drivers want the compensation per route restored to €2.60, as previously, and €4.00 for Fridays and €3.50 for Saturdays.

They also want compensation of €0.50 per kilometre for all routes and €1.10 for deliveries in bad weather.

The percentage kept by fleet managers be reduced to 30%, instead of the current 41%, is another demand.

Most drivers are third-country nationals and accuse the fleet managers of exploiting them because of that.

“It is difficult for third-country nationals to find work here, even with an education.

“But it is a very dangerous job, with frequent accidents, with occasional racist attacks,” one driver told CNA.

A video of an angry police officer shouting at protestors, telling them they had no right to demonstrate, was shared on social media.

AKEL-affiliated trade union PEO came out in solidarity with Wolt delivery drivers, arguing they are subjected to “medieval working conditions.”

“We stand in solidarity with Wolt delivery workers, who are facing a series of problems since even the legislation is not respected,” Michalis Tsikkouris, PEO District Secretary, said.

Tsikkouris confirmed that workers had been informed of wage cuts.

“Delivery drivers are not even entitled to sick leave or holidays.”

A strong earthquake registering 7.8 on the Richter scale in

More women want to be entrepreneurs