The year 2021 turned into a fantastic year for Dogecoin, as the meme-inspired cryptocurrency reached record valuation and became one of the top ten cryptos by market cap.

However, besides bringing sizeable investment returns, Dogecoin’s mining profitability also surged in 2021, according to data presented by BlockArabia.com, soaring 700% since the beginning of this year.

Dogecoin came a long way since its modest beginnings in 2013. The digital coin created as a meme-inspired joke became the ninth-largest cryptocurrency globally, boasting a $31 bln market cap and a global fanbase. Its incredible growth over the last nine months has also attracted a record number of miners to its network.

Dogecoin’s blockchain network employs the same system to add new blocks to its decentralised ledger and reach agreement among its network participants as Bitcoin, Litecoin and many other cryptos. 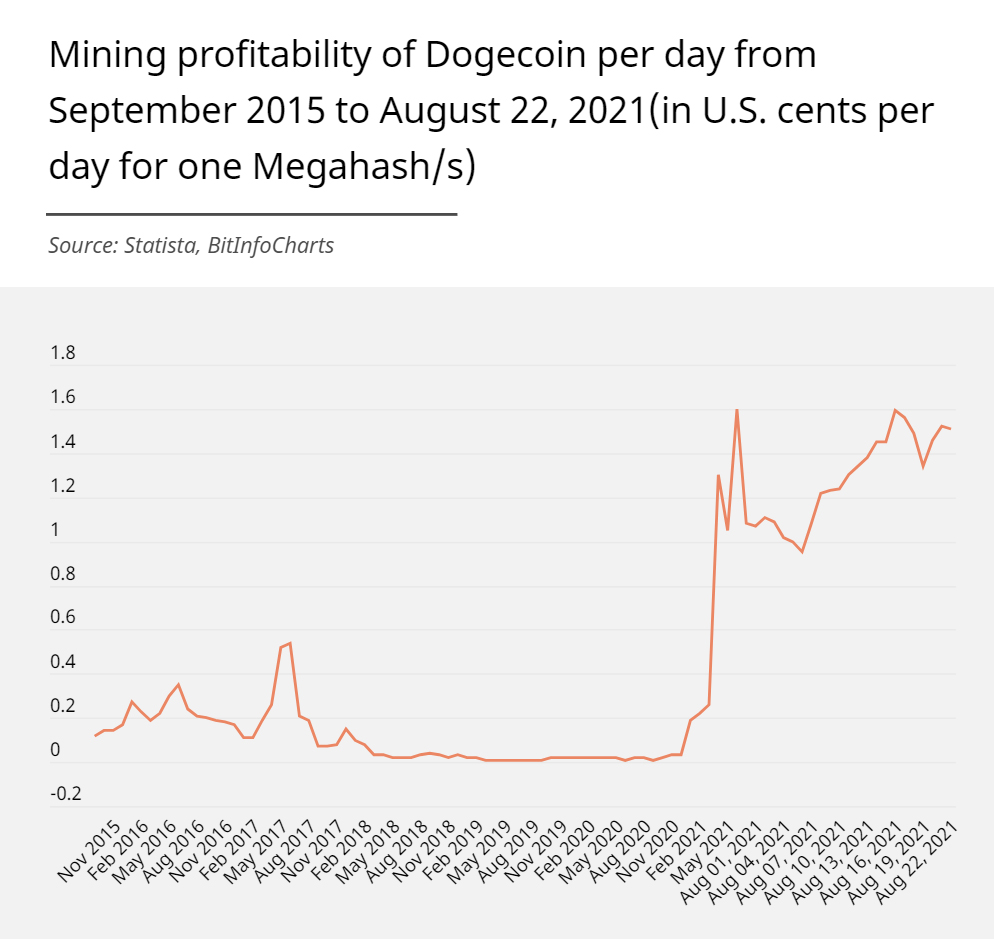 During the mining, a computer is trying to solve complicated logic puzzles to verify transactions in the blockchain. When this process is completed, the miners receive 10,000 DOGE coins per block as a reward.

PCs with more computing power, or hashrate, are likely to solve more puzzles and mine more cryptocurrencies. But the profitability of the entire process also depends on electricity consumption, transaction fees, and hardware efficiency.

According to the BitInfoCharts data, mining a single Dogecoin returned a profit of 0.19 US cents in January. By the end of June, this figure jumped to 1.6 cents. Despite falling to 1.51 cents last month, Dogecoin mining profitability still surged by nearly 700% since the beginning of the year.

These fees refer to the money paid to the crypto miners to get transactions accepted. The cost rises when the number of users grows, as the blockchain has limited space available to process all the transactions.

Therefore, increasing transaction fees indicate the number of Dogecoin transactions waiting in line to be processed and are also an incentive to process large and more profitable transactions.

In December 2020, the fee for a transaction involving Dogecoin amounted to 0.19 cents. Statistics indicate this figure skyrocketed to 1.51 cents last month, showing a whopping 6,700% increase.