Authorities have dropped disciplinary proceedings against headteacher and artist George Gavriel, whose controversial paintings lambast the church and politicians, amid wide condemnation of the government’s heavy-handedness.

In an announcement on Wednesday, the Cabinet said they authorised Education Minister Prodromos Prodromou to reach out to Attorney General George Savvides to ask for the disciplinary case to be stopped.

The announcement spread confusion as, just hours earlier, the Attorney General had said that his office had nothing to do with the case.

“The Legal Services deal with criminal prosecutions and not disciplinary cases, which are handled by the relevant bodies,” Savvides said.

However, the Cabinet’s decision is interpreted as a sign of the Education Ministry backing down from sacking the controversial headteacher and his artwork.

The artist told the Financial Mirror he was pleased with the outcome.

“I would like to thank everyone who supported my case, from MPs across the board.

“This goes to show that with solidarity, we can overturn decisions which go against the nature of the democratic state, its laws and the laws and principles of the European Union,” said Gavriel.

Nevertheless, the government stopped short of admitting the Education Ministry was wrong to censure the school headteacher.

The Cabinet argued the teacher’s works were “in violation with the letter and the spirit of the regulations governing the conduct of education officials and directors”.

“In consideration of reactions from political forces and the art world who considered the freedom of artistic expression persecuted…even if for many citizens it is a provocation and an insult to institutions.”

It said this decision was taken “to avoid creating wrong impressions about the government’s intentions.”

Meanwhile, the ruling party DISY officially distanced itself from Education Minister Prodromos Prodromou by issuing a statement earlier on Wednesday, arguing that the disciplinary procedure was wrong.

As DISY said in a statement: “We disagree with the disciplinary prosecution of anyone for their artwork, no matter how offensive we consider it.

“Freedom of artistic expression and its courageous critique are integral elements of our liberal democracy, and we do not invoke them selectively, as many of its late ‘supporters’ do today”.

House Speaker Annita Demetriou tweeted: “It’s one thing to criticise artwork and various forms of artistic expression, and another to be prosecuted for the way you express yourself through art.”

“Any art form does not threaten democracy and Education, and no one is meant to be persecuted for their artistic expression,” said Demetriou. 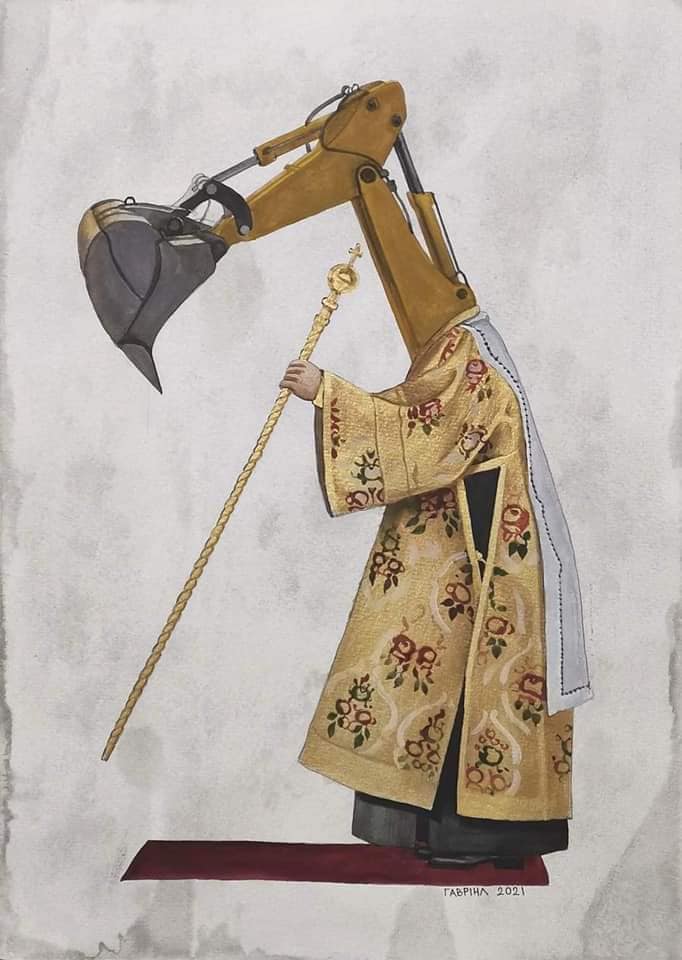 The Education Ministry launched a disciplinary probe into Gavriel, who was to appear before the Educational Service Committee on 6 October.

Gavriel could have lost his job had he been found to violate the regulations.

The art teacher and headmaster at a state high school in Nicosia drew the ministry’s attention after releasing some of his latest paintings on social media, which he calls “anti-establishment art”.

His work includes paintings depicting the Archbishop as a money-hungry businessman, with dogs peeing on him; another has President Nicos Anastasiades naked, holding a sceptre in one hand and a bottle of a well-known whiskey brand in another.

Take charge of your IBAN

The outlook for the global shipping industry is changed to

Shops on the once busy Makarios Avenue in the capital’s

Booster shots are available to all adults over 18 from

Cyprus can expect more bad weather this week after the