Last year, the Covid-19 pandemic dramatically impacted global energy markets, with primary energy and carbon emissions falling at their fastest rates since the end of WWII, according to BP’s annual Statistical Review of World Energy.

The data collected in this year’s edition includes energy data for 2020 – one of the most turbulent years the world has seen.

This year’s Review captures the dramatic impact the pandemic had on energy markets and how the ‘year of COVID’ may help shape future trends.

This was driven mainly by oil, which accounted for almost three-quarters of the net decline.

Natural gas prices also declined to multi-year lows; however, the share of gas in primary energy continued to rise, reaching a record high of 24.7%.

Meanwhile, wind, solar and hydroelectric generation all grew despite the fall in overall energy demand.

By country, the US, India, and Russia saw the largest declines in energy consumption. China saw the largest increase (2.1%), one of only a handful of countries where energy demand grew last year. 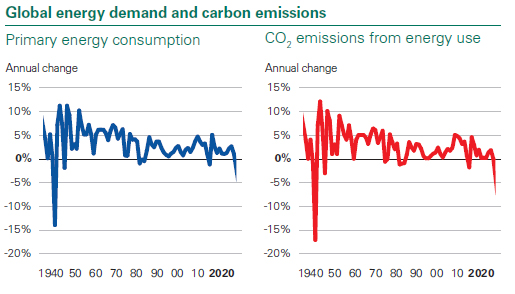 “For the Review – as for so many of us – 2020 will go down as one of the most surprising and challenging years.

“Encouragingly, 2020 was also the year the share of renewables in global power generation recorded its fastest-ever increase – a growth that came largely at the expense of coal-fired generation.

These trends are exactly what the world needs to see as it transitions to net-zero – strong growth in renewables crowding out coal,” Dale said.

“The importance of the past 70 years pales into insignificance as we consider the challenges facing the energy system over the next 10, 20, 30 years.

“To reach net-zero, the level of ambition shown by countries and companies needs to translate into significant, sustained falls in emissions.

“Everyone, from business to governments to consumers, has a role to play in delivering that.”

Bernard Looney, bp’s CEO, added: “This year’s Review provides all of us with the objective and timely data needed to make sense of the most tumultuous events affecting energy markets in any of the past seven decades.

“Companies like bp with net-zero ambitions, coherent plans, and near, medium and long-term aims – companies which are committed to ‘greening’ – have a hugely significant part to play in achieving the Paris goals.

“But maybe more than anything, it also needs existing energy companies to decarbonise and in so doing use their scale and expertise to help bring about the deep and complex rewiring and replumbing of the global energy system that the world wants and needs to see over the next 30 years.

“It will take producers and consumers, as well as companies, governments, and society, all working together to bring about the necessary change.”

Since it was first published in 1952, the Statistical Review has been a source of objective, comprehensive data and analysis to help industry, governments, and commentators understand and interpret developments in global energy markets.

Over time, the Review has provided insights into some of the most dramatic episodes in the history of the global energy system, including the Suez Canal crisis in 1956, the oil embargo of 1973, the Iranian revolution in 1979 and the Fukushima disaster in 2011.

The following are some of the Review’s highlights concerning the different types of fuels: 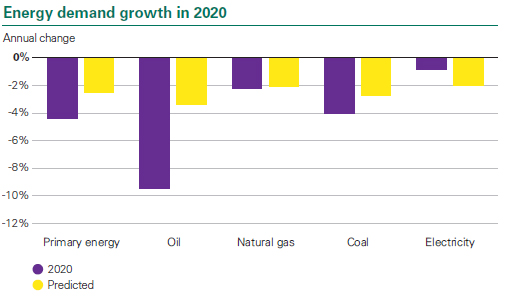 COVID19: No deaths as cases stabilise

We need to embrace failure

Why the ‘big potato’ is new Eiffel Tower

Wrong-way to keep costs down

Cyprus reported one coronavirus death on Friday, a drop in

The EuroAsia and EuroAfrica Interconnector projects should know about EU

Turkish Cypriots are reeling from a shifting landscape after the

COVID19: No deaths as cases stabilise