For different reasons, each of the two main commodity products with high marketability, oil and copper, have for a few weeks now entered a new upward cycle, or “super cycle”, according to executives of stock exchanges that specialise in commodities.

But there is a common denominator of the sharp rise in oil and copper prices, which is none other than the observed steady recovery of the world economy, despite the rapid spread of the coronavirus in India and Brazil and the observed anaemic trend of the eurozone (-0.6% 1Q201).

With the US economy running in the first quarter at a rate of +1.6% compared to 4Q2020 and estimates for +6.4% for the whole of 2021, in the aftermath of the fiscal stimulus package of $1.9 trln, and the upcoming employment and infrastructure package (we’re talking about an extra $ 2.0 trln) promoted by the Biden administration, and China’s economy to have fully recovered from the pre-coronavirus period and to grow at a rate of +18.3% in 1Q2021 and a target of +6.0% for all of 2020, the demand for oil and other fuels as well as for a wide range of industrial raw materials is particularly strong.

For oil, the drivers of the price recovery are mainly the increased demand in China, USA, SE Asia and Japan in combination with the containment of production from the OPEC+ and the reduction of supply from countries outside the cartel (USA, Canada, Mexico, Norway, etc). In fact, if it were not for the high stocks that were built up during the reduced demand in 2020 due to the coronavirus, prices would have been even higher, say market observers.

However, as demand for mineral raw materials intensifies in the coming months (despite the “green story” of Brussels, which has already discounted the end of crude oil), production is expected to rise as OPEC+ is almost certain to revise the production ceiling upwards, thus wanting to reward many of its members who fully complied with their production restrictions (based on agreed quotas) in order to restore some balance to the world market.

So crude prices that have recovered to pre-covid levels to $68 a barrel for Brent, the international benchmark may continue to rise for a few more weeks with Goldman Sachs talking about $80 a barrel by summer. But the chances are that in the second half of 2021 with the demand in the world as a positive sign, the operation of the markets will return to older patterns behaving more according to the market fundamentals. Everything will depend on the demand and the pace of its recovery.

However, the observed strong demand and the consequent increase in prices do not only concern oil but a whole range of raw materials such as wood, iron ores, industrial metals – nickel, copper, cobalt, lithium – as well as crops and food.

The rise in the price of the above products is very eloquently reflected in the Bloomberg Commodity Index, where 30% of its value is determined by energy stocks.

Since the beginning of the year, the value of this index has increased by 15%, while in April alone it appreciated by 8%. It is worth noting that commodity values have been experiencing a similar peak since 2011. 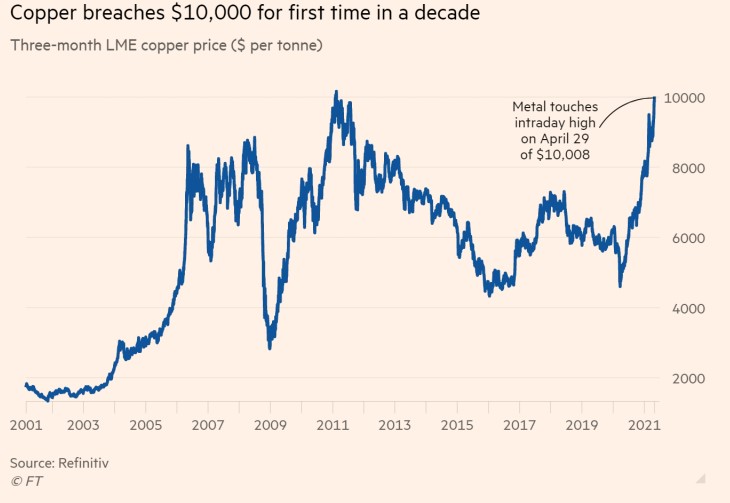 As observed by commodity market participants in London, which is known to be one of the two major international trading centres for commodities, the strong worldwide growth, combined by interruptions, due to covid, of the production chain of many countries, created a squeeze in the natural commodity market so that demand outstrips supply, at least for the current period.

Another reason pushing the commodity market to new heights is the appetite of some investors to invest in tangible assets in an effort to hedge the emerging inflationary risks.

In the case of industrial raw materials, the situation in terms of demand and prices appears slightly different from oil. A prime example is copper, which hit new highs last week at $10,000 a tonne, having risen 136% in the past 12 months.

With copper remaining a staple material in the construction industry in general, experts estimate that it will play a key role in the so-called “green economy” and in turning away from hydrocarbons.

However, many of these experts rush to characterise copper as the “new crude oil”.

Costis Stambolis is a Financial Mirror correspondent, based in Athens.

University of Nicosia scientists have simulated what would happen if