After months of failed negotiations, Congressional leaders have finally reached a deal on a $900 billion economic relief package to boost the US economy.

Although this agreement is less than half of the $2 trillion deal that House Speaker Nancy Pelosi and the Trump administration were close to securing before the November election, ‘half a loaf is better than no bread’ as they say.

The stimulus breakthrough failed to lift risk sentiment Monday morning as Asian shares dipped amid unease over a new virus strain in the United Kingdom.

With the lack of progress on Brexit talks also likely to blunt appetite for risk, European markets are set to trade on a soft note. Market volatility may cool over the next few days, especially if investors head for the sidelines ahead of the Christmas break on Friday.

Negotiations between the U.K. and European Union will resume Monday after both sides missed yet another deadline to reach a post-Brexit trade deal.

Given how the European Parliament had already warned that it would not be able to ratify any deal in 2020 unless it had been presented with one by Sunday, where do we go from here?

With ten days left until the transition period ends, time is running out for a Brexit trade deal. It is becoming clear that EU fishing access to UK waters after Brexit remains the major obstacle in any progress in talks.

We are now very used to the constant back and forth around Brexit negotiations which we have seen over the past few years, but the week ahead could be tense for Sterling as the hard deadline of 31 December looms.

On the technical side, the Pound woke up on the wrong side of the bed on Monday thanks to rising fears around a no-deal Brexit. It has weakened over 1.5% against the Dollar, approaching the 1.3300 level in early trading. A break below this support may open a path back towards 1.3200.

The bipartisan breakthrough in US stimulus talks has injected Gold bulls with enough confidence to challenge the $1900 level.  Buying sentiment towards the metal is likely to remain supported by coronavirus-related concerns and a weaker US Dollar.

Gold has appreciated almost 7% this month and could extend gains if bulls are able to maintain control above $1900. But this level could prove to be reliable resistance, which means a decline back towards $1850 would be on the cards. 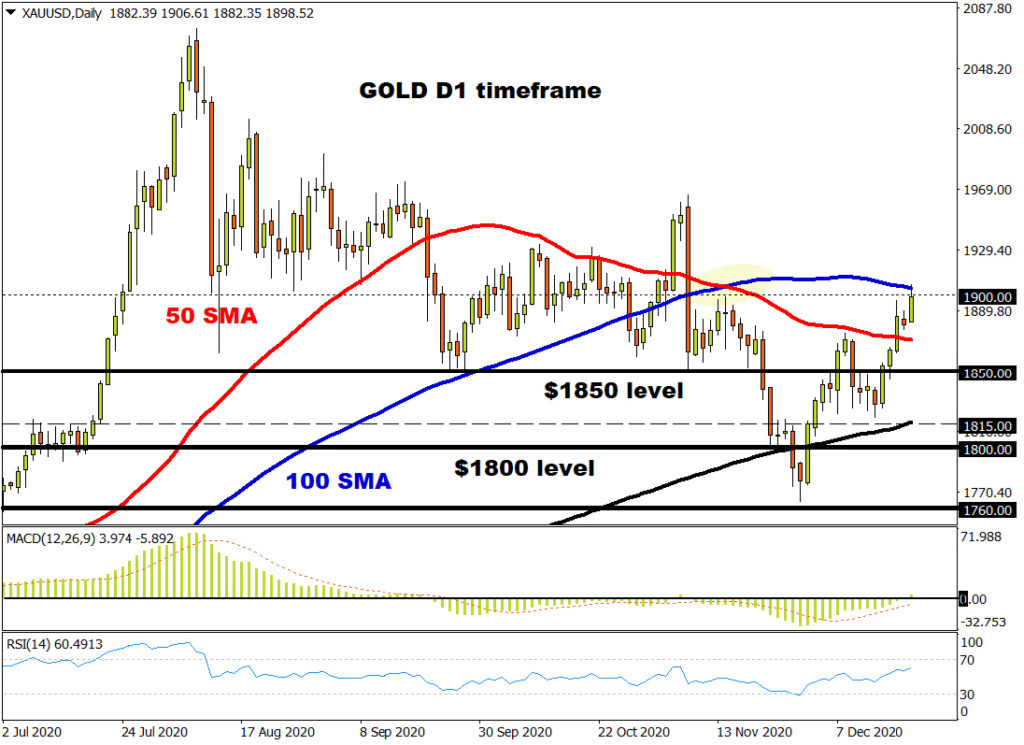 Market bottom is close, prepare for a rally