From the perspective of the U.S. equity market, COVID-19 is the worst natural disaster ever. After setting a record high on February 19, the market value of U.S. common stock has subsequently plummeted by $10.8 trillion, or by 31.2%, to its lowest close since January 30, 2017.

A prospective swelling of the U.S. government budget deficit in response to a COVID-19-inspired surge in federal spending now menaces the outlook for Treasury bond yields. However, the Fed has the power to counter any unwanted climb by Treasury bond yields by purchasing Treasury bonds, which is also known as quantitative easing. Both the European Central Bank and the Bank of England recently announced new quantitative easing programs. Perhaps, the Fed will soon do likewise. 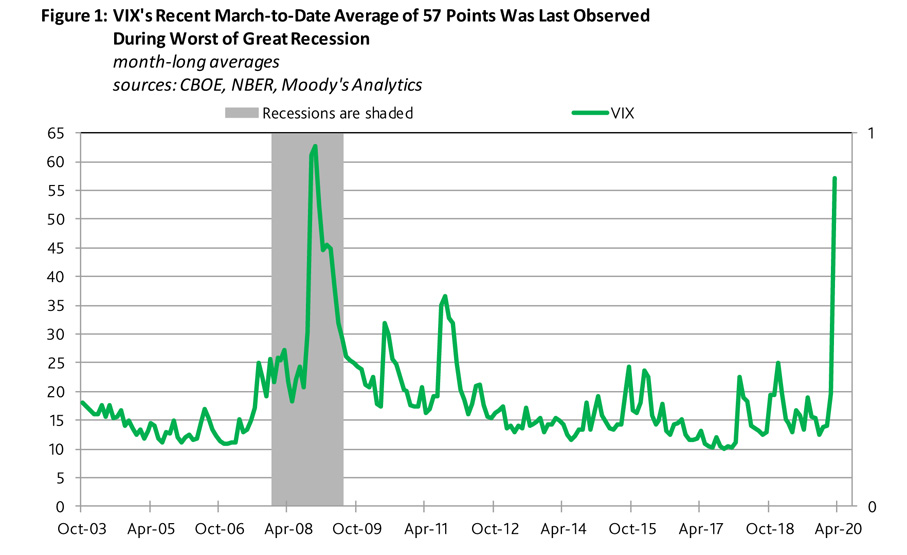 Regarding federal spending, some liken the current battle against COVID-19 to a wartime situation. Thus, it may be of interest that during the World War II years of 1942 through 1945, the U.S. government’s budget deficit averaged 22.2% of nominal GDP, wherein the annual budget deficit peaked at 1943’s 30.3% of GDP. For now, it’s doubtful that the ratio of the federal budget deficit to GDP will approach the extremes of the Second World War.

The U.S. government budget deficit of calendar-year 2019 approximated 4.8% of GDP. An early March Bloomberg consensus forecast had 2020’s federal budget deficit edging up to 4.9% of GDP, but that projection is likely to be very much on the low side.

During World War II, outstanding U.S. government debt peaked at 120% of GDP. Currently, U.S. government debt approximates 80% of GDP, where the latest Bloomberg consensus expected federal debt to edge up to 81.3% of GDP by 2020’s final quarter. That projection is also likely to prove to be too low.

Nevertheless, the U.S. equity market was substantially higher one year later for 13 of the 14 months where the VIX averaged more than 30 points.

For the six months showing a month-long average for the VIX above 40 points, the monthly average for the market value of U.S. common stock 12 months later was higher by 33% year-to-year, on average.

For the nine months showing a month-long average for the VIX above 35 points, the monthly average for the market value of U.S. common stock 12 months later was higher by 32%, on average.

Corporate bond yield spreads will widen considerably from their already very broad bands if a now ultrahigh VIX does not plunge by more than 40 points from its recent 69 points.

Though VIX’s average fell to 45.0 points during 2009’s first quarter, the accompanying averages barely dipped to 510 bp for the long-term Baa industrial company bond spread and to 1,627 bp for the highyield bond spread.

As of March 18, the long-term Baa industrial company bond yield spread was at 357 bp, which was the widest since the spring of 2009, while the composite high-yield bond spread of 988 bp was the broadest since June 2009.

A now weak and volatile U.S. equity market helps to explain the lift-off by MA’s average high-yield expected default frequency metric from year-end 2019’s 4.18% to March 18’s 10.62%. The high-yield EDF last broke above 10% in October 2008. During the Great Recession, the month-long average of the high-yield EDF eventually crested at the 14.6% of February 2009. Ultimately, the U.S. high-yield default rate peaked at November 2009’s 14.7%.

Unlike the average high-yield EDF, February 19’s VIX was less than its post-September 2003 median of 15.7 points. Coincidentally, the VIX’s 2020-to-date bottom is the 12.1 points of January 17, or the final close before COVID-19 fears first rattled U.S. financial markets.

Cyprus’ tourism sector is holding the fort, keeping the economy

Cyprus football continues to draw the attention of foreign investors

Cyprus economy to grow by more than 5% this year

Cyprus’ economy is expected to grow by more than 5%

Truss ‘War of Independence’ over BoE will spook markets

Inflation will remain above 7% over next 18 months – survey