In the biggest facelift, Larnaca has witnessed the port and marina redevelopment project will change the town’s future landscape creating 4,000 jobs and generating billions for the economy.

Cyprus has reached an agreement with Israeli investors for the long-awaited €1.2 bln redevelopment of Larnaca port and marina, the island’s largest infrastructure project of its kind.

The project covers the restructuring of Larnaca marina for 650 berths, the port and surrounding land development over an area of 332,449 sqm which is expected to see the consortium invest more than €1 bln.

As part of the marina development, there will be a yacht club with a retail park, a passenger terminal at the port plus hotels, a private island and residential properties.

The unprecedented scale of the project includes residential and commercial development with innovative architecture, streets, and parks.

“This area has been underutilised for so long, there is now a new vision for Larnaca which took over three years to negotiate,” said Larnaca mayor Andreas Vyras at the first official presentation.

“This is a new era for Larnaca and Cyprus with the tradition and culture of our town taken into account,” he added.

“The people of Larnaca have been waiting for this for a very long time. I’m sure it will exceed our expectations.” 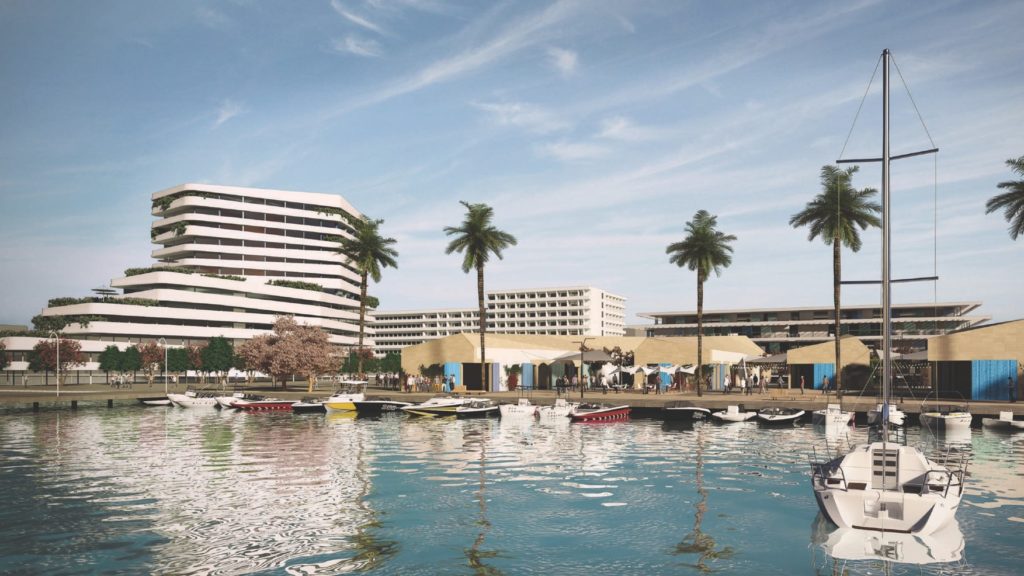 Israeli ambassador Sammy Revel said the venture was a symbol of the flourishing partnership between Cyprus and Israel.

“There is a Cyprus-Israel bond in energy, tourism, shipping and new technologies,” said Revel.

He added: “This will help future generations of Cypriots to prosper.”

Kition Ocean Holdings CEO Panos Alexandrou said Larnaca port and the marina has never been developed to its full potential despite having the largest airport and oldest harbour.

He said the masterplan’s vision is to connect the historic town centre with the waterfront.

“This development is about sustainability, identity and creating a landmark project,” said Alexandrou.

He said infrastructure work on the marina, building a new link road and passenger terminal to serve large cruise ships are part of Phase I which covers the first five years.

“This will change the face of Larnaca for many years and centuries to come.”

Alexandrou said the ambition was to have the best state-of-the-art port in the Eastern Mediterranean which will also offer services for gas exploration and facilitate military ships.

The build-operate-transfer project involves UK-based Prosperity Group, a Cypriot-owned company with extensive experience in international large-scale mixed-use developments and Israel’s REM International which is part of the group that owns and manages the port and marina of Eilat in Israel.

Eilat is the number one tourist destination in Israel handling 5 million passengers.

Under the proposed venture, it is estimated that the state will receive more than €19.6 bln during the lifetime of the project which includes the 125-year lease on the real estate.

The BOT project will see the government receiving a fixed rent and a percentage of the revenue generated through a concession agreement with the port/marina operated on a 40-year lease and the real estate is acquired on a 125-year lease.

After 40 years the port and marina can be handed back to the government who will then decide on their management.

The complete project will span over 10 years as it includes building two hotels (lifestyle/business), nine office buildings (mixed-use) of up to 15 floors each and six luxury apartment blocks up to 13 floors each.

There will be large residential and commercial real estate development to support the marina and port, with affordable housing so people can live, work and set up business in the area.

Larnaca’s rundown marina will get a totally new look with modern amenities and facilities including a dry repair dock and a place where yachts can be built.

To make it a modern productive port it needs to have lights, there’s no passenger terminal, plus new cranes are also required.

There are also ideas for a tax-free shopping centre as a connecting point to the port.

Local authorities, businesses and other stakeholders are keen to see the project take off as Larnaca will benefit significantly from the development.

The venture will upgrade Larnaca to the standard other towns have reached over recent years, and not be considered the poor neighbour anymore.

Plans also foresee the construction of luxury homes along the Larnaca marina which will more than double in size.

Contracts are expected to be signed by end of March with the takeover completed by the end of the year.