Cyprus on Sunday accused Turkey of “piracy” after Ankara announced new plans to drill for oil and gas in the divided island’s maritime zone, a move escalating tension despite the threat of EU sanctions.

“Turkey is turning into a pirate state in the Eastern Mediterranean,” said a statement from the Cypriot presidency on Sunday.

It said this new violation was happening against a backdrop where Cyprus joined Greece, Israel and Egypt establish the East Mediterranean Gas Forum in Cairo and the signing of the ambitious EastMed pipeline to Europe in Athens.

“Turkey insists on going down the path of international illegality it has chosen,” the statement said.

Nicosia condemned Turkey’s new phase of  “illegal drilling activity” within its economic exclusion zone and continental shelf as a “provocation”.

The statement said this new incursion in Cypriot waters was inside block 8, licensed by Cyprus to energy giants Total of France and Italy’s Eni. 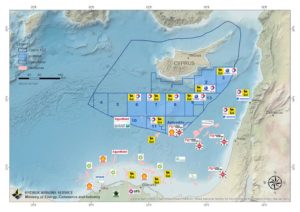 “This new attempted drilling constitutes yet another flagrant violation of the sovereign rights and jurisdiction of the Republic of Cyprus under the UN Convention on the Law of the Sea.”

This prompted EU leaders to warn Turkey that it would impose “targeted and appropriate” sanctions if it did not stop its “illegal activities”.

The region’s rich natural gas deposits have triggered a race between Turkey and Cyprus, which also plans to ramp up its exploratory activities in the eastern Mediterranean.

The island has been divided between the internationally recognised Republic of Cyprus and the northern third under Turkish control since 1974 after Ankara’s troops occupied the area in response to a coup sponsored by the Greek military junta.

Ankara says its actions abide by international law and that it is drilling inside its continental shelf.

Turkey opposes unilateral moves of exploration activities by EU member Cyprus off the Mediterranean and says Turkish Cypriots have rights to a share of the island’s offshore resources.

Cyprus said this stance taken by Turkey was “cynical” and “hypocritical”.

“Turkey conducts its blatantly illegal activity in Cyprus…supposedly with the aim of protecting the rights of Turkish Cypriots, whilst at the same time claiming 44% of Cyprus’ EEZ, to the detriment of the lawful rights of all Cypriots,” said the statement.

Total and Italy’s ENI are heavily involved in exploring for oil and gas off Cyprus as is ExxonMobil of the US.

Turkey’s Energy and Natural Resources Minister Fatih Dönmez announced on Friday that the Yavuz drillship would be deployed off Cyprus to conduct drilling activities.

Nicosia has gone ahead with expanding its energy search at a time when Ankara is opposed to it while there is no political solution for Cyprus.

Turkish President Recep Tayyip Erdogan has warned foreign energy companies not to “overstep the mark” in disputed waters off the coast of the divided island.

Texas-based Noble Energy in 2011 made the first discovery off Cyprus in the Aphrodite block estimated to contain around 4.5 trillion cubic feet of gas – it has yet to be commercialised.

The discovery of nearby Egypt’s huge Zohr offshore reservoir in 2015 has stoked interest that Cypriot waters hold the same riches.

Cyprus aims for natural gas to start flowing to Egypt’s LNG facility in 2022, therefore generating its first revenue from natural gas in the same year.

Fugitive financier and Cyprus passport holder Jho Low may have

Air traffic at Larnaca and Paphos airports increased by 8.6%

It was pleasing to hear that, after three postponements, Cyprus

Turkey has purchased its third offshore drilling vessel which is

Fugitive financier and Cyprus passport holder Jho Low may have

Air traffic at Larnaca and Paphos airports increased by 8.6%