Berengaria, the once-proud mountain resort, is poised to revive its former glory as a royal playground with owners of the derelict hotel agreeing on a deal with property developers Planetvision.

Bank of Cyprus failed to sell the building at auction for €2.3 mln after coming into possession of the property through a debt-to-asset swap with a distressed borrower.

Afterwards, BoC decided to include the property in a toxic loan portfolio called Helix, which was subsequently sold to Gordian Holdings, a credit acquiring company.

The bank attempted to offload the hotel at the end of 2018 and early 2019 but failed to attract interest.

BoC had put a reserve price tag of EUR 2.36 mln on the property at the 2018 auction while attempting to sell the property to the highest bidder in early 2019 without a starting price.

As confirmed by Gordian Holdings, the two sides have come to an initial agreement, with the buyers planning to refurbish the legendary hotel.

Head of real estate department of Gordian Holdings, Pavlos Loizou, said the deal is being held up by red tape at the Town Planning Department and the Land Registry.

Angelos Pieri, CEO of Planetvision Properties, an innovative property development company, said that the project will certainly breathe new life to the area.

Pieri said that Planetvision is in talks with several hotel operators who have experience in managing mountain resorts of the size of the Berengaria.

One of them is world-renowned boutique hotel operators Sofitel, with which the company is cooperating to open the first Sofitel in Cyprus at Limassol.

Located in Prodromos village in the Troodos mountains, once the island’s most luxurious hotel, Berengaria has been disserted since the mid-1980s.

“We would like to see that changing. That is why we are looking into investing in more properties in the Troodos mountain range,” said Planetvision’s CEO.

He hopes that authorities will put into motion various plans declared for revitalising Cyprus’ rural and mountainous areas.

Pieri said that no incentives were given to the investors, nor has any authority contacted them or exhibited an interest in their plans for the estate.

Meanwhile, the hotel, which once played host to royalty from around the globe, these days is in a very bad state, made worse by the heavy rainfall of recent weeks.

However, It is estimated that some 200 tourists a week visit the hotel-situated at an altitude of 1,400 meters – attracted by the building’s architecture and macabre history.

Reportedly, the property is also used as a venue for rave parties. The current owner of the company has fenced off the site, however, the fence has been moved or even stolen.

Until the new owners have completed the acquisition of the hotel, Gordian seems ready to take all the necessary steps to avoid any risk to public health.

Gordian confirmed they are in touch with local authorities to take all necessary measures to keep visitors from entering the potentially dangerous site. 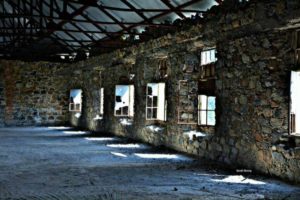 Hopes of seeing the hotel restored to its former glory were shattered last year when BoC had failed to sell the property at auction to the highest bidder.

The once illustrious hotel went under the hammer one more time in September 2018, with BOC failing to sell the property.

The auctioneer declared the big-ticket sale a no-go despite some interest shown as no bidder was willing to match BOC’s reserve price of €2.36 mln.

Once the most luxurious hotel in Cyprus, it was named in honour of Queen Berengaria of Navarre, wife of Richard the Lionheart, who were married in Limassol in 1191.

Located at Prodromos village in the Troodos mountains, the once-famous Berengaria covers an area of 26,520 sqm with the building itself covering 4,980 sq.m.

The stone-built mountain hotel opened in 1931 and closed in 1984, its rooms and halls that once entertained royalty are now home to dust, graffiti and exposed to the elements.

Having withstood the passage of time, the Berengaria has now become an unofficial and a rather dangerous tourist attraction with its share of myths and ghost stories surrounding it.

There are plenty of ghoulish stories to choose from; A former manager who killed himself is said to wander the empty halls in search of new victims, a merchant’s wife supposedly found dead in the swimming pool seeks revenge and a fair maiden dressed in white linen is said to be visible only during dusk leaning against one of the windows.

In the eastern part of the block there is a 60-year-old guesthouse with an area of ​​280 sqm on the northeast side there is a café-bar area of ​​200 sqm and an outdoor pool.

Electric arc across the eastern Med

Prey to the winds of fortune

Cyprus is cranking up its COVID-19 vaccine program covering 8%