UK Foreign Minister Dominic Raab said he is relieved at the four-month suspended jail term delivered on Tuesday by the Famagusta District Court against a 19-year-old convicted of a false rape allegation.

Asked whether he would now be making representations to Cyprus President Nicos Anastasiades for a pardon for the young Briton, Raab said: “Well I’m relieved that this vulnerable young lady will now be returning home to begin the process of recovery given all she’s been through.”

“I spoke to her mother on Friday. I understand quite how much she’s been through and what her family’s been through. So, my first priority, my first concern, has been her welfare. We will be following up on some issues in relation to the case. I spoke to the Cypriot Foreign Minister about that.

The Foreign Secretary said there is a broader issue for Brits travelling, not just in Cyprus or in the EU, but travelling abroad, whether it’s on holiday, whether it’s backpacking, and “making sure they can do so as safely and securely as possible.” 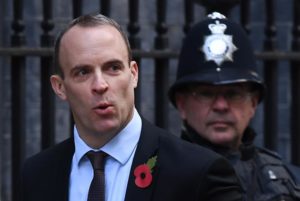 Raab said there were no immediate plans to change Foreign Office travel advice for Cyprus after the Ayia Napa rape case.

“We keep our travel advice under constant review, but there are no immediate plans. What we will want to do is have a conversation with our Cypriot friends and partners about that case once I’ve downloaded the full facts from the lawyer and the family.”

The 19-year-old woman hugged her family and legal team and left court weeping, head in hands after she received four months jail suspended for three years for public mischief.

Outside Famagusta District Court in Paralimni, the teenager’s mother addressed a crowd of cheering supporters.

She said: “On behalf of the family, I would like to say we are very relieved at the sentence that has been passed down today.

“I would also like to say thank you for all the support we have received throughout the globe.”

As supporters applauded, she added: “I just want to thank each and every one of you for turning up today, having belief, having faith and making sure we get justice.”

Power told reporters that they will continue to contest the teenager’s conviction.

“Whilst we welcome the fact that the sentence imposed today allows her to go home, we strongly contest the conviction and the fight for her innocence will go on regardless”, he said.

“We will be appealing the conviction and will take this case to the Supreme Court of Human Rights.

“We say and will maintain that this young girl was stripped both of her dignity and her basic human rights.

“She has been diagnosed with severe PTSD and this case has resulted in the deterioration of her mental health.”

The teenager has been stuck on the island after claiming she was raped by up to 12 Israeli tourists in a hotel room in the party town of Ayia Napa on July 17.

She was charged and spent about a month in prison before being granted bail in August.

The dozen young men and boys aged between 15 and 20 arrested over the incident were freed after she signed a retraction statement 10 days later.

She maintains she was raped after having consensual sex with one of the Israelis but forced to change her account under pressure from Cypriot police.

The case hinged on a retraction statement signed by the teenager following hours of questioning alone and without legal representation.

In finding the woman guilty of lying, the court said the woman was a “contradictory and inconsistent” witness.