Cyprus’ Meteorology Department issued a yellow warning for thunderstorms on Tuesday as bad weather on the island caused flooding and dangerous driving conditions.

The service issued its second yellow warning since the beginning of the year, which will last from Tuesday noon until 10 pm the same day.

The department warned that thunderstorms, probably accompanied by hail, are expected to affect many parts of the island.

It said accumulated heavy rainfall may exceed 50 millimetres within a period of six hours in some parts of the country.

On Tuesday reports of flooding from across the island were coming in, as rivers and dams overflow.

The fire department has been called out to help out distressed drivers trapped in their cars, especially in Limassol which seems to have been hit the hardest by the bad weather.

Earlier on Tuesday morning firefighters were called to rescue a distressed driver of a van who was trapped after Limassol’s Kalavasos dam overflowed.

The man was photographed standing on the roof of his vehicle as rescuers tried to get to him.

Three more drivers were trapped in their vehicles in Yermasoyia due to the overflow of the river. One of the drivers had also climbed on to the roof of his car as the vehicle began to take in water.

Members of the Fire department arrived at the scene with excavators to rescue the drivers from their vehicles. 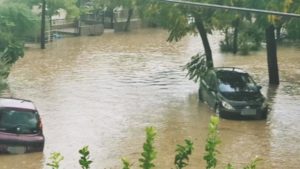 Cyprus is affected by a low-pressure system, currently above Rhodes, but slowly moving eastwards. According to the Met service, the low-pressure system will be affecting the island until Thursday morning, pushing temperatures down.

On Tuesday night the weather will be cloudy at times, with local rains and thunderstorms, with the island’s mountain’s areas seeing more snow.

Temperatures will drop to 6֯ C inland, around 9֯ C on the coast and -1°C degree on the higher mountains.

On Wednesday, the weather will be partly cloudy with local rains and thunderstorms, as well as snowfall in the mountains.

Temperatures will rise to 14֯C inland, around 17֯ C on the coasts and 2֯ C on the highest mountains.

Meanwhile, due to severe weather conditions, several roads in the Nicosia district have been closed:

In the Morphou district, authorities have closed the following roads:

Motorists have also been advised to be cautious on the Gourion-Macheras and Orkontas-Kato Pyrgos roads, due to the presence of rocks on the road.

Police said all roads leading to Mount Olympus in Troodos are closed to all vehicles including Prodromos, Platres and Karvouna.

Experts advising the government on coronavirus warned that if new