The 400-capacity ferry MV Daleela will embark on the first passenger maritime link between Cyprus and Greece for two decades, conducting 22 round trips between Limassol and Piraeus this summer with a three-year agreement worth €16.4 mln.

Passengers onboard the 30-hour voyage will pay anything from €38 for a seat to €80 per person in a premium cabin each way, about €101 for a car and €63 for a motorcycle.

Bicycles will be carried free, and the ship has a pet-friendly policy, with special rates for an in-cabin stay or kennels.

Deputy Shipping Minister Vassilis Demetriades announced on Friday the operator of the EU-subsidised line, Scandro Holding, will run four round trip voyages in June, eight in July, seven in August and three in September.

This is the first time the ferry link has been revived after being abandoned for 21 years.

Top Kinisis is the main ticketing agent with bookings available from May 7.

“The voyages will depart from Limassol for this year, and it is up to the company to include Larnaca port as of next year.

“People who are afraid of flying, university students, travellers who want to take their cars or motorcycle on a trip, now have an affordable alternative for travel to Greece, which I hope will also attract maritime tourism from Greece and Europe.

“This is one of the 35 actions of our policy to promote a maritime culture, to love the sea, to be closer to ships and to enjoy sea transport,” Demetriades said. 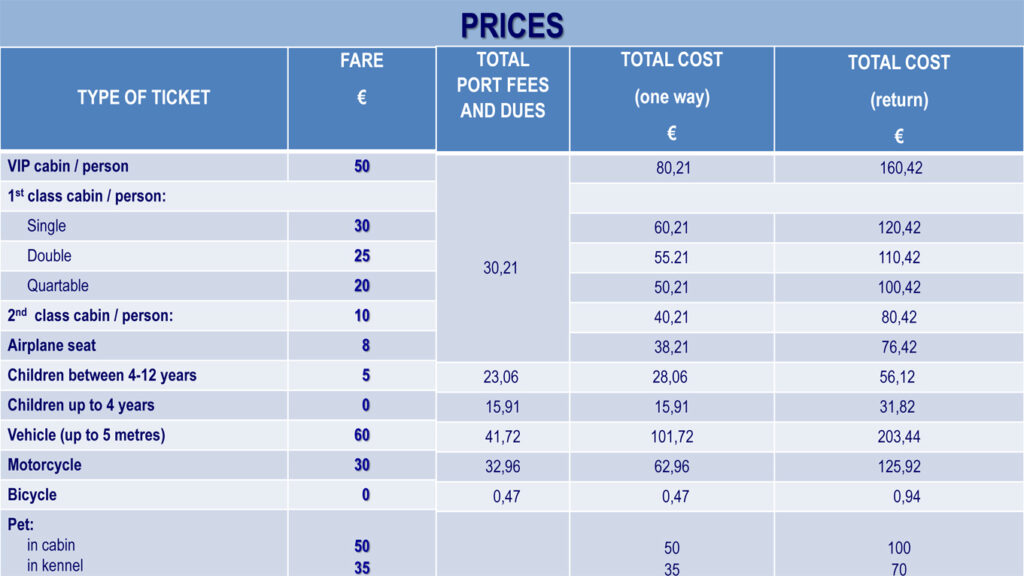 After several attempts dating back to 2020, due to lack of interest, the final round of the competition got underway on November 25, 2021, and the tender review process concluded on January 28.

The three-year contract is valued at €33 mln, with annual state aid of €5.5 mln, under a public service obligation (SGEI – Service of General Economic Interest).

Having not met some conditions, the tender was improved, one bidder remained, and under the guidance of the Accountant General, negotiations got underway with the preferred bidder, Scandro Holding.

To make the unwanted tender more attractive to operators, the government increased the subsidy for the ferry link by €500,000 to €5.5 mln, considering the increase in fuel cost.

CEO Marios Michael said the company comprises “people and organisations that have a long experience in shipping, such as Limassol-based Acheon Akti Navigation (headed by Charalambos Manoli), a Limassol-based ship management company with 20-year experience and a 50-strong fleet of mainly vehicle carrier vessels.”

“We have improved the tender terms by adding an extra bar and children’s play area. Meals in the restaurant will not exceed €12.

“We also secured a bigger-capacity ferry.

“From the 100-passenger initial requirement, the ministry increased this to 200 passengers with a capacity of 140 more in cabins.

Deputy Minister Demetriades said the 1991-built ferry sails under the flag of Cyprus since 2019 and was inspected in Suez port just two weeks ago, ensuring the vessel’s seaworthiness.

“It is in excellent shape, meets all safety requirements, and I will personally board the ship for its voyage from Egypt next month.”

Demetriades thanked a long list of officials in Brussels, Greece, and Cyprus who helped make this mission a reality.

He said he was grateful to then-Larnaca MP and current House President Annita Demetriou and MP Nicos Tornaritis for embracing this project and seeing it through, despite all the challenges.

“This service should continue even after the EU subsidy ends, and we all need to make sure it will remain commercially viable.”

Next year, the operator may start the ferry in April or May.

Asked about stops in other countries to ensure the line’s viability, Demetriades said: “I believe that in the future, connectivity is more viable to nearer destinations such as Israel, which the operator will consider.”

Scandro’s CEO confirmed that his company is discussing this option with authorities in Israel.

In December, Israeli officials welcomed the efforts to reinstate a maritime passenger link with Greece, expressing their interest in expanding the connection to include Israel.

Demetriades and the Israeli Minister of Transport Merav Michaeli discussed the venture.

They agreed that expansion to Israel “would facilitate the free movement of people and enrich the available options for transportation between the three countries, which are currently limited to air transport”.

They acknowledged that a possible extension of the Cyprus-Greece sea connection to Israel would create a new market for tourism between them and Europe.

Salamis Tours operated the last passenger ferry link to Greece from 1993 until 2000, when demand faded and trips stopped.