The pro-Turkey ruling National Unity Party (UBP) was the victor of the general election held in the Turkish occupied north on Sunday, as it garnered almost 40% of the vote.

UBP failed to reach its target of 26 seats, which would have given the party majority rule without forming a coalition.

UBP gets 24 seats, CTP 18, DP three, HP three, and YDP two in the 50-member parliament with the current standings.

Compared to the previous election in 2018, CTP increased its electoral base by 53%, gaining an additional four seats, while Kudret Ozersay’s HP saw his deputies decrease from nine to three.

UBP will be given the mandate by Turkish Cypriot leader, Ersin Tatar, to form a ruling coalition with one of the other parties.

Analysts say that UBP will turn to the Democrat Party’s three deputies for support.

A minimum of 26 deputies are needed to form a ruling coalition.

The Turkish Cypriot election was held amid a worsening economic situation and the coronavirus pandemic, with the Cyprus problem very low on the political agenda.

Due to a sinking Turkish lira, the Turkish Cypriot economy suffered from food-price inflation, reaching 37.4% in September.

Meanwhile, imports and transactions such as rent payments and loans denominated in a foreign currency increased.

Talking after his party’s victory on Sunday night, UBP’s leader Faiz Sucuoglu said he was certain the new ruling coalition would be in a position to overcome ongoing economic difficulties.

Sucuoglu said Turkey has always unconditionally helped the Turkish Cypriots and will continue to do so.

“We will be spending more time with Ankara in this new era.”

“We may be two separate states, but we are one nation,” Sucuoğlu said, adding the breakaway state part of the ‘Turkish nation’.

UBP, once led by Tatar, in recent years has been a proponent for a two-state solution to the Cyprus problem, seconding Ankara and Turkish President Recep Tayyip Erdogan.

Main opposition CTP chair Tufan Erhurman told reporters the party was happy to see its voting base grow by over 50%.

He said his party would work harder as the opposition to adopt a harsher stance against “wrongful” policies. 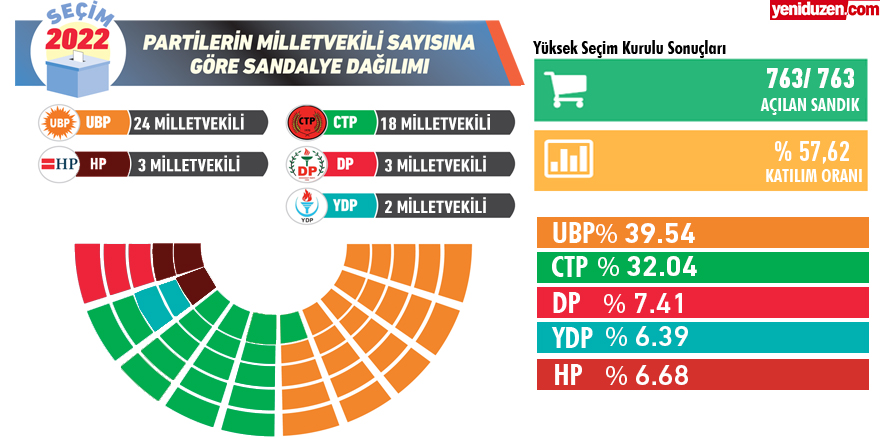 An election of zero expectations

University of Nicosia scientists have simulated what would happen if

An election of zero expectations