Hundreds of data collectors will be taking to the streets as of Friday, in the first population census to be carried out in Cyprus since 2011, and the last which will be conducted in the traditional way of door-to-door visits.

The Statistical Service Cystat will use the data collected in the census as the basis for the creation of a dynamic Statistical Population Register, which will be updated annually through administrative sources.

In future, the creation of the population register will eliminate the high cost of conducting population censuses, citizens will no longer be burdened with the response obligation and the continuously updated data can be used for policy-making purposes on an annual basis.

The first results are expected to be announced in January 2022 and will contain aggregated data.

Census takers will be visiting households and institutions, such as nursing homes, with the purpose of composing a complete and accurate geographical coverage of Cypriot and foreign nationals, who have their usual residence in the government-controlled areas.

The data collection will be carried out by trained enumerators, who will record the information on electronic forms saved on tablets provided.

Census takers will be wearing distinctive clothing and will carry a badge with the special Cystat identity which will certify their authorisation to collect information.

Some 1,000 census takers and 100 inspectors will be carrying out the census.

In the case where residents are affected by the Covid-19 pandemic or for other reasons they are unable to carry out a face-to-face interview, the procedure will be done either by phone or through a printed questionnaire.

In addition, census takers have been paid €360 for partaking in a training session. Inspectors, who will be leading teams of ten, will be taking home a salary of €1,450 a month. The census process will last to December.

The total budget for the population census is €4.6 mln.

Cystat noted that census takers will be abiding by all appropriate COVID-19 measures. Additionally, a health protection protocol specifically prepared by the Ministry of Health for the census will be applied.

The Statistical Service is obliged to safeguard statistical confidentiality, according to the Official Statistics Law of 2021 (Law No. 25(I)/2021) and the protection of personal data in compliance with the provisions of the General Regulation on Data Protection (EU) 2016/679 (GDPR).

Cystat urges the public to cooperate with census takers for a better outcome.

The first population census in Cyprus was conducted in 1881 and until 1931, censuses were conducted every ten years.

After 1931 and due to World War II, the next census was conducted in 1946 and then in 1960 with the declaration of the Republic of Cyprus. This was followed by the census of 1973 and then the census of 1976 due to the rapid changes brought about by the Turkish invasion.

The next census was conducted in 1982, followed by those in 1992, 2001 and 2011, where the latter recorded a population of 856,960 persons in the government controlled areas. The population growth at census years is depicted in the following graph. 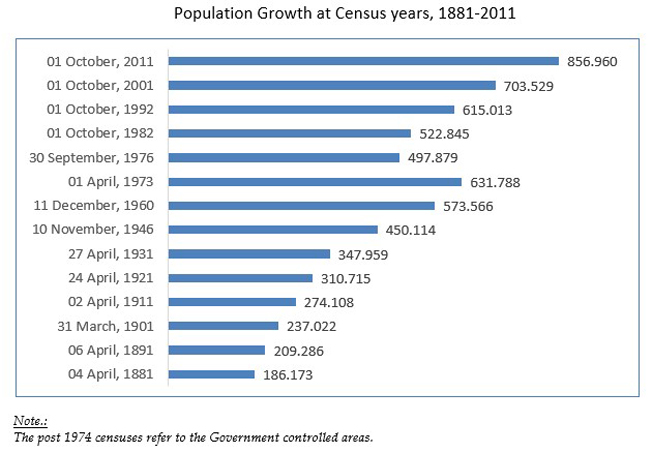 Cyprus and Israel will conduct their largest joint military exercise