Germany is heading towards a three-party government with a significant climate action focus, as the centre-left Social Democrats made an unexpected comeback and scored a thin victory in Sunday’s federal elections.

The long-ruling conservatives fell below 25% and slumped to their worst result ever, with the country not knowing chancellor Angela Merkel’s successor for weeks, if not months.

The leaders of both the SPD and the CSU/CDU vowed to talk to the Green party, which recorded its best result ever rising to 14.8%, and pro-business Free Democrats up at 11.5% to form the country’s first three-party government, according to a leading news portal.

Clean Energy Wire said that climate action will be at the core of any new coalition.

The conservative alliance of CDU and its Bavarian sister party CSU scored their worst-ever result with their chancellor candidate Armin Laschet and fell to 24.1%, shedding almost nine percentage points.

At nearly 15%, the Green Party achieved the best result in its history and is the third strongest camp in the next parliament, with gains of about six percentage points compared to 2017. 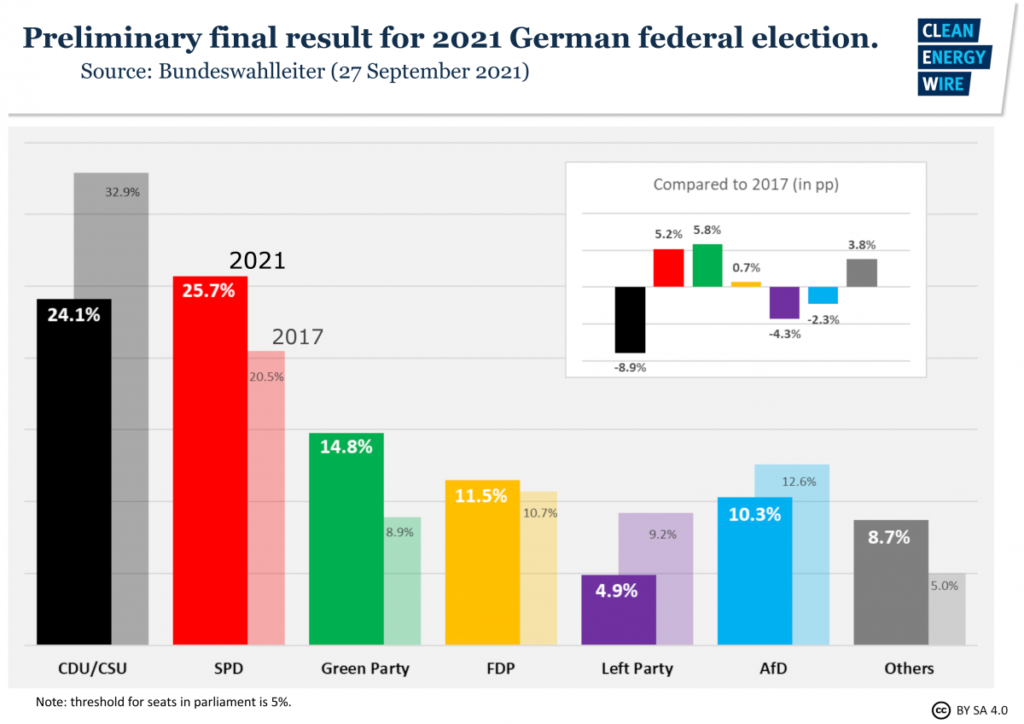 All major parties vowed to make climate action a central focus of the next government, the Clean Energy Wire said.

Current finance minister Scholz, who emerged as the surprise favourite among voters during the final weeks of the campaign, said it was his intention to form a climate government that speeds up renewables expansion.

Laschet said Germany needs “a coalition for more sustainability in every sense, in climate action and finances.” He added the government had a responsibility for future generations.

“We have to meet this responsibility better than so far, in particular in climate action.”

The Greens’ Annalena Baerbock said: “This country needs a climate government, that is the result of this election.”

“It’s already clear: The climate is the winner of this election,” said Kai Niebert, president of the environmental umbrella organisation DNR. “It’s no longer a green topic, but one of all democratic parties.”

Three-way coalition on the horizon

The close result leaves open who could lead the next government and follow as chancellor on Angela Merkel, who is stepping down after 16 years in power.

Both Scholz and Laschet said they are hoping to establish a new government by Christmas. The results indicated that a three-party coalition of either CDU/CSU or SPD with Greens and pro-business Free Democrats seem the only viable options to form a government.

In their first televised meeting hours after the poll closed, Scholz and Laschet both acknowledged that the next government would very possibly be resting on a three-party coalition, thereby giving a cautious rejection of a renewed ‘grand coalition’ between the SPD and the conservatives.

FDP leader Christian Lindner and the Greens’ Baerbock both suggested that their parties should initiate talks, instead of negotiating first with either SPD or conservatives, in order to find common ground for a coalition.

Creating the next German government “is not about finding the lowest common denominator [between parties] but about setting the course for the future of this country,” Baerbock said.

The FDP’s Lindner added: “I think the next government will be much more ecological. We have to take note of the Greens’ election result.”

The parties will have to overcome differences which could lead to drawn-out coalition negotiations.

The Greens have favoured an early deadline for the coal exit and an end date for the sale of combustion engine cars. Like the SPD, they favour large-scale investment programmes, funded potentially through government debt or higher taxes.

The Free Democrats have ruled out bans or tax increases, calling for technology-open, market-based solutions that are centred on carbon pricing, and like the conservatives have vowed to ensure stable public finances.

The 2021 vote has often been labelled a “climate election”, and throughout the campaigns climate action featured high in the debates and party programmes.

The issue gained additional prominence after deadly floods in western Germany in July, which scientists largely attributed to climate change.

Climate activists and researchers still criticised the lack of ambition and hundreds of thousands of mostly young people took the streets to call for more climate action two days ahead of the election.

Veronika Grimm from the German Council of Economic Experts and Ottmar Edenhofer from the Potsdam Institute of Climate Impact Research (PIK) also emphasised the need for international climate cooperation, for example through the creation of a so-called ‘climate club’ between Europe, the US and China.

“All all parties face the same challenge: limiting climate hazards such as floods and heat waves, and speeding up climate policy as economic policy,” Edenhofer stressed.