He said the four charred bodies were found in an area where the fire reached.

“Forensic examiners are going to the scene for identification while all the indications support the fact these are the four missing persons we have been searching for since yesterday (Saturday)”.

Nouris called Saturday’s wildfires in Limassol and Larnaca the most catastrophic since the establishment of the Republic of Cyprus.

The fire has been contained within an area covering 35 kilometres with the use of drones.

On Sunday, a Limassol District Court remanded a 67-year-old for eight days in connection with the fires.

According to eyewitnesses, he was seen leaving his field shortly before the outbreak of the fire.

President Nicos Anastasiades described the situation as “a tragedy”. 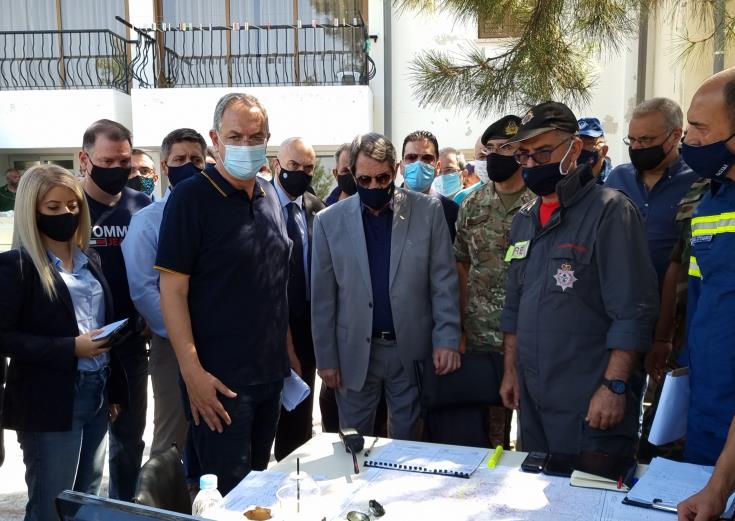 He visited the Crisis Management Centre in Vavatsinia village to be fully briefed on the situation.

“It is one of the most devastating fires and, unfortunately, with human casualties.”

He said the whole situation is under partial control, but they were worried about the possible increase of the winds at noon.

He said the fire destroyed an area “exceeding 55 square kilometres”.

Although the large fire is contained, some areas could rekindle due to the high temperatures and the wind.

Two aircraft have arrived from Greece, and another two from Israel are expected Sunday.

“The whole situation is under partial control. What worries us is the possible increase of the winds at noon.

“Measures have been taken so that there is a slowdown zone; in all communities, there are units of the Fire Brigade.

“The message I want to send to the people who have lived through these tragic moments and who have lost property is the Government will offer immediate help,” said Anastasiades.

The President said that he would visit the affected villages of Ora, Akapnou, Eptagonia and Arakapas.