It reported that the cost of a week’s holiday can be as low as £100 p.p. including the flight cost, which may be hard to believe.

The Daily Mail mention of Cyprus refers to two different areas, Limassol where prices have gone up (actually, doubled), in other areas prices are not so much reduced as expected, which I can also confirm.

It classifies Cyprus as a “low risk” destination due to the coronavirus, whereas Greece is seen as the safest in Europe.

Based on the Daily Mail report, here is a table of comparative cost. 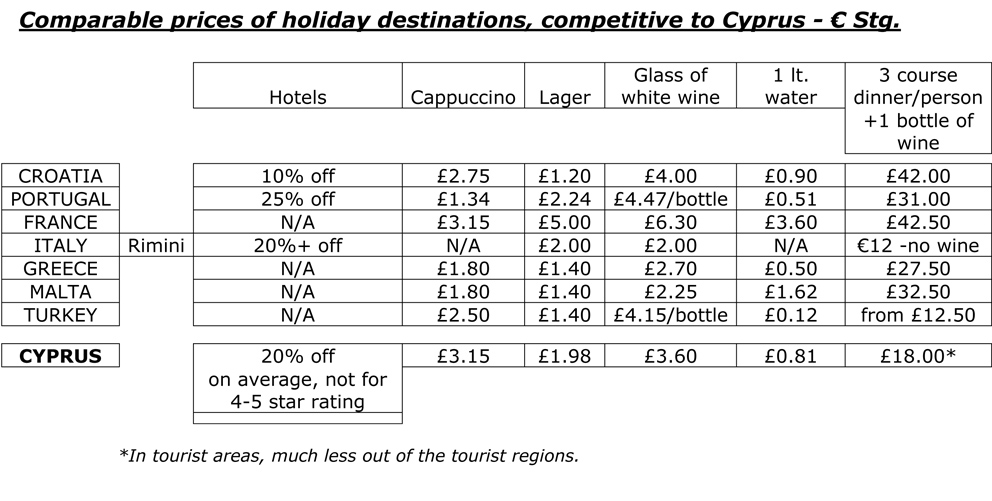 Based on the report, I noted that it misses our major asset, that Cyprus offers to those who contract the virus, the Government will bear the cost of care and accommodation at no charge to the holidaymaker.

I believe that our competitors do not offer this.

Also, the newspaper story does not mention personal security, the quality of family living, widely spoken English and driving on the “right side” of the roads.

What we must consider here are hotel charges for locals which are discounted in the 1-3 star hotels (be it 20% less) than the pre-virus situation, although the 4+5 star units may offer a maximum 10% discount.

Our hoteliers in general, although nowadays depend to a large extent on local holidaymakers, seem to be charging “as usual”.

Perhaps their thinking is, “wait and see when the British market revives” (August) and hopefully the Russians will come (perhaps September).

Hoteliers are taking a big risk, but they do not have our sympathy on this.

They got a lot of financial support from the government over the last three years and they were doing extremely well (as did the rest of us), the government pays for marketing and promotion.

Even now with the virus, they get hefty subsidies of 60%+ for the payroll and other tax incentives, postponement of debt instalments.

One hotelier I spoke to said, “we are keeping all our staff and we know that we are losing, but the staff was with us during the good times, we cannot let anyone go”.

Well done, but this is a rare comment from hoteliers.

At a kiosk on the beach, run by a hotel, which is selling juices and coffees, the waiter there told us, “I have received €8 for the whole day, but my salary is far more. I thank the management for supporting me”.

Can you get more loyal staff than this?

Cyprus has lots to offer

I expect that such hoteliers will not suffer due to the lack of staff when better times come while others who are shortsighted will bear a loss and staff problems.

Another interesting article was published by Germany’s Deutsche Welle which reported that retirees from Germany stand a lot to gain in taxation terms, due to the difference in taxation between Greece and Germany.

Greece has introduced a tax incentive regarding foreign retirees who settle permanently in Greece in that they will be charged 7% only for the first 10 years on all their income worldwide.

It is an attraction, but not as good as Cyprus incentives offered to foreign people provided they are tax residents in Cyprus (over 183 days p.a.).

However, if a foreign employee resides 60 days during a whole year or they are an employee of a company with business in Cyprus and subject to income tax, the Cyprus tax system is most attractive.

Less than Greece which does not provide such a scheme, whereas foreign pensions in Cyprus are taxed only at 5%.

Not a comprehensive report by any means, but the Deputy Ministry of Tourism should take note of how other countries are promoted in this competitive tourist market.

We should get our own international journalists to do write-ups in the most popular media in countries that we aim to attract tourists and real estate investors from.

Such reports on tourism have their effect on real estate demand, since it also reflects the cost of living for permanent/holiday homeowners, whereas untapped markets such as Germany and Poland may not be aware what we have to offer.

If we believe in the Education Ministry, the school system

Regional energy regulators meeting in Larnaca this week concluded that

MPs are undecided on whether to pass a European Union

Justice reform, a long-overdue process to slash legal proceedings by